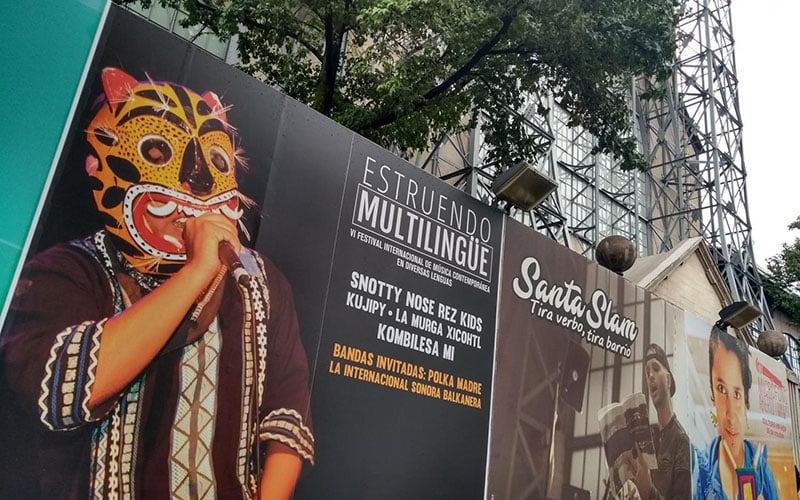 El Chopo Museum is one of the main spaces in Mexico City to see and hear contemporary indigenous musicians. (Photo by Rodrigo Cervantes/KJZZ) 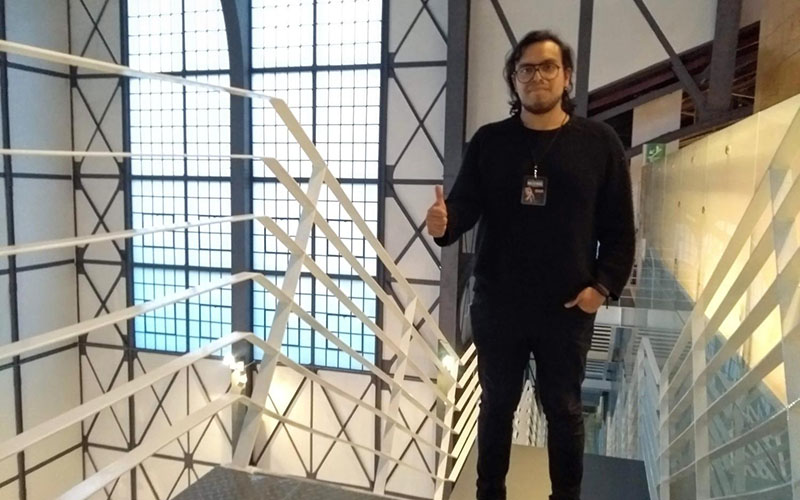 Edgar Ruiz, who runs an indigenous music festival at El Chopo Museum, says the cultural clash started by the arrival of the conquistadors isn’t over yet, and music has been a way to resist for the past 500 years. (Photo by Rodrigo Cervantes/KJZZ)

MEXICO CITY – Music can be used to build bridges or to protest injustices. And when it comes to new indigenous music, it also is a way to preserve languages and culture – and fight against the atrocities of colonialism.

The anti-establishment roots of rock and hip-hop find fertile soil in indigenous cultures.

In a music festival in Mexico City’s El Chopo Museum, a hip-hop band teaches the audience some Native American words to sing.

“In Indian country land, we have a slang, right? That’s ‘skoden,'” said Young D, one of the emcees for Snotty Nose Rez Kids. “Skoden is a combination of ‘Let’s go then,’ an example of ‘vamos.'”

Yung Trybez is the other emcee for the First Nations duo, who hail from British Columbia, Canada. He says he and Young D grew up listening to such rappers as Tupac and Notorious B.I.G.

“It’s dubbed indigenous hip-hop, but it’s just hip-hop in general, ’cause we’re talking about people that’s been oppressed for hundreds of years,” Yung Trybez said. “I mean, first of all, before music, we talk about our lives, you know, and this has been our lives since we were born, and that’s all we know. And when you talk about indigenous people, you can’t talk about them without talking about land.”

For him, hip-hop is a vehicle to bring light to the problems their communities still face after the European colonization, like land theft, oppression, racism and environmental destruction.

“If we weren’t colonized, this world would be fine, I think,” Yung Trybez said.

Changing Columbus Day to Indigenous People’s Day is just a bread crumb thrown to the indigenous communities in the U.S. and Canada, he said.

“They talk about truth and reconciliation, we’re telling our truths, they need to hear it, and then they need to do a lot of work. Land back!” he said.

Snotty Nose Rez Kids uses music as a way to open dialogues, but other musicians are using it to preserve and revitalize the legacy of the indigenous cultures. That’s the case of La Murga Xicohtl, a band from the state of Tlaxcala in central Mexico.

La Murga Xicohtl mixes gypsy music, rock and local carnival sounds while incorporating Náhuatl, the language used by the Aztecs of the past and by Nahua communities today. The group started playing music for the theater, but it eventually evolved into its own project.

Manuel Tlapa, the band’s guitarist, said he’s been influenced by rock, jazz and even thrash-metal, yet, “Musically speaking, Náhuatl very melodic and pleasant to the ear.”

For him, using Native languages is a way to honor their roots while helping reinforce Mexico’s identity and sometimes forgotten origins.

“Historic events like the colonization can’t be amended,” Tlapa said, adding that the arrival of the conquistadors was tragic, but it also enriched the culture by bringing more ingredients to it, including musical instruments.

Edgar Ruiz is a music curator, sociologist and anthropologist in Mexico City. He’s also in charge of an indigenous music festival at El Chopo Museum in the nation’s capital.

Ruiz says the cultural clash started by the arrival of the conquistadors 500 years ago isn’t over yet, and music has been a way to resist for all those centuries.

“Music (like hip-hop and rock) is not colonizing native languages, but these languages are actually using it as a means of preservation,” Ruiz said.

Many current indigenous traditions are part of a process of cultural appropriation, as they incorporate European or American instruments and rhythms to traditional rituals and music, he said.

“Social tensions built by centuries of colonialism currently result in migrations,” said Ruiz, as many indigenous people have to escape discrimination, oblivion and poverty. Indigenous migrant musicians are integrating their experiences into their songs, he said.

“Mainstream will eventually turn around and will notice and adopt indigenous music,” he said, using reggaetón as an example of contemporary Latino music that has become universal.

Meanwhile, globalization and the internet will facilitate the exchange of music, he said, while expanding the reach of its message. That’s evident in a lyric from Snotty Nose Rez Kids: “You bettah understand, I live for the mic, but I’ll die for my land!”