Aron Baynes, left, and Ricky Rubio are each playing some of the best basketball of their careers for the Phoenix Suns. (Photo by Karrissa D. Herrera/Cronkite News)

PHOENIX – A couple of years ago, it took Aron Baynes 75 games to make his first three-point shot of the season for the Boston Celtics. He ended that season an unsightly 3-of-21 from behind the arc, but in that season’s playoffs, the veteran role player provided a glimpse of what kind of player he could become.

Now, the burly 6-foot-10, 260-pound Australian has blossomed into that player for the Phoenix Suns.

Baynes’ 2017-18 playoffs might be remembered as much for his Twitter mentions as his play in a run to the Eastern Conference Finals, where Boston lost to LeBron James and the Cleveland Cavaliers.

During that series, Twitter-happy Philadelphia 76ers center Joel Embiid took to social media to take a shot at Baynes.

“Man bun is in NBA just to get dunked on,” he tweeted about Baynes, who was sporting a red-haired knot atop his head at the time.

Never mind that Embiid was viewing the game from his couch after Baynes made seven of 16 three-point shots during the previous round, helping to eliminate the Sixers in five games.

The following season, Baynes’ attempts and percentages from behind the three-point line took a leap, but few – including the Celtics, who traded the 32-year-old and the rights to point guard Ty Jerome to the Suns for a 2020 first-round pick and cap space – anticipated the havoc Baynes was about to create for Phoenix opponents.

Playing against his old Celtics teammates on Monday night, Baynes made his 23rd three-pointer of the season, two more than his previous season-best. He’s now shooting 44 percent from long distance in 12 games and has been one of the league’s most efficient scorers. Among players who average more than four or more three-point attempts per game, Baynes’ percentages place him in the top 15 in the NBA.

Filling in for the suspended Deandre Ayton, Baynes compiled a team-leading 1.5 win shares over the Suns’ first dozen games as Phoenix started a surprising 7-5. He’s blasting past his career highs in nearly every major category, averaging 14.5 points, 5.6 rebounds and 3.1 assists in 24 minutes a night. Last season, he averaged 5.6 points, 4.7 rebounds and just over one assist in 16.1 minutes.

Although it’s early in the season, Baynes’ production has put his name squarely into the conversation for the NBA’s Most Improved Player award.

“I think Aron this year has seen his game take new levels,” said Devin Booker, the only Sun with a better shooting stroke thus far. “He’s helping everybody with his screening ability, his voice leadership, his action leadership and his approach every day.”

In many ways, he’s the same player he’s been since he entered the league seven years ago. Baynes continues to be a bruising and versatile defender who can bang inside and still step out to the perimeter to knock down shots.

“He’s guarded (76ers point guard) Ben Simmons, he can switch one through five, he can guard the guards,” Booker said. “Being a guard, I know it’s tough to finish around the rim around a guy like him.”

Baynes has developed a reputation as an enforcer around the NBA and as someone players would want on their side in a fight, be it real or metaphorical. Boston’s Jaylen Brown, prior to the Celtics’ reunion with Baynes on Monday, affectionately called Baynes “crazy as hell.”

Booker, when asked if he’d seen that side of the Aussie, confirmed Brown’s assessment.

And while Baynes’ three-point breakthrough has been a surprise, it’s actually a perfect extension of his game in 2019. Rather than wait in the corner for a drive-and-kick pass, as stretch bigs like Houston’s P.J. Tucker have successfully done, Baynes utilizes his top-tier screen game to create space for a teammate handling the ball, or for himself.

The play shown here between Baynes and backup Suns guard Jevon Carter demonstrates the kind of two-man game that has been key to the Suns’ early offensive efficiency:

sooo about that 3-point contest…. pic.twitter.com/dK2bi8r4Fb

Carter jets to the right around a Baynes screen on Boston guard Kemba Walker but changes direction as his path to the rim closes. Baynes reacts quickly, flipping his screen before popping out just beyond the three-point line. Carter makes the smart pass to Baynes, who has a healthy cushion between him and the nearest defender, Enes Kanter.

Carter saw a minutes boost with Ricky Rubio out against the Celtics, but high-IQ plays like that have become a signature of the ball-movement offense of coach Monty Williams. 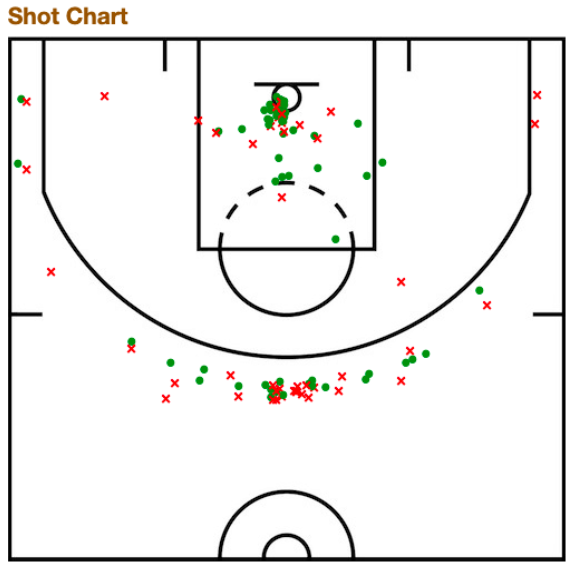 All of Baynes’ three-point attempts this season have been of the catch-and-shoot variety, and 88 percent of them have occurred above the break, per NBA.com. As in the play above, Baynes has usually found himself wide open. Nearly 80 percent of his made threes have come with at least six feet of space.
And he has been especially effective when he’s on the floor with Rubio, the club’s veteran playmaker who was also added in the offseason. Nearly 70 percent of his three-pointers have come off a Rubio assist.

With Rubio’s wizardry and Baynes serving as an effective release valve for the offense, Suns fans are witnessing some of the team’s best basketball since two-time NBA MVP Steve Nash was at the controls.

Not surprisingly, both veterans credit team chemistry and hard work for the quick start.

“That’s one thing I have confidence in. Everyone here is buying into the system and wants to get better,” Baynes said. “It’s fun coming into work every day with these guys.”

“The team is showing that it’s connected,” Rubio echoed, “and that’s really powerful.”

The Suns are about halfway through Ayton’s 25-game suspension, doled out after testing positive for a banned diuretic. Ayton, who began serving the suspension after playing in the season opener, can return December 17.

In the meantime, Baynes has absorbed the young star’s minutes, and fellow big man Frank Kaminsky slid into the rotation behind Baynes and power forward Dario Saric.

While Ayton, the No. 1 overall pick in the 2018-2019 draft, is expected to move back into his starting role and has been able to practice during his suspension, Baynes has made a strong case for a larger role than Williams and his staff might have anticipated when “man bun” arrived.