Seen by some as an afterthought in NBA free agency, Ricky Rubio has found early success in Phoenix. (Photo by Karrissa D. Herrera/Cronkite News) 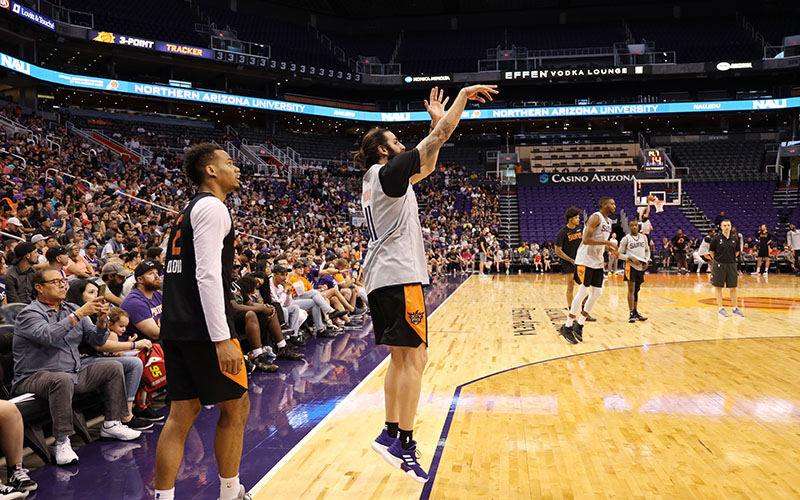 PHOENIX – Those who have the opportunity to talk with Ricky Rubio surely notice two things. The first, obviously, is his well coiffed beard. The second is that he can barely be heard.

Deandre Ayton described him as the kind of person you need to go out of your way to make eye contact with just to say hi. That rings true in interviews, too, as Rubio tends to speak at a volume only a tick higher than a whisper and with a tone that comes across as “who, me?”

It would be a mistake, though, to assume Rubio’s temperament prevents him from leadership. On the first day of Phoenix Suns training camp in October, well before the team got off to its hottest start in a decade, coach Monty Williams was eagerly anticipating his new point guard’s impact on a team hungry for direction.

“When you look at what he did at Minnesota, what he did in Utah with young guys … he is a natural leader,” Williams said of the 29-year-old Rubio, who is entering his ninth NBA season. “Guys follow him.” 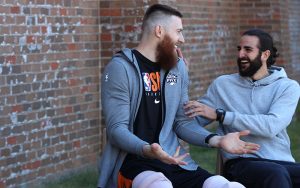 Even with a more reserved personality off the court, Rubio has been a clear leader for the young Suns. (Photo by Karrissa D. Herrera/Cronkite News)

Rubio, perhaps realizing he had signed up to play with guys who’ve only experienced Michael Jordan through “Space Jam” and YouTube, said in camp that he planned to be more of a presence this season.

“Experience gives you something that you know when to talk and when not to talk,” Rubio said. “I’m trying to do that. I’m trying to be more vocal out there on the court, but at the same time lead by example, too.”

It may feel like ancient history now, but the Suns’ signing of Rubio to a three-year, $51 million contract was roundly criticized both in and out of the league. In July, ESPN asked 20 NBA coaches, executives and scouts what the worst move of the offseason was. The Rubio deal tied for top billing.

“They paid him a lot of money, and he isn’t very good,” an unnamed Eastern Conference scout was quoted as saying.

Rubio, a career 38.9 percent shooter, hasn’t suddenly turned into a terrific scorer overnight, but he is making 42.5 percent of his shots and 40 percent from behind the arc. He’s getting to the free throw line, and if you exclude Ayton’s lone game, he’s leading the Suns in rebounds with 6.4 per game. And after averaging just under 5.7 assists per game the past two seasons, he’s back to– well – Rubio levels, dishing out 8.8 assists through this early season, good for third best in the NBA.

In short, he’s far exceeding his production in his two years with the Utah Jazz and is laying the foundation for his best professional season.

Of late, Rubio has given Phoenix fans flashes of Steve Nash, dancing through Nets and Lakers defenders to the tune of 21.5 points and 11 assists in his last two games. After his run-in with Brooklyn, he spoke about his numbers surge exactly the way you’d expect from an old school, pass-first point guard.

“I don’t have stat goals,” Rubio said. “I’m just here to really give what it takes to win.”

Think #Suns fans have seen plays like this before…👀

Just as Williams hoped at the start of the season, Rubio’s mentality has rubbed off on the young Suns. The Suns boast the fifth-best net rating in the NBA (a measurement of a team’s point differential per 100 possessions) and are tops in the league in assists and field goal percentage.

Rubio isn’t the only reason for Phoenix’s success. Nearly every player General Manager James Jones brought in this offseason – from Aron Baynes on down the depth chart to Jevon Carter – is outplaying expectations, and Booker finds himself in the nonexistent 50-50-90 club. That’s greater than 50 percent from the field, 50 percent from three and 90 percent from the free throw line.

“The system, Ricky, Aron Baynes’ screens, spacing, all of it comes into play,” Booker said of the most efficient stretch of his career.

One of the primary concerns heading into the season for Phoenix was how Rubio would pair with Booker, who is in his fifth year in the league. After all, the 23-year-old transformed into “Point Booker” last season, posting career highs in points and assists. Critics of the deal speculated Rubio would stunt the growth of the Suns’ budding superstar.

Instead, Rubio’s presence looks to be actually relieving Booker of an awful lot of responsibility.

Ricky with the delivery
Devin with the bucket

Last year, Booker had the third-highest usage percentage in the league of any player who averaged 15 minutes or more, higher than Giannis or LeBron. This season, Booker’s usage percentage ranks 28th.

“I think the last few years I’ve struggled shooting-percentage wise,” Booker said. “But anybody who knows basketball knows that rhythm and flow is very important while you’re out there, and we have that.”

Rubio may never get his proper due for helping to jump-start this team, but rhythm and flow? That’s Ricky Rubio.