Farmworkers pick lettuce in Yuma in this file photo from 2012. A new bipartisan bill in Congress aims to ease ongoing problems that U.S. farmers have in getting immigrant farmworkers. (Photo by Michel Duarte/Cronkite Borderlands Initiative) 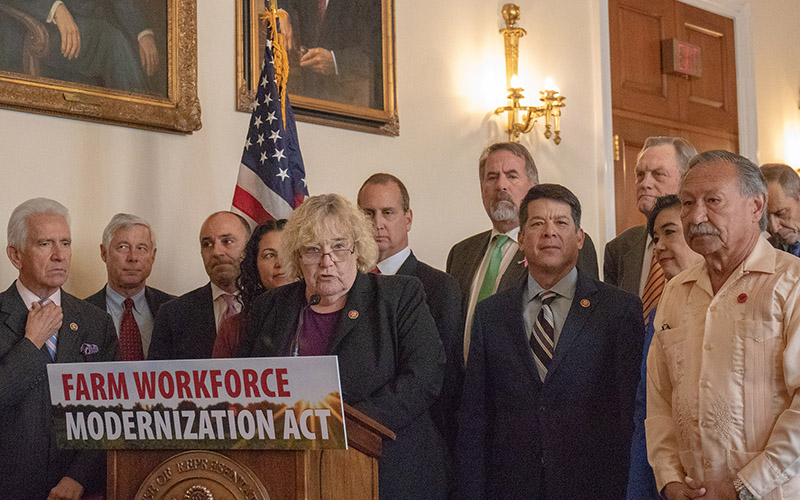 Rep. Zoe Lofgren, D-Calif., with Democratic and Republican colleagues who sponsored the Farm Workforce Modernization Act, and with farm groups and farmworker advocates who back the bill. (Photo by Megan U. Boyanton/Cronkite News) 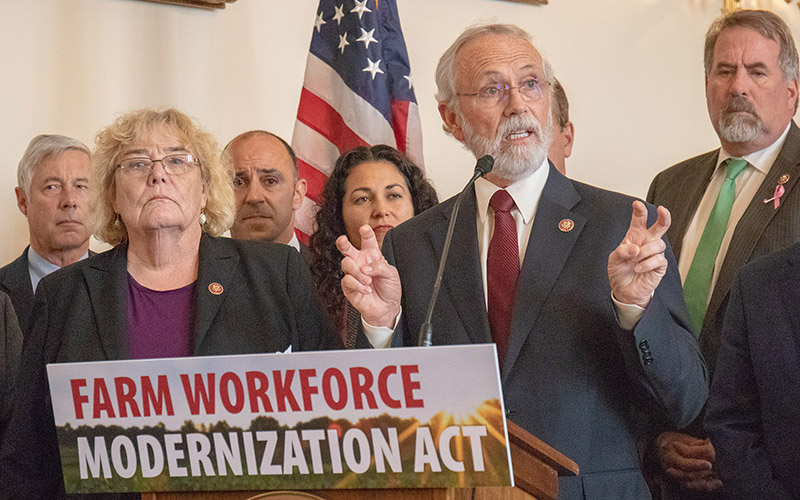 WASHINGTON – Arizona farm groups said a proposal to expand the immigrant workforce and make it easier for those workers to stay in the U.S. is an important first step toward solving the problem of getting and keeping reliable workers.

But it’s only a first step, they said, and will need further tweaking.

The farm groups were referring to the Farm Workforce Modernization Act, a bipartisan bill introduced this week by Reps. Zoe Lofgren, D-Calif., and Dan Newhouse, R-Wash. The 224-page bill would expand the number and type of agricultural visas, streamline the hiring process, set housing and wage standards for workers and allow established workers to apply for legal permanent resident status.

It had the endorsement of more than 200 trade and labor groups, the lawmakers said, including four Arizona-based agricultural organizations.

While some quibbled over the details of the bill, all agreed that farmers depend on immigrants to do the work Americans won’t, and need help hiring them. Arizona was the ninth-biggest user of H-2A workers in the country this spring, according to Labor Department data.

“For years, Arizona farmers and ranchers have shared with me the difficulty of finding labor and how the scarcity affects output and profit,” said Rep. Ann Kirkpatrick, D-Tucson, in a statement Thursday.

“Agriculture is such a vital economic driver in our state and it is crucial that we have the labor force to meet those needs,” she said.

The bill would broaden the H-2A program, which provides temporary visas to seasonal workers, by adding a five-year renewable visa as well as a limited number of new year-round visas. The latter is particularly important to producers like dairy farmers, who need help 12 months a year, which has been prevented them from hiring H-2A workers before.

Ashley Ellixson, vice president of legal and environmental affairs at United Dairymen of Arizona, said it can be difficult to find “skilled labor to do the hard work that it takes to work on a farm that is 365 days a year, 24 hours a day.”

The bill would limit the number of such visas to 60,000 for the first three years of the program, which Ellixson said would satisfy only a fraction of dairy farmers’ needs. Still, it’s “a good start,” she said, as “dairy currently has nothing to bring in an immigrant labor force.”

Another change under the bill would be to let laborers who have spent years as farmworkers in the U.S. get access to the green-card process, along with their spouses and children, as long as they have clean criminal records.

“In Arizona, these are skilled folk,” she said. “They have dedicated quite a bit of time and effort into helping us provide food and fiber.”

But Smallhouse balks at other proposals in the bill, including regulations that would set different wages by sector and job. She said the set rates are too expensive for farmers and ranchers to realistically pay.

“You would see a lot more ag production moving out of country, and that’s never a good thing,” Smallhouse said of the bill’s potential impact. “We need to have a sustainable agriculture industry, and we need to have that in Arizona.”

Smallhouse worries that the bill, as written, leaves farmers and ranchers vulnerable to lawsuits and labor disputes.

But Patrick Bray, the executive vice president of the Arizona Farm and Ranch Group, remains positive about the bill, particularly the fact that it would streamline the H2-A process for employers. He called that “a step in the right direction for farmers and ranchers” that lets them recruit electronically, and reduces the costs they pay for worker housing.

The bill also creates a mandatory E-Verify system that agricultural workers must enroll in and employers must use, which Bray said will help employers “figure out who is or isn’t legal.” In the current political climate, he said, he hopes seemingly small changes like these fix real problems.

“We have a really bright future in agriculture out here in Arizona,” Bray said. “We’re excited about the opportunities.”