Rep. Debbie Lesko, R-Peoria, joined other Republicans who criticized the plan for the House to proceed on an impeachment inquiry of President Donald Trump, a proposal she called a “sham.” (Photo by Kailey Broussard/Cronkite News) 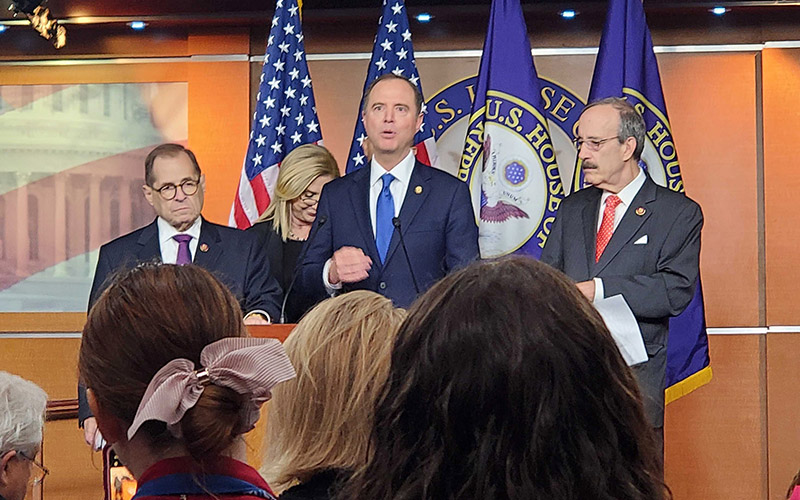 Chairs of the four House committees that will take the next steps in the impeachment probe, from left, Democratic Reps. Jerry Nadler, Carolyn Maloney, Adam Schiff and Eliot Engel. (Photo by Wissam Melhem/Cronkite News)

WASHINGTON – Arizona lawmakers split on party lines Thursday as the House passed a resolution that lays out the framework for the next public phase of the impeachment inquiry into President Donald Trump.

The 232-196 vote followed two hours of fiery debate, in which Republicans like Peoria Rep. Debbie Lesko called the resolution a “total sham” that violates basic standards of fairness by not giving Trump due process.

“It misleads the American public … the process set forth in this resolution is far from open and far from transparent,” Lesko said on the House floor. “In fact, it is the exact opposite.”

But Rep. Raul Grijalva, D-Tucson, said after the vote that the resolution “establishes the rules of the public hearings that will expose Trump’s cover-ups, corruption, and shake-downs.” He said Republicans will have to decide whether to “defend a corrupt president” or “defend the Constitution” they swore to uphold.

That partisan split mirrored the full House, which saw 231 Democrats and one independent vote for the measure and 194 Republicans and two Democrats oppose it. All four Republicans in Arizona’s delegation opposed the resolution, while all five Democrats backed it.

The vote comes a little more than a month after House Speaker Nancy Pelosi announced the start of an impeachment inquiry, in the wake of a White House whistleblower’s concerns about a Trump July 25 call to Ukraine President Volodymyr Zelensky. The whistleblower said Trump appeared to ask for political favor during that call in exchange for hundreds of millions in U.S. aid the Ukrainians were seeking.

In the weeks since Pelosi’s announcement, three House committees – Intelligence, Oversight and Foreign Affairs – have been meeting behind closed doors to investigate the allegations.

Republican lawmakers and the White House have complained loudly about secret proceedings and the fact that the House never voted to tell the committees to proceed.

The House did just that Thursday, directing those three committees to continue their investigations and adding the Judiciary Committee, where Trump will be allowed to have attorneys to present evidence in his defense.

The resolution says House Intelligence Committee Chairman Adam Schiff, D-Calif., and the ranking committee member, Rep. Devin Nunes, R-Calif., would jointly lead any public hearings. Republicans could request their own witnesses – but those witnesses would have to be approved by the majority.

Schiff would have the right to either release or withhold any transcript from the closed-door hearings, a section attacked by Republicans like Rep. Andy Biggs of Gilbert. He also noted that, despite Thursday’s vote, Democrats already have scheduled another week of closed-door hearings.

“If this is about transparency, then open it up if you want the American people to see it,” Biggs said. “Give members access to the transcript, let the media into the room. Let us participate. Failing to do so denies transparency.”

The resolution’s author disagreed, saying the proposed rules are more than fair to Trump.

In a statement after the vote, the White House said Trump “has done nothing wrong and the Democrats know it,” but are wasting time on an impeachment instead of focusing on pressing issues such as lowering prescription drug costs and securing the southern border.

“The Democrats want to render a verdict without giving the administration a chance to mount a defense,” said the statement from White House press secretary Stephanie Grisham. “That is unfair, unconstitutional, and fundamentally un-American.”

Pelosi said on the House floor that impeachment is something lawmakers have to do – not something they want to do.

“I doubt anybody in this place or anybody that you know comes to Congress … to impeach the president of the United States, unless his actions are jeopardizing our honoring of our oath to office,” she said.

The oath of office was not on the mind of Rep. Steve Scalise, R-La., who displayed a large poster on the House floor that compared the committees’ inquiries so far to “37 days of Soviet-style impeachment proceedings.”

“Maybe in the Soviet Union you can do things like this, where only you make the rules. Where you reject the ability for the person you’re accusing to even be in the room,” Scalise said in a passionate speech.

But Rep. Tom O’Halleran, D-Sedona, said the resolution will allow the White House to participate as hearings go forward and will allow both Republicans and Democrats to call witnesses.

“I have always been an advocate for expanding transparency in all levels of our government,” O’Halleran said in a statement after the vote. “I voted in favor of this resolution to ensure that this inquiry remains open and accessible to the American people and allows them to form their own judgments based on fact.”