Rep. Andy Biggs, R-Gilbert, the chairman of the conservative Freedom Caucus and one of about 30 House Republicans who stormed a secure hearing room where an impeachment inquiry was being held. Critics said the move have breached the ongoing security of the space. (Photo by Wissam Melhem/Cronkite News) 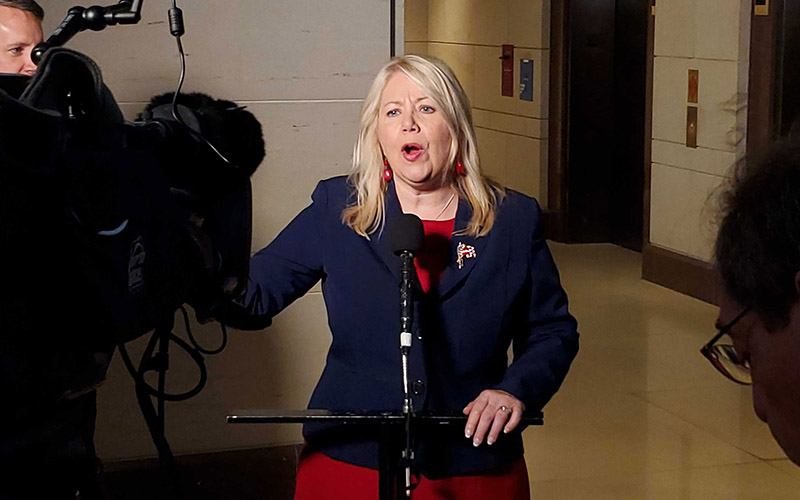 Rep. Debbie Lesko, R-Peoria, after leaving the secure hearing room, said she is outraged the impeachment inquiry is going on behind closed doors. But experts say there is nothing wrong with closed-door proceedings at this point of the probe. (Photo by Wissam Melhem/Cronkite News)

WASHINGTON – Arizona lawmakers were among dozens of Republicans who stormed the House impeachment hearings Wednesday to protest the closed-door meetings and demand that Democrats open the proceedings.

The action brought an abrupt halt to the deposition of Deputy Assistant Defense Secretary Laura Cooper, who was about to testify in the House’s inquiry into a phone call in which critics say President Donald Trump withheld aid from Ukraine in exchange for a political favor.

“You should be outraged if you’re an American at what’s happening here. You should be allowed to confront your accusers,” said Rep. Andy Biggs, R-Gilbert, one of about 30 Republicans who barged in to the secure House Intelligence Committee room where committees have been meeting for the impeachment inquiry.

“This is being held behind closed doors for a reason – because they don’t want you to see what the witnesses are like,” Biggs said.

But Democrats said the hearings are behind closed doors because they do not want witnesses to coordinate their testimony and to protect them from being intimidated by an administration that has refused to cooperate.

And they said Republicans committed a security breach by using their cell phones to transmit their takeover of the secure hearing room where confidential information is shared.

“They not only brought in their unauthorized bodies, they might have brought in the Russian and Chinese with electronics into a secured place,” said Rep. Eric Swalwell, D-Calif.

Swalwell accused the Republicans of trying to intimidate witnesses after “damaging” testimony Tuesday by Bill Taylor, the acting U.S. ambassador to Ukraine, who has expressed strong misgivings about Trump’s July 25 call with Ukrainian President Volodymyr Zelensky.

“House Republicans led by their Whip Mr. (Steve) Scalise, authorized by the Majority Leader Kevin McCarthy, stormed through a secured facility to obstruct and partially at least right now to delay the proceedings,” Swalwell said. “This is an effort to intimidate witnesses who seek to come forward.”

The action comes just one month after House Speaker Nancy Pelosi announced that the House committees on Intelligence, Oversight and Foreign Affairs would begin an impeachment inquiry after a White House whistleblower raised concerns about Trump’s call to Zelensky.

Zelensky, who was elected at the time, was seeking U.S. military aid to help deter Russian incursions into his country. But Trump asked for “a favor,” urging the Ukrainians to investigate business dealings of the son of former Vice President Joe Biden, a possible Trump challenger in 2020.

The committees have held several weeks of closed-door hearings and depositions, meetings that Republicans say deny Trump his due-process right to defend himself.˜It came to a head Wednesday morning when GOP House members, led by Rep. Matt Gaetz, R-Fla., demanded that the meetings be made public.

After a news conference outside the secure hearing room, lawmakers stormed the chamber through three separate entrances. Lawmakers said that brought an immediate end to the hearing, as Cooper was ushered out.

In what became a four-hour standoff, GOP members remained in the room, at one point ordering pizza, soda and snacks for lunch as they waited, according to press reports. Several members posted tweets that appeared to come from inside the secure room, but they later insisted that it was their staff making the tweets from outside the chamber.

Rep. Debbie Lesko, R-Peoria, who left the room soon after entering with the others, said she is outraged that not all House members are allowed to know what’s happening behind closed doors on the probe.

“Nancy Pelosi needs to have a fair process, a vote on the floor to actually authorize this impeachment inquiry with a standard set of rules and due process that every citizen should get, yet alone the president of the United States,” Lesko said.

But Katrina Mulligan, managing director for national security and international policy at the Center for American Progress, said there is no rules in the Constitution on how to handle an impeachment inquiry.

“They don’t have to hold a floor vote in order to proceed with the inquiry and there’s nothing in the Constitution that requires them to handle it any differently from how they currently are,” she said.

“The Republicans are kind of appealing that the president is being treated unfairly but in reality he isn’t,” she said. “There is no such thing as what this is supposed to look like.”

Elliot Mincberg, a senior fellow and counsel at People for the American Way, called Wednesday’s actions a “diversionary tactic.”

“As a former House staffer, it is particularly disturbing to me that just for the sake of making political points and diversions that these Republicans … are willing to violate clear established bipartisan procedures that are there to protect our national security,” said Mincberg, former chief counsel for oversight and investigations for the Judiciary Committee.

Rep. Raul Grijalva, D-Tucson, said in a statement that the GOP action is a “historical embarrassment” when those lawmakers are “silent on the president’s crimes.” Rep. Tom Malinowski, D-N.J., said it was nothing more than members of the hard-right Freedom Caucus storming “a castle that they already occupied.”

“It’s a bunch of Freedom Caucus members having pizza around a conference table pretending to be brave,” Malinowski said.