Army veteran Hector Barajas-Varela told lawmakers about the years he spent in Tijuana, Mexico, after his second deportation in 2010. While there, he set up the Deported Veterans Support House to help other vets like him. (Photo by Megan U. Boyanton/Cronkite News) 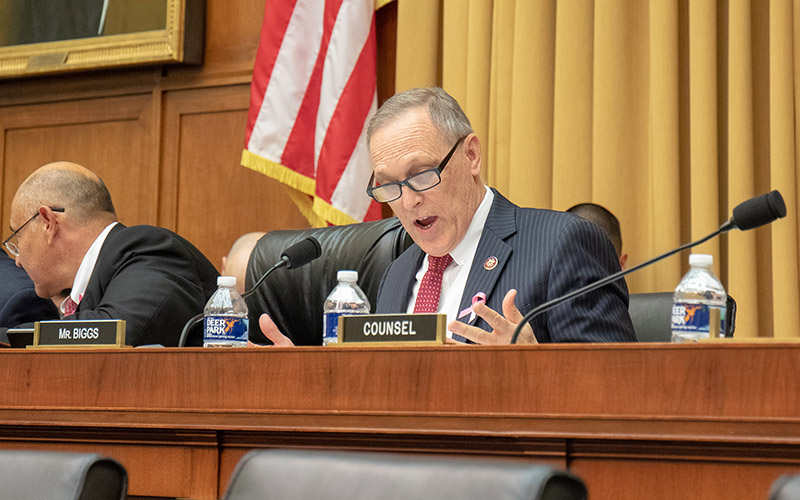 Rep. Andy Biggs, R-Gilbert, said the U.S. needs to support its veterans, but when they commit crimes they should face consequences like anyone else, including deportation when appropriate. (Photo by Megan U. Boyanton/Cronkite News)

WASHINGTON – Hector Barajas-Varela is an Army veteran, proud to have served the United States as a paratrooper in the 82nd Airborne Division – even after the country deported him twice.

A lawful permanent resident who was raised in Compton, California, and enlisted at age 17, Barajas-Varela occasionally choked back tears as he testified about committing a crime after his honorable discharge – a crime that got him deported and separated from his daughter and her mother.

“Under today’s laws, most deported veterans only come home to America with an American flag draped around their casket,” he said Tuesday. “There is no honor in bringing deported veterans home to be recognized or thanked for their service only when they die.”

He was one of four witnesses at a House Judiciary subcommittee hearing on the impact of immigration policies on service members and veterans.

Barajas-Varela is not alone. The Government Accountability Office reported in June that more than 44,000 noncitizens joined the U.S. military from 2013 to 2018, and that 250 veterans faced deportation during the same period.

Rep. Andy Biggs, R-Gilbert, said during Tuesday’s hearing he understands the struggle service members face readjusting to civilian life, pointing to his introduction of a bill in September to make hyperbaric oxygen therapy more accessible to veterans. But he also noted that 18 of the 87 cases reviewed in the GAO report involved the sexual abuse of minors, and another 21 of those vets were accused of homicide or assault.

He said deportation is simply reality for noncitizens who break the law – veterans or not.

But double punishment is exactly what Barajas-Varela said he endured, after serving his time for a criminal conviction and then being deported.

Barajas-Varela was honorably discharged in 2001 after six years of service and multiple awards. But acclimating to civilian life was a battle, and he wound up behind bars a year later after shooting at a vehicle. He was deported to Mexico as soon as his sentence was up.

“Being a veteran does not mean that you get a free pass and never have to pay the consequences for your actions,” Barajas-Varela told lawmakers. “At the same time, it does not make sense to me to deport our veterans after they have completed their sentence.”

He returned to the U.S. illegally, living as a father and working as a roofer until a traffic incident led to his second deportation.

This time, he focused on pursuing the proper channels to American citizenship. With the assistance of the Veterans Affairs office in San Diego, he established the Deported Veterans Support House in Tijuana, Mexico, to help other vets in similar positions.

He now does that work on the U.S. side of the border, after getting a pardon in 2018 from then-Gov. Jerry Brown of California, which opened the door to citizenship.

Tuesday’s hearing came one day after Rep. Raul Grijalva, D-Tucson, co-sponsored a bill aimed at cases such as Barajas-Varela’s.

The Veteran Deportation Prevention and Reform Act of 2019 would require the Homeland Security Department to create a Military Family Immigration Advisory Committee that would recommend whether targeted veterans should be deported. It would also establish a pathway to citizenship for military spouses and children.

“Anyone who wore the uniform of our armed forces and served time for any wrongdoing deserves a place in our country instead of facing the horrors and trauma of deportation and separation from the ones they love,” Grijalva said in a statement.

Barajas-Varela said deportation of veterans is more than enough punishment.

“I couldn’t come back to see my family,” he said after the hearing. “To me, that’s a punishment where I’m not able to be with my daughter and provide the help, financial support to her mother.

“It’s been a very difficult separation from her and from my daughter.”