By Daniel Gatalica/Cronkite News and /

PHOENIX – A new nonprofit, 100 Angels Foundation, provides medical supplies and health care to those arriving from Mexico, Guatemala, El Salvador, Honduras – even Russia. Medical professionals volunteer their services and provide medicine and treatment for immigrants who get sick or injured during their arduous journeys to the U.S. border.

Cecilia García, founder and president of 100 Angels, said families often have been traveling for weeks at a time, followed by days in detention centers after surrendering to immigration officials at U.S. ports of entry.

“By the time we received them, they were in very precarious positions,” García said, listing dehydration, stomach illnesses and skin-related hygiene issues as frequent problems. Headache, body pain, flu, and cough also are common.

One Guatemalan family who made a harrowing trip into the U.S. to seek asylum were bused to a Phoenix area church, where 100 Angels volunteers helped them.

A mother, father and their child huddled on a couch in the church where they said they finally felt safe. They said they walked across the U.S. border from Mexico.

“A man wearing black followed us across train tracks, and told us to stop, and that he was going to shoot us,” the father said in Spanish, sitting beside his young son.

Tears flowed as the parents recalled being robbed at gunpoint during their journey from Guatemala through Mexico. 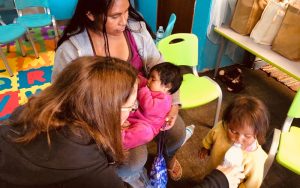 A volunteer from 100 Angels helps migrants who recently crossed the border and are waiting for status hearings. The nonprofit foundation helps them with free medical supplies and medical care. (Photo courtesy of 100 Angels)

“Immigration didn’t want to believe us,” he added.

The family members are among the migrants who receive help from 100 Angels. As undocumented migrants, they turned themselves over to U.S. immigration authorities and asked for asylum. They joined other migrants on a bus late last month that took them to Monte Vista Baptist Church, one of several Arizona churches that give temporary sanctuary to migrants.

The family is seeking asylum because of poor health care in Guatemala.

“Many hospitals didn’t have doctors or medicine,” the father said. Cronkite News is not using the family’s name because their migration status is still pending.

About 11.6 million immigrants from Mexico lived in the United States in 2017, and fewer than half were in the country without documents, according to Pew Research Center estimates.

García opened the doors to the foundation in December. The name reflects her dream of having “100 angels” to help people, especially children, through their struggles.

“I would like each child to have at his side One Hundred Angels that protect him, that accompany him, that guide him, that love him,” García says on her website.

She conceived the idea for 100 Angels after serving as an interpreter in a humanitarian medical mission in Berlin, El Salvador, according to the foundation’s website. She watched as American volunteers provided medical aid to more than 1,600 people in just six days. The experience inspired her.

Angélica Ortiz, a volunteer for 100 Angels, said the foundation wants to expand.

“I picture us in many places helping people, not only asylum seekers but also people who don’t have money for basic medicines and who we can help,” she said.

“I see it around the world.”