Protesters at the March for Trump gather to listen to speakers on the West Lawn of the Capitol Thursday. (Photo by Megan U. Boyanton/Cronkite News) 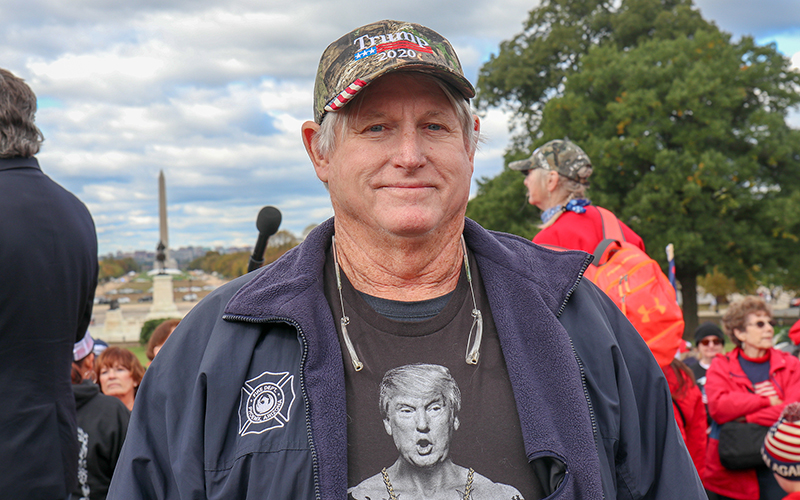 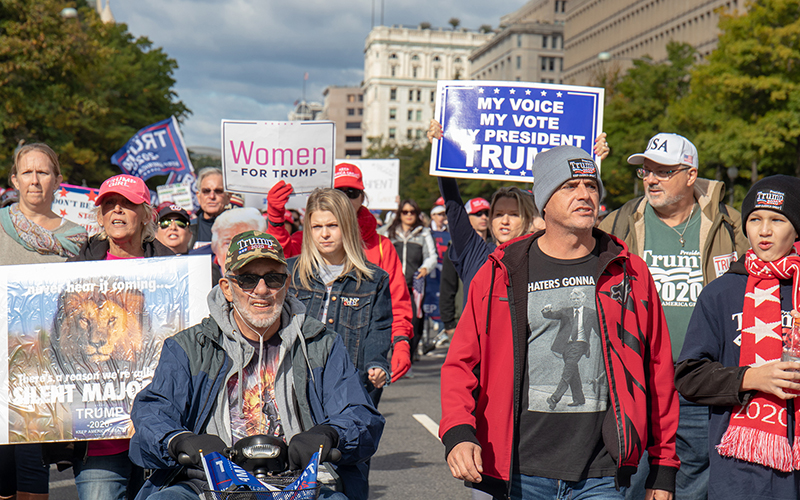 The March for Trump rally heads down Pennsylvania Avenue on its way to protest outside the Capitol on Thursday. (Photo by Megan U. Boyanton/Cronkite News) 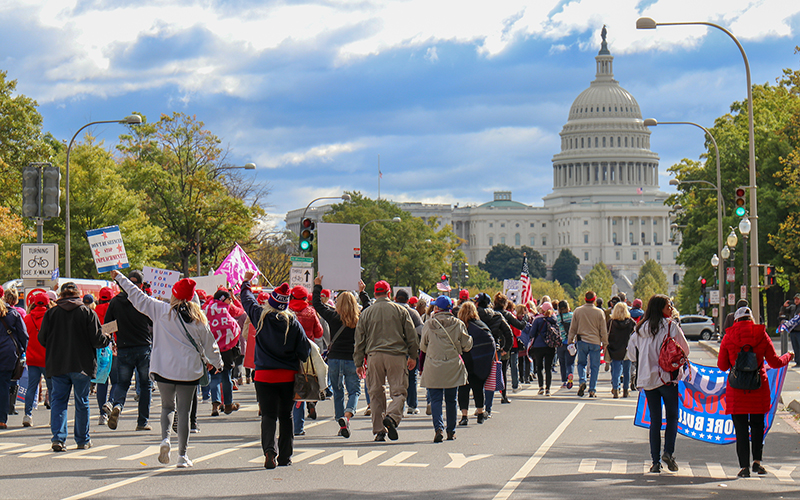 Several hundred protestors took part in Thursday’s rally to support the president in the face of an impeachment inquiry. (Photo by Megan U. Boyanton/Cronkite News) 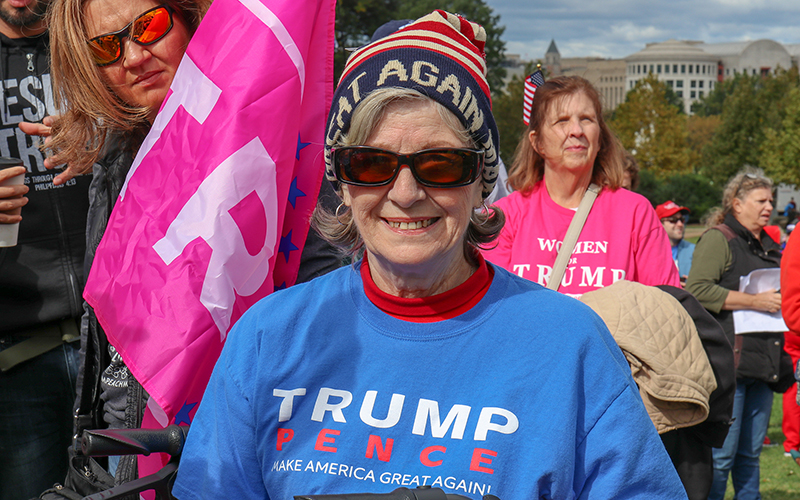 Gila Bend resident Diane Van Zwieten delayed her trip home from a summer in Ohio, in order to attend the March for Trump in Washington. (Photo by Megan U. Boyanton/Cronkite News) 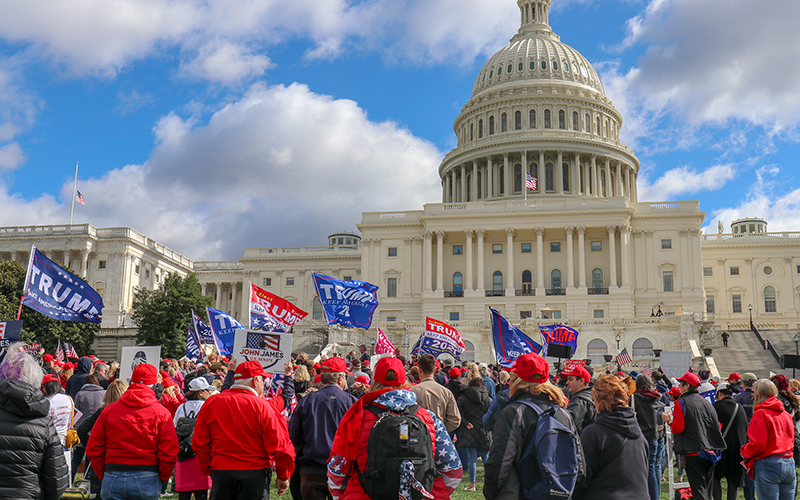 While protesters rallied outside the Capitol, lawmakers continued interviewing people inside in their impeachment inquiry. (Photo by Megan U. Boyanton/Cronkite News)

“It’s a joke,” said Lambert, one of several hundred who rallied on the West Lawn of the Capitol to voice their support for the current administration – and disdain for Congress.

With chants like “Pelosi’s got to go” and “Four more years,” protesters at the March for Trump event waved signs and “Trump 2020” flags as they marched down Pennsylvania Avenue to Capitol Hill. There, they called on a higher authority before calling on lawmakers.

“Take us and use us and spread us,” said Larry Morey, a Georgia-based real estate developer who led the invocation. “Make America great again.”

He left the podium with tears in his eyes. After reciting the Pledge of Allegiance and hearing from a series of speakers, the crowd was scheduled to take their fight directly to the offices of Democratic lawmakers leading the impeachment inquiry.

But inside the Capitol, House members were holding another day of impeachment hearings behind closed doors.

The hearings began earlier this month, after House Speaker Nancy Pelosi announced the official start of an impeachment inquiry into charges that Trump asked a foreign government to interfere in U.S. elections.

That followed a White House whistleblower’s report that Trump asked for “a favor” from new Ukrainian President Volodymyr Zelensky, who was seeking U.S. aid to push back against Russian incursions in his country. Trump wanted Zelensky to investigate the business dealings of Hunter Biden – the son of former Vice President Joe Biden, a possible Trump challenger in 2020.

Trump has insisted that there was no quid pro quo in what he calls the “perfect” July 25 call with Zelensky.

In a White House briefing for reporters Thursday, acting Chief of Staff Mick Mulvaney repeated the administration’s assertion that there was no quid pro quo in the Ukrainian call. He said leveraging aid is something the government does “all the time with foreign policy,” and that career bureaucrats and other critics need to “get over it.”

“Elections do have consequences and they should,” Mulvaney said, according to a White House transcript. “And your foreign policy is going to change. Obama did it one way; we’re doing it a different way. And there’s no problem with that.”

But Democrats in the House and Senate have said Trump’s actions – coming on the heels of two years of federal investigations into possible interference by Russia in the 2016 election – are an abuse of power. By soliciting the help of another country on a political matter, Pelosi said Trump threatened national security and the American electoral process.

A majority of Americans seem to agree, with a Pew Research Center poll showing the decision to investigate the president is now backed by 54% of the public.

None of those people were at the Thursday rally organized by the political action committee, Women for America First.

When Gila Bend resident Diane Van Zwieten learned of the event, she postponed her return home to Arizona after a summer in Ohio to attend the rally. She said the March for Trump is a call to keep the president in office – and protect future generations in the process.

“There might be things you don’t like about Trump,” Van Zweiten said. “But he’s doing a darn good job of leading our country in the right direction. And you have to think about your family, your children, grandchildren.”

Without the president’s leadership, she fears the United States is fated to trash the Constitution and adopt communism.

“Not all leftists are against our country, but many have gone with the global philosophy of the New World Order,” Van Zweiten said. “We don’t want that. That’s taking our freedom away.”

Lambert said he came to support Trump even more after he became what he calls a “victim of the Obamacare situation.”

“I retired from the Phoenix Fire Department. I moved to Florida, bought my dream house,” Lambert said Thursday. “I got to live there two years before Obamacare rates got so high that I couldn’t afford health insurance anymore.”

To Lambert, it’s not Trump who is in need of replacement, but the lawmakers on Capitol Hill.

“Nobody’s doing anything but fighting with President Trump,” he said. “They’re not getting anything done that they’re supposed to.”