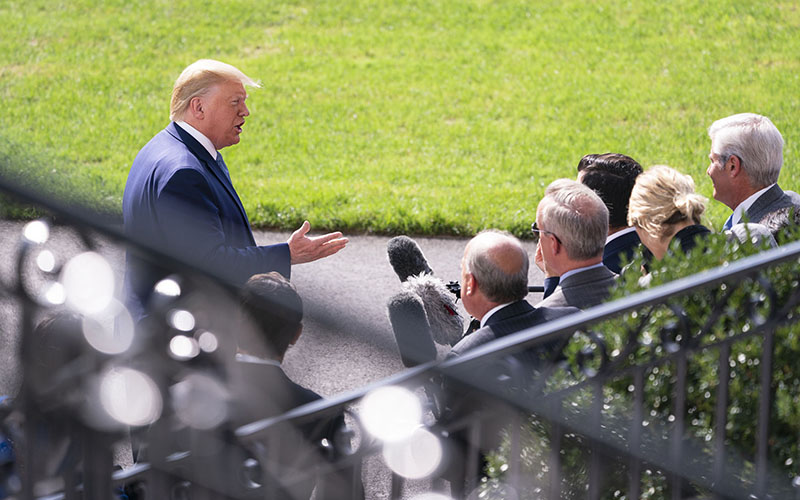 President Donald Trump announced Sunday that he was withdrawing U.S. troops from northern Syria because the fight against the ISIS caliphate had been won. But critics fear the move will endanger Kurds in the area, who are U.S. allies, and revive ISIS. (Photo by Joyce N. Boghosian/White House)

Sen. Martha McSally is one of several Republicans – including Majority Leader Mitch McConnell – who this week called the move short-sighted, saying it will allow a return of the Islamic State that could threaten the U.S.

They also said the move leaves a key U.S. ally, the Kurds, vulnerable to attacks from Turkish forces – attacks the Turks launched Wednesday.

Of the other Arizona lawmakers who have weighed in, the reaction is more predictably partisan, with Democratic Sen. Kyrsten Sinema and three House Democrats opposing, while two House Republicans backed the withdrawal.

Trump’s sudden decision Sunday to pull U.S. troops followed a phone call with Turkish President Recep Tayyip Erdoğan, who said Turkey would “soon be moving forward with its long-planned operation into Northern Syria,” according to the White House. Erdoğan has called the Kurds, an ethnic minority in the region, “terrorists.”

Trump said U.S. troops had helped defeat the Islamic State group and that they would “no longer be in the immediate area.” By Tuesday, the Pentagon was saying that U.S. troops had been moved “out of the path of potential Turkish incursion to ensure their safety.”

But lawmakers were already pushing back by Monday.

“Abandoning our partners in the war on the Islamic State will only jeopardize America’s security, strengthen Iran and Russia, and put our allies at greater risk,” Sinema said in a statement Monday.

On Tuesday, McSally said in an interview on Fox News that “Turkey needs to be deterred” and the U.S. needs to “stand with the Kurds.”

“I support the president’s objective,” McSally said, before adding “we cannot tolerate a NATO ally now coming in and mowing them (Kurdish forces) down. That is just not the right message, and it’s not good for the safety of America.”

Trump pushed back on Twitter, where he said he was “trying to end the ENDLESS WARS,” and where he laid out three options for dealing with Turkey.

“Send in thousands of troops and win militarily, hit Turkey very hard financially and with sanctions, or mediate a deal between Turkey and the Kurds,” Trump tweeted.

In remarks to reporters Thursday, Trump said his preference would be the third option.

“I hope we can mediate,” Trump said. “Turkey knows where I stand … we won.”

But the Senate is already eyeing sanctions against Turkey and Turkish officials, including Erdoğan. A proposal drafted by Sen. Chris Van Hollen, D-Md., and Sen. Lindsey Graham, R-S.C., would also impose restrictions on military and energy supplies to Turkey, among other measures.

Graham, normally a steadfast support of the president, called the troop withdrawal a “disaster in the making.”

Besides McSally and Sinema, five of Arizona’s nine House members have commented on the troop withdrawal.

Speaking Tuesday on the Chad Benson Show, Biggs said the Syrian Kurds are “effectively paid mercenaries,” and argued the withdrawal should be part of a larger debate over Congress’ power to declare war.

But Democratic Reps. Raul Grijalva of Tucson and Greg Stanton and Ruben Gallego, both of Phoenix, came out against the president, with Gallego using his personal Twitter account to say it was Trump’s “incompetence and sheer dumbness” that endangered the Kurds.

“@RepJasonCrow and I served. We know how dangerous it is for Trump to abandon our allies,” said Gallego, a Marine veteran of Iraq. “We’re asking him now – what’s your plan?”

McSally said she hopes some solution can be reached, but not at the expense of the Kurds – and, ultimately, the U.S.

“They’re the ones that defeated the (Islamic) caliphate,” she said Tuesday. “If we turn a blind eye, they will just come back and attack America.”