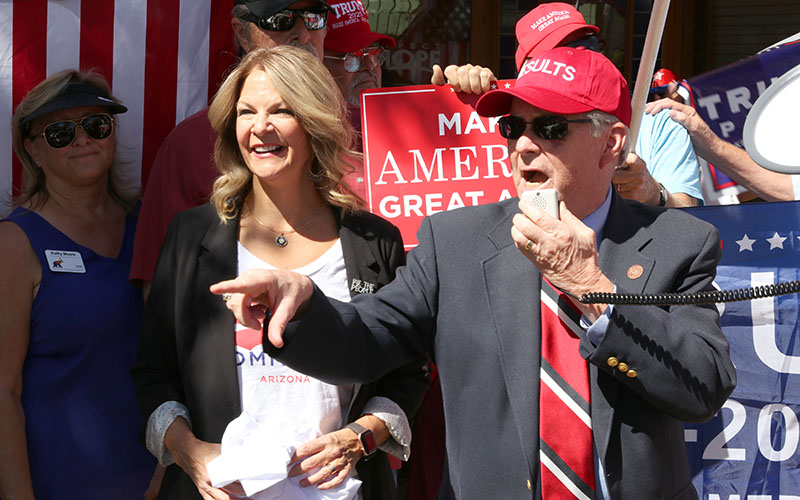 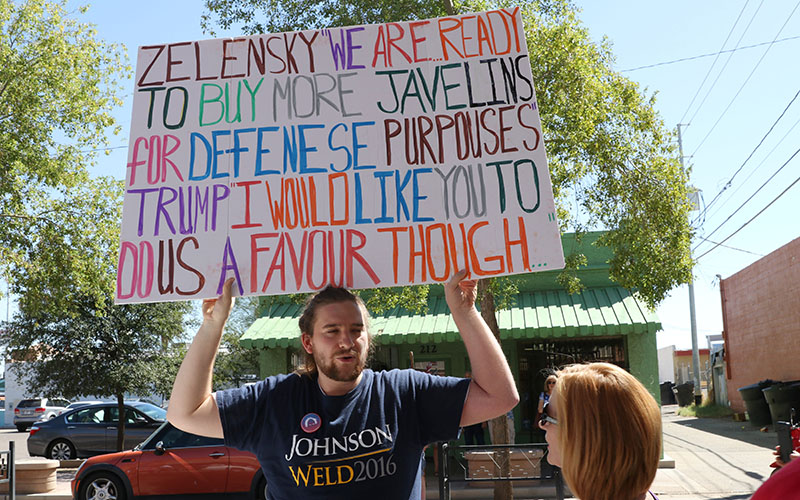 Although Christopher Carlson and Lesa Antone disagreed about the impeachment inquiry into President Donald Trump, they both agreed on the importance of voting and that blackface is never appropriate. (Photo by Annika Tomlin/Cronkite News) 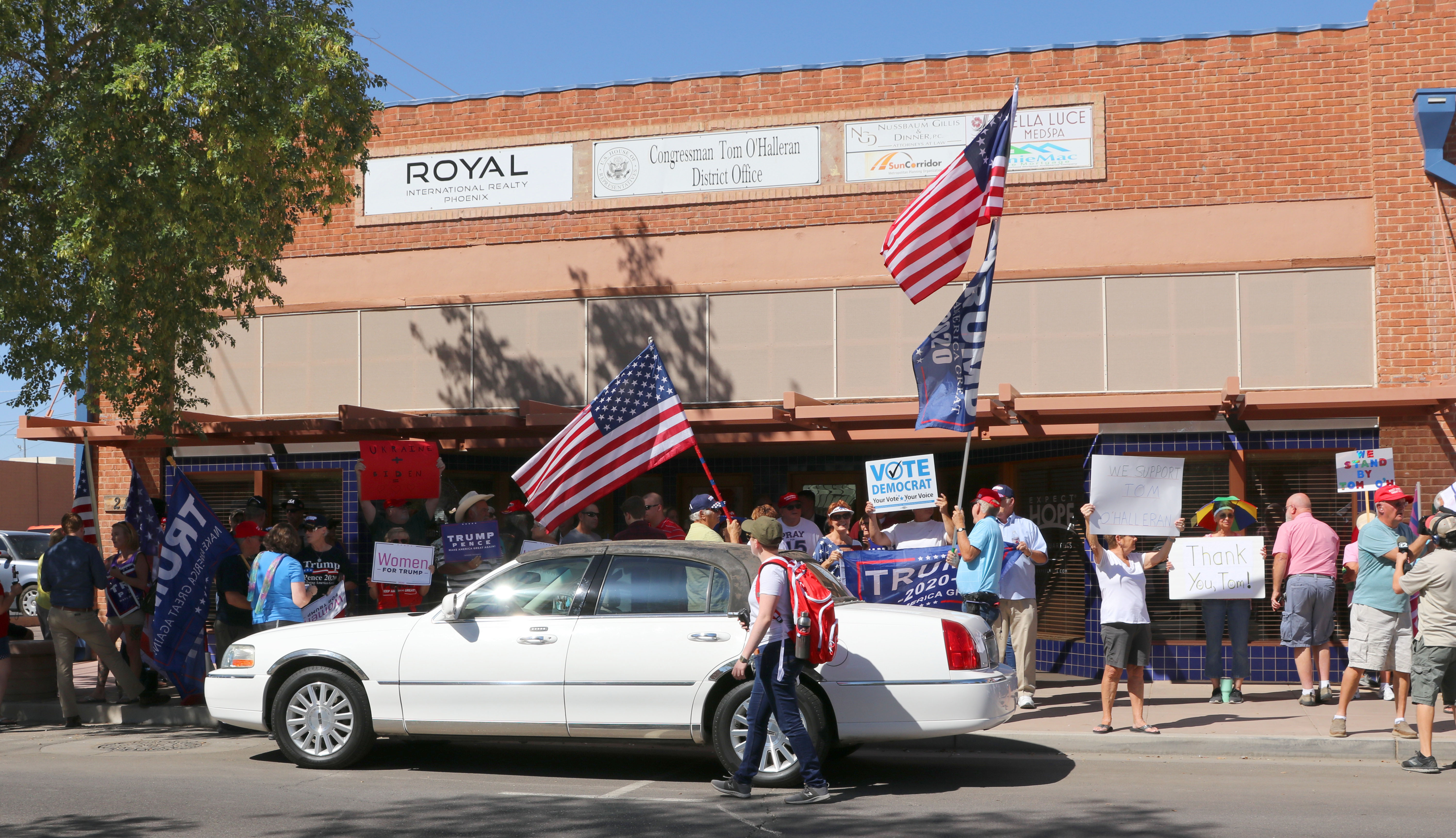 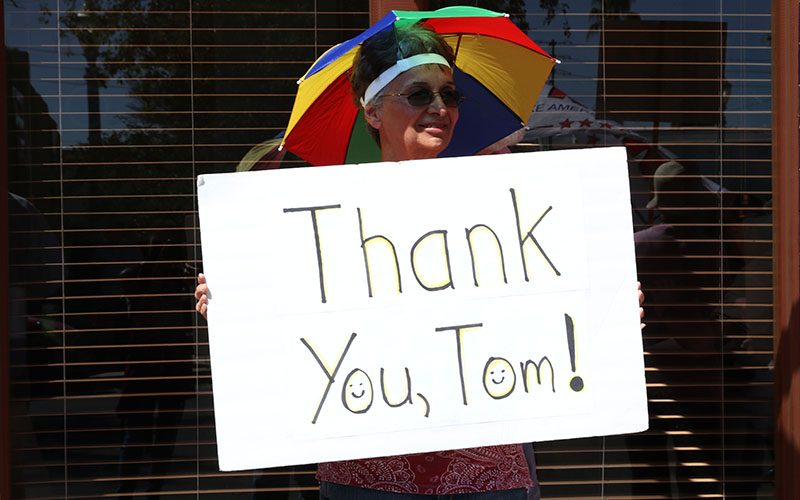 CASA GRANDE – Arizona Republicans opposed to an impeachment inquiry into President Trump on Tuesday joined a nationwide protest of Democratic members of Congress, saying it was time to “stop the madness.”

“We want them to stop the insanity, we want our state to focus on governing,” said Trump supporter Glenda Bird, who was among 30 to 40 people carrying signs and shouting slogans in front of the office of U.S. Rep. Tom O’Halleran, D-Casa Grande. He supports the House impeachment inquiry into Trump’s dealings with Ukraine, which have been the subject of a whistleblower’s complaint and several congressional hearings.

“Stop the madness that we’ve seen from the Democrat party again and again,” said Kelli Ward, who chairs the state GOP. “Ever since November 2016, they’ve gone crazy. They expected (special counsel Robert) Mueller to deal a deathblow to the president, and now they are at their wits’ end.”

The crowd cheered. The rallies around the country targeted members of Congress who represent swing districts, including Rep. Ann Kirkpatrick, D-Tucson.

Not everyone in the crowd supported Trump; a handful of people showed up to applaud O’Halleran’s stand.

The rallies came the same day as the standoff between Republicans and Democrats in Washington ratcheted up the standoff. Trump vowed not to cooperate with the inquiry in a letter to Democrats and blocked Gordon Sondland, the U.S. ambassador to the European Union, from speaking to investigators. House Speaker Nancy Pelosi called it an “abuse of power,” according to the New York Times.

“As a former homicide investigator, I know that hard facts and evidence matter,” O’Halleran said in a statement last month. Congress needs to look into the facts to determine whether impeachment is called for while still paying attention to other issues affecting Americans, he added.

Ward said whistleblowers in the impeachment inquiry should be called “leakers” and reiterated her support for Trump’s “desire to expose corruption around the world,” in reference to his suggestion that China should investigate Joe and Hunter Biden’s ties to Ukraine. According to news reports, the Bidens have done nothing illegal. 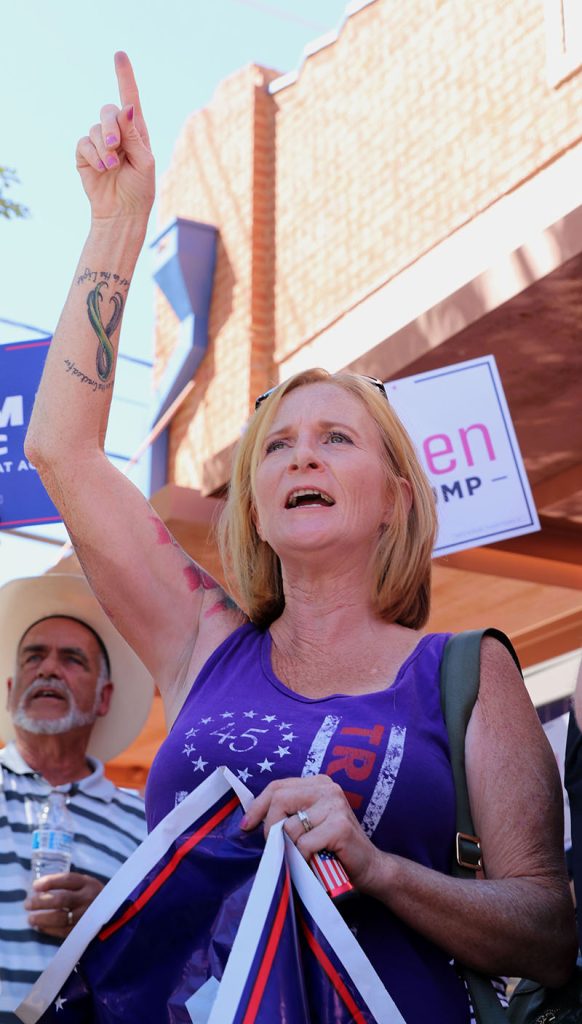 “It’s the best economy we’ve had in years, the lowest unemployment rate in years,” he said. “Every hour, every minute, there are sex traffickers, there are drugs and there are wicked people crossing the border who want to harm us.”

Leach criticized Congress and representatives like O’Halleran for not taking action on issues Trump wants to tackle.

“Where was Congress? Trump built the wall, he found the money,” Leach said. “Where is O’Halleran? Nowhere to be found.”

An impeachment vote in the Democrat-controlled House of Representatives would not remove a president from office; that requires two-thirds of the 100 senators to vote for conviction. Republicans hold a 51-47 majority in the Senate, with two independent senators who caucus with Democrats.

A few Democratic protesters made their voices heard at the rally.

Deborah Burdett applauded O’Halleran for “seeing past alt-facts” and implored Trump to be more transparent.

“For too long we’ve been living in a world of alt-facts. To Tom, I would say ‘Bravo’ for studying the facts,” Burdett said. “I want to ask Trump, ‘Where’s his conscience?’ I would ask him to speak honestly.”

Ralph Atchue, treasurer of the Democrats of Casa Grande, described O’Halleran, who represents Arizona Congressional District 1, as a “moderate who’s willing to work across the aisle.”

“You don’t get elected in Casa Grande by being a radical leftist; this is a conservative area,” Atchue said.

“We are a border state, and politicians like him should understand how important that is. When I’ve been asking these Democrat protesters around here, they can’t come with anything to defend O’Halleran,” Davis said.

“I’ve heard this said before, ‘Some of these people hate Trump more than they love America.’ ”