More than half of Americans 65 or older have a chronic condition, such as diabetes, cancer or Alzheimer’s disease. Many have multiple conditions, which can make a trip to the emergency room a struggle for both patient and provider.

But Banner University Medical Center in Phoenix and a handful of other hospitals are changing the way geriatric emergencies are handled.

PHOENIX – It’s a quiet Monday morning when a nurse at Banner medical center gets a call from incoming paramedics: “We’re coming in with a 65-year-old male. He’s in a memory care area of a retirement home …”

Calls like that aren’t unusual at Banner, where caregivers see more than 1,000 patients a month who are 65 or older.

Nationally, emergency departments are treating seniors at higher rates than nonseniors, according to the American College of Emergency Physicians. But what makes Banner different is that it’s the only accredited geriatric emergency department, or ED, in Arizona.

“We know that older adults when they come into the ED, they have more complications,” said Dr. Nimit Agarwal, chief of geriatrics at Banner. “And there was a need for improving the care of these patients when they come to the emergency department.”

Agarwal and his colleagues started the accreditation process with the Geriatric Emergency Department Accreditation Program, run by the American College of Emergency Physicians, last November. 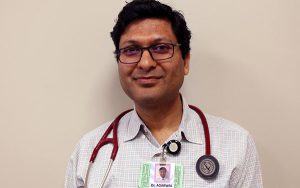 “We had to show that we were doing some initiatives,” he said. “One of our biggest initiatives in the emergency department is fall prevention in older adults.”

But tackling something like falls – which are the leading cause of injury-related deaths among older adults, according to the Centers for Disease Control and Prevention – means taking an interdisciplinary approach.

“We have nurses who are specially trained for detection of falls. We have a pharmacist who looks at their medications,” he said, because polypharmacy is a problem in older adults. “We have the physicians who get training every month on what geriatrics focused care could be.”

So this probably sounds like what should be happening in every emergency department, but geriatricians are in short supply.

“We have about 3,000 practicing geriatricians in the country,” Agarwal said.

And that’s not enough. In Arizona, the shortage is already being felt. The Arizona Geriatrics Society says the state should have more than 500 geriatricians. But as of 2016, there were only 117. And the need is only going to grow as baby boomers age.

Julie Cobos is the nursing director for emergency department observation and trauma at Banner. She takes me on a tour of the geriatric emergency department. There’s not a separate ward for older patients, although that’s the goal, but there are six “age-friendly rooms.” She points to a room with the sign on the sliding glass door, where a 68-year-old is being treated.

“If there’s any needs that may need to be met, we’re here to attend to them,” Cobos said.

Like providing extra pillows and blankets. Non-slip socks. Making sure their belongings are nearby so patients don’t scooch out bed. They also have easy access to food and drink. 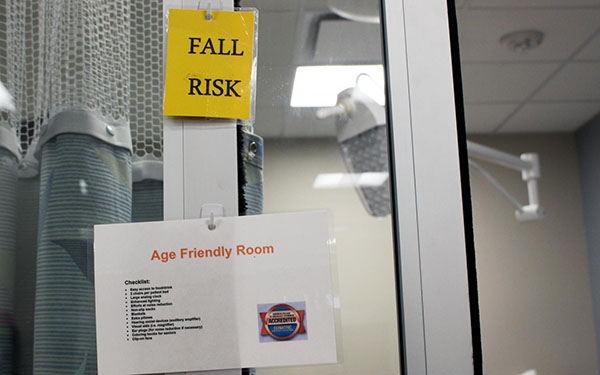 Banner University Medical Center hopes to have a designated ward for older emergency patients in the future, but for now, it makes do with six “age-friendly” rooms. (Photo by Justin Stabley/KJZZ)

But I ask Cobos: Can’t anyone who is in the emergency department get an extra pillow or chair?

“Yes, you can get pillows, non-slip socks, blankets all day long in every emergency department.”

What’s different at Banner is the level of care, the details. For example, what if a patient forgets his or her hearing aids?

“We have hearing devices,” Cobos said. “These things are fabulous. I’ve already had great feedback from our age-friendly community where this has assisted them in hearing what’s being explained to them, tests that are being done, discharge instructions that are given, that type of thing. We have magnifiers in there if they’re having problems seeing they forgot their glasses or what have you. Earplugs in case it gets too loud or noisy because it can get really crazy in here.”

All of that is music to the ears of Phoenix Fire Capt. Benjamin Santillan, a nationally certified dementia trainer. He said first responders are increasingly answering calls involving Alzheimer’s patients, so Phoenix Fire is training its personnel to care for this population. But what happens when they arrive at the emergency department?

“And that can cause them to get more confused, more combative, and more restless,” Agarwal said.

It also helps to have staff members trained in certain techniques like TADA.

“It’s a mnemonic that stands for tolerate, anticipate, do not agitate,” Argarwal said. “So we train our nurses to follow the technique to calm the person down so that we don’t have to use medicine or any physical restraint.”

Something else they do: hire nurses who have experience at assisted living facilities. Earlier, Cobos told me a story about one of her nurses and a 78-year-old patient with Alzheimer’s.

“Bless her heart. She was very scared. She was very confused, doing a lot of yelling in the room. The nurses kept trying to comfort her, so my charge nurse did a really cool thing.”

“This little lady kept wandering everywhere,” Cano recalled, “and she was pretty quick on her feet. We thought she was going to escape, so I had her sit by me as she ate lunch and …”

And the patient settled down. That small gesture changed everything, and sometimes, all it takes is a human connection.

About 100 hospitals across the country have an accredited geriatric emergency department, but with an estimated 10,000 baby boomers turning 65 each day, the numbers just don’t add up yet.