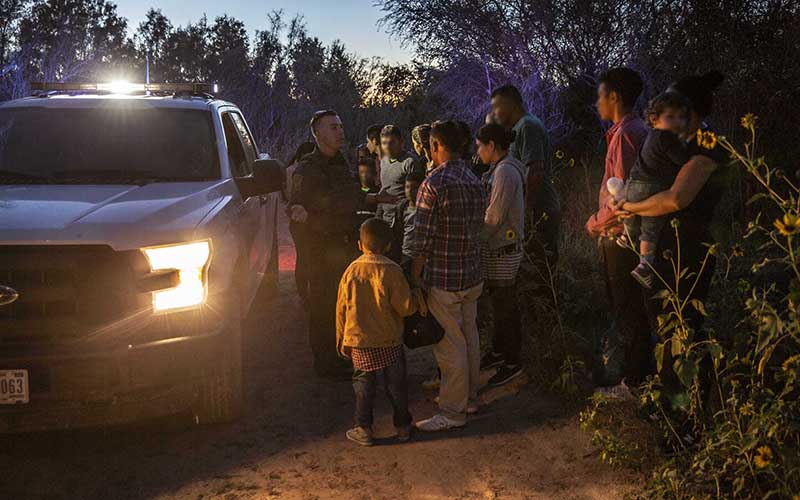 Immigrants turn themselves in to a Border Patrol agent after crossing the Rio Grande near Los Ebanos, Texas, to enter the U.S. in June. The Trump administration, which took heat for a 2018 policy of separating migrant families, has recently proposed holding families together indefinitely in detention. (Photo by Kris Grogan/Customs and Border Protection)

WASHINGTON – Five asylum-seeking families have sued the government for the “substantial and ongoing trauma” they say they suffered after being separated from one another when they crossed the border from Mexico into Arizona last year.

The lawsuit was filed Friday in U.S. District Court in Phoenix on behalf of five mothers and their children, all from Guatemala, who were separated in May 2018 and kept apart for at least two months, during which the mothers had little to no communication with their children.

Although all of the families have since been reunited and now reside in the U.S., they still grapple with lingering emotional damage their attorneys say “was no incidental byproduct of the policy” of the family separation enforced by the Trump administration last year.

“It was the very point. The government sought to inflict emotional distress in order to deter parents and children from seeking asylum in this country,” the suit says.

The Department of Homeland Security said it would not comment on pending litigation as a matter of policy.

The family separation policy stemmed from an April 2018 announcement by then-Attorney General Jeff Sessions, who promised that people trying to enter the U.S. illegally would be met with “the full prosecutorial powers of the Department of Justice.”

After a public outcry, President Donald Trump issued an executive order in June 2018 blaming Congress for failing to fix immigration law and saying that, while the administration would enforce the law, its intention was to “maintain family unity” where possible.

But thousands of parents and children were separated in those few months, including the Guatemalan mothers and their children, who are only identified by their initials in the complaint.

All five families crossed the border in Arizona before being separated. Some were then transferred to facilities run by U.S. Customs and Border Protection or Immigration and Customs Enforcement in California, Texas, Nevada and New York.

“Some of them (the mothers) were told that this would be a permanent separation – they really were left with no real idea if, or when, they would see their children again,” said Mary Kenney, directing attorney of the American Immigration Council and one of the attorneys in the case. “And the children were young, and often had no idea what was happening, and were being sent to strange places with strange people, not understanding any of it.”

An American Immigration Council news release on the suit said all five children continue to show signs of emotional and physical distress, even after being reunited with their mothers. It said one 7-year-old boy refuses to talk about the time he spent in a New York shelter and is reluctant to eat, while one 6-year-old girl has nightmares about her experience and “often screams out to her mother in the night seeking protection from people who might separate them again.”

The lawsuit said the effects of the separation were intentional, that the “trauma suffered by asylum seekers would deter other would-be asylum seekers from seeking refuge in the United States for fear of suffering the same fate.”

“Administration officials at the highest levels thus planned and implemented a policy of separating families both knowing that the policy would cause severe harm to the people it affected and specifically intending that it would cause such harm,” the complaint said.

The suit noted that even after officially backing off of the family separation policy, Trump in December was tweeting that if families are not separated “FAR more people will come. Smugglers use the kids!”

While the government would not comment on the case, one immigration attorney in Tucson said he would be surprised if government lawyers tried to argue that deterrence was not a goal of the family separation policy.

“They are using child separation as a means of punishing the families and trying to send a message to others,” said Mo Goldman, the Tucson attorney. “I mean, that seems to be their modus operandi here. And it’s not the right way to approach this problem – there’s got to be solutions that are not going to break up families and cause long-term psychological damage to children.”

The suit seeks damages to help the families with the cost of therapy and other treatment for the trauma they endured, according to their attorneys.

“They deserve justice, which includes compensatory damages that will help them access resources they will need to heal from this experience,” said Kate Melloy Goettel, associate director of litigation at the National Immigrant Justice Center, in the press release.

But while the migrants “absolutely want to be compensated for the harm that was inflicted on them,” they also have a larger goal, said Erik Walsh of Arnold & Porter, a Washington, D.C., firm on the suit.

“Each one of them has also said that one of the main reasons they’re doing this is in hopes that the United States government doesn’t do this to other families,” Walsh said. “They were so traumatized and horrified by what happened to them, and they view this lawsuit as a way of saying, ‘This cannot happen again.'”