More than 180 students from middle school to college gathered at Arizona State University’s Tempe campus in early September for a youth climate summit to help prepare them for the Arizona Youth Climate Strike, which takes place Friday afternoon. (Photo by Jordan Evans/Cronkite News) 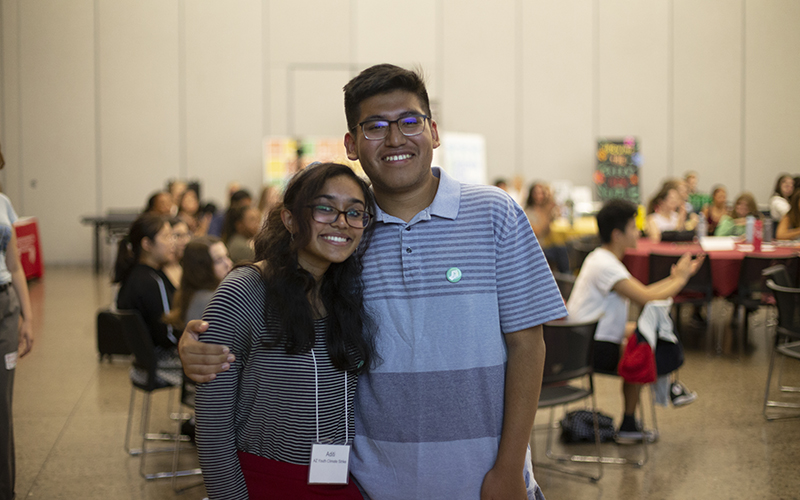 Aditi Narayanan and Brian Mecinas are co-leaders for Arizona Youth Climate Strike. Narayanan says the group is not just about mitigating climate change, but also showing young people how they can make a difference. (Photo by Jordan Evans/Cronkite News)

TEMPE – Thousands of young people in Arizona are expected to strike Friday in defense of the planet. In Phoenix, Tucson and Flagstaff, they plan to protest inaction on policies that could reduce greenhouse gas emissions and stop the globe’s destructive rise in temperatures.

Earlier this month, students ranging from middle school to college undergraduates gathered for a climate summit at Arizona State University’s Tempe campus to prepare for Friday’s youth climate strike at the state Capitol and the UN Climate Action Summit on Monday in New York.

Paul Hirt, professor of history and sustainability at Arizona State University, gave the keynote address at the summit. In an interview later, he said many of the solutions for climate change must come in the policy arena.

“This is the world they are inheriting and they have, therefore, an extra right to be concerned, to speak out and ask for solutions,” he said.

The summit, Hirt said, is the most recent example of climate activism by young people, which has been ramping up over the past two years. He credits three factors: protests against gun violence in schools, which set a precedent for youth activism; the election of a climate-change denier as president; and the protests spurred by his election, including the 2017 Phoenix March for Science.

Aditi Narayanan, Arizona Youth Climate Strike co-leader, said that it’s not only about affecting climate change but also showing young people how they can make a difference. The climate group, which is part of the national U.S. Youth Climate Strike, describes itself as a youth-led movement that advocates for climate action in the state.

“I want them to acknowledge that no member of society is powerless. A lot of people will say, ‘You guys are just teens, you guys are so cute,'” Narayanan said. “I love how hard you are actually working, but I think we can actually affect actual change.”

“We are here to do our best to hold elected officials accountable as well because we like to think that we are really uplifting other voices and making sure that opinions that are not normally expressed are expressed,” he said.

The summit was about sharing knowledge as much as acquiring it. Jackson Schiefelbein, a sustainability student at ASU, attended to share his experience with climate activism.

“Back when I was in high school, I created a youth activist platform in Ohio where I’m from, and I’m glad to be able to support other students here in Arizona who are doing the same thing,” he said.

Friday’s youth climate march, which is meant to send a message to state officials, begins at 2 p.m. at Maricopa County Courthouse and will proceed to the Arizona Capitol. The Facebook page of Arizona Youth Climate Strike, one of the organizers, said activists are “calling for the protection and restoration of 50% of the world’s lands and oceans, including a halt to all deforestation, by 2030.”

This march lines up with Hirt’s idea of how to bring about change.

“I think the key thing is to get organized, educated, and to come up with stories to tell about how climate change is affecting us all, and what the challenges for mitigating climate change is in the future,” he said. “Get people to focus on the next two, three or four generations that are really going to have to deal with the consequences of decisions that we make today.”