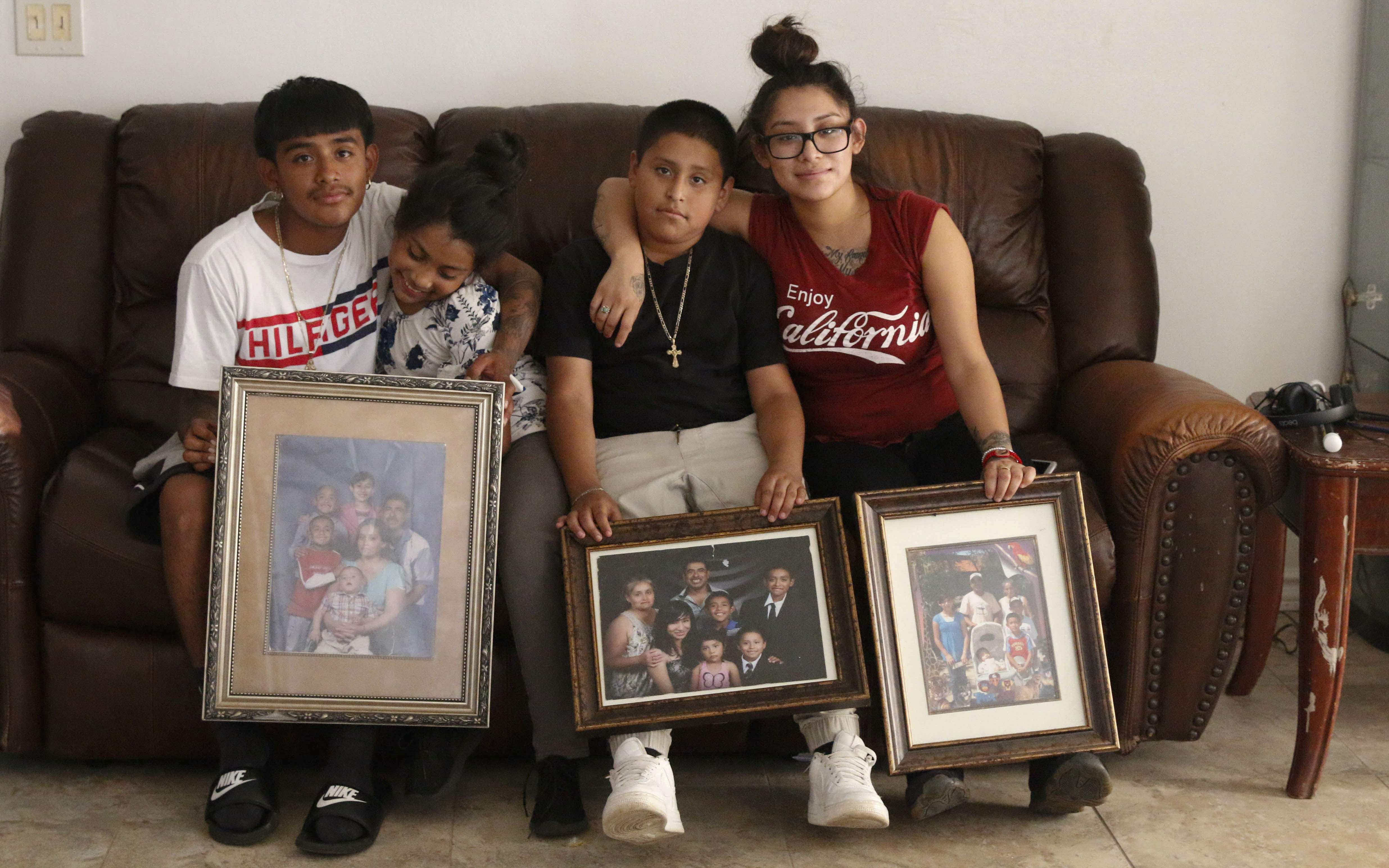 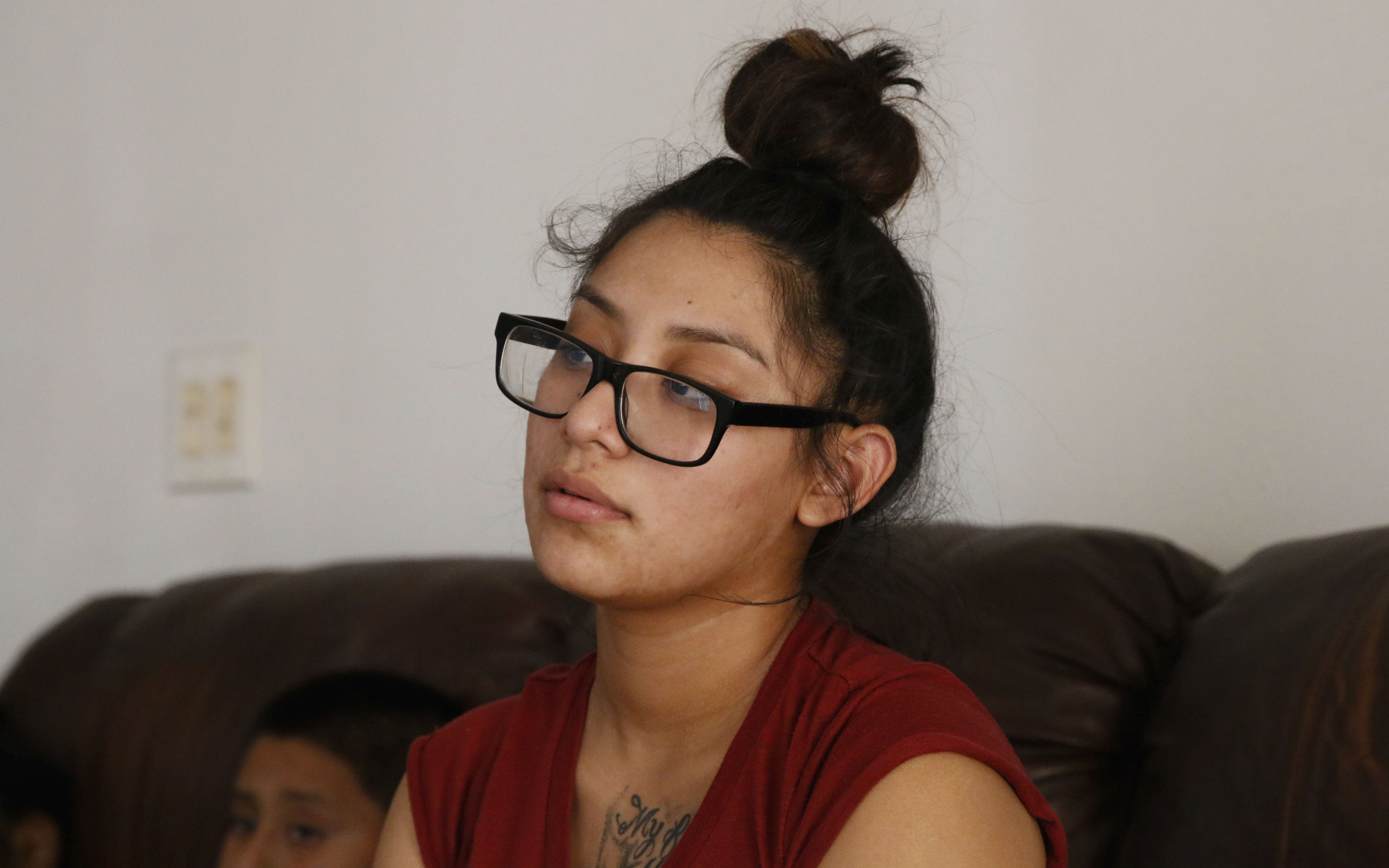 Stacy Molina, 20, has been her family’s main caretaker since her mother’s arrest in March. In Arizona, about 11% of children have had a parent locked up. New data show these children are more prone to mental health struggles. (Photo by Annika Tomlin/Cronkite News) 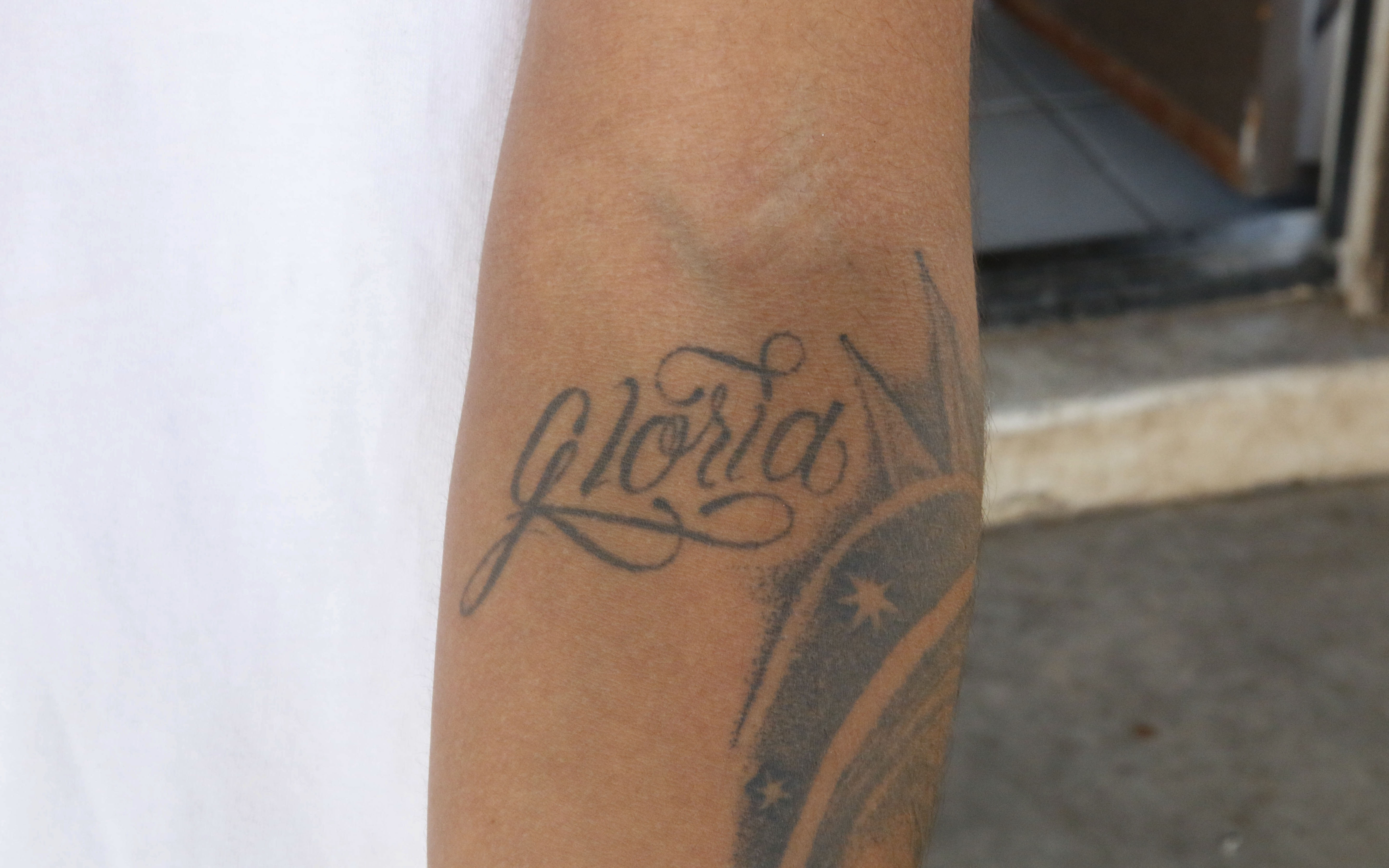 Daniel Molina shows off a tattoo of his mother’s name on his left arm. The 16-year-old dropped out of high school to work full time to provide for his family. (Photo by Annika Tomlin/Cronkite News)

PHOENIX – Moving boxes clutter the hallway, while family portraits rest unhung against a stark white wall. In the living room, two couches are positioned near one another; they’re some of the only furniture in the home.

This little house in far west Phoenix is, in essence, a clean slate. It’s the beginning of a new chapter for a family that has been forced to navigate life without parental support over the last year.

Molina, 20, is big sister to Daniel, 16, Jose, 10, and Guadalupe, 8. After their mother, Gloria Jimenez Najera, was arrested in March on suspicion of identity theft, Molina has had to assume the role of primary caregiver to the children.

“There are times when my sister will be like, ‘I miss her,’ and then she’ll just start crying in the middle of the night,” said Molina, whose father had been deported to Mexico weeks before her mother’s arrest.

“You just have to be strong, even if you don’t feel strong. I mean it’s still hard to cope. It’s really hard.”

Molina and her siblings are far from alone in their struggle.

Now new data shows that these children are prone to psychological effects that may linger for years.

A study last month in JAMA Network Open, a journal published by the American Medical Association, found that parental incarceration was associated with a number of problems starting in early childhood and continuing into adulthood.

By age 16, 475 of those kids had a parental figure who had been incarcerated. As children, that group had a higher prevalence of depression, behavioral problems and attention deficit hyperactivity disorder. As they reached adulthood, they were more likely to suffer from anxiety, social isolation, use drugs or themselves land behind bars.

Beth Gifford, lead author of the study and an assistant research professor at Duke University’s Sanford School of Public Policy, said the span of the study allowed researchers to account for other factors that might cause such conditions.

“Because we were looking for outcomes in young adulthood, we were able to control for … childhood adversity such as family socioeconomic status, exposure to child maltreatment and some other things that potentially would have impacted these outcomes,” she said.

Dr. William Copeland, a professor in the department of psychiatry and behavioral sciences at Duke University, managed the day-to-day data collection and said the findings point to a larger public health issue being fueled by high rates of incarceration.

“In the last 30 to 40 years, incarceration rates have gone up like crazy in the United States, which means that there are a lot more children that are growing up in households where they have an incarcerated parent,” Copeland said.

“Our message is public health. We need to come up with an alternative to these high incarceration rates – because it’s addressing one problem, but it’s creating other problems that are going to be with us for generations.” 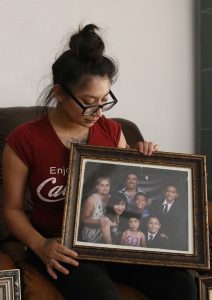 Molina said she “didn’t know what to feel” in the moment because everything happened so quickly. Months later, she still struggles to describe what it was like seeing her mother escorted away.

“They found some papers that weren’t hers under her name – like Social Security that wasn’t hers,” she said.

Now she and her brothers and sister have been forced to grow up fast. Molina insists on being as honest as possible with them about the problems their family faces.

“I hide nothing,” she said. “They’re smart kids, so they know pretty much everything.”

Among the most difficult moments are when her younger siblings ask her about their mother’s whereabouts and when she’ll be home. The most she can do is “remind them of the good memories of Mom,” Molina said, and be there for them whenever she can.

“I just don’t let them forget her,” she added.

Daniel, 16, dropped out of high school to work full time in landscaping to provide for the family.

The youngest, Guadalupe, is preparing to celebrate her ninth birthday later this month – without her mother. When asked what she wanted, the youngster humbly responded: “Nothing. I don’t need anything.”

Molina’s own dreams have been put on hold. She recently quit her job at a hotel so she could dedicate more time to caring for her siblings. She received some financial support from such organizations as Puente Arizona – a grassroots group that works to help migrant families. That, in part, allowed the family to move into a new home. But for the most part, the siblings try to get by on their own.

In Arizona, an estimated 160,000 children live in homes headed by grandparents or other relatives, according to the Arizona Children’s Association. And yet only a few groups statewide are working to offer resources for such families.

Anna Loebe, program supervisor at the Children’s Association, oversees a program offering support services, with much of her work focused on providing help for caregivers like Molina.

“We know that the children are going through issues of abandonment, loss and a number of different behavioral issues. Many of our cases are results of children’s parents being incarcerated,” said Loebe, who holds support group meetings every Tuesday, where she hears the “real-life effects” on caregivers.

Many report feelings of isolation, Loebe said. Support groups have proven to be a valuable resource, allowing caregivers to connect with others in similar situations.

The Molina children have had limited contact with their mother – a few video chats from Estrella Jail. She pleaded guilty to a reduced charge and was sentenced to probation, according to court records. Just days ago, she was transferred over to Immigration and Customs Enforcement, said Sgt. Joaquin Enriquez of the Maricopa County Sheriff’s Office.

Amid their circumstances, the family’s recent move felt like a refreshing, necessary change – one that provided much-needed closure after their mother’s arrest.

“When we were at that old house, we were constantly just scared for the cops to come back,” Molina said.

It’s impossible not to worry about the long-term emotional effects of their mother’s absence, especially on the little ones, Molina said. But their reliance on one another has given them some sense of stability in an otherwise tumultuous few months. 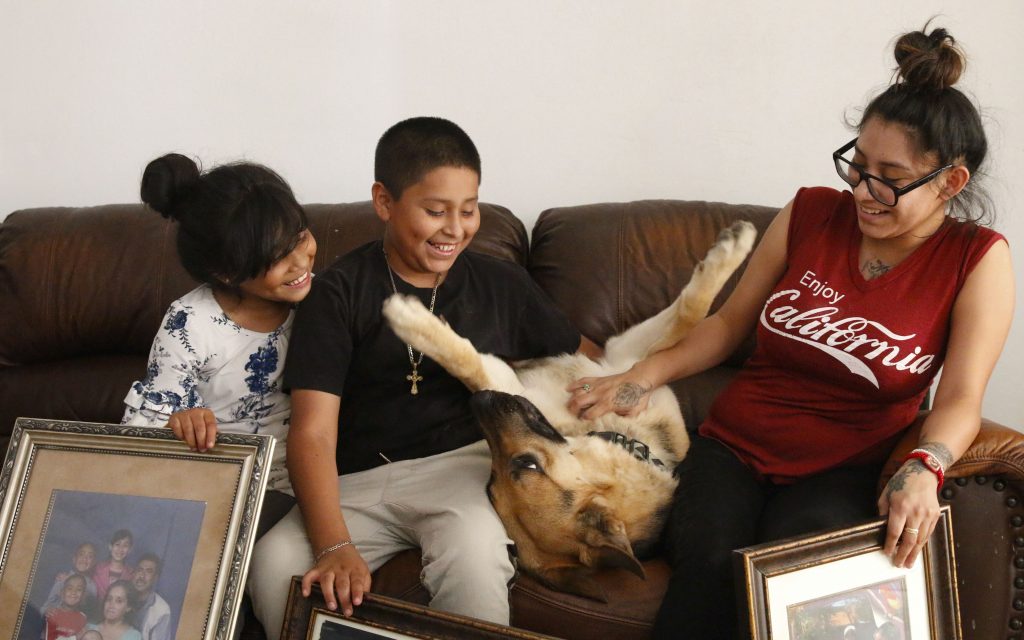 Max, the family dog, joined Guadalupe, Jose and Stacy in their Phoenix home. The Molina family’s recent move provides an uplifting change of scenery after their mother’s arrest. (Photo by Annika Tomlin/Cronkite News)

Sitting next to one another on the couch one recent afternoon, the children clung tightly to photos of their family. Jose silently twirled a gold cross hanging from his neck; it had been his mother’s.

As the group cuddled for a photo, Guadalupe giggled and flashed a sweet smile. And when her bangs dropped over her eyes, Molina reached over, like any mother would, to gently push them away.