WASHINGTON – Critics vowed Thursday that the Supreme Court’s decision to allow the Trump administration’s restrictive asylum policy move forward will not be the last word and that they intend to keep challenging the plan.

U.S. Citizenship and Immigration Services Director Ken Cuccinelli welcomed the ruling that said the administration can enforce the policy for now – but even he said he expects his agency will “immediately get sued” by pro-immigration groups.

Advocates said Thursday they intend to take him up on it.

“This was only a temporary ruling,” Lee Gelernt, deputy director of the American Civil Liberties Union’s Immigrant Rights Project, said of the court’s decision. “We’re going to continue with challenging it in both the 9th Circuit and in the District of Columbia and hope to prevail on the merits.

“We can’t stop challenging it until there’s no other options given the danger people face,” he said.

At issue is a Trump administration policy that would deny asylum to migrants who cross another country to reach the U.S. unless they first seek and are denied asylum in that other country. It is largely aimed at the surge in migrants from Central America – more than 400,000 so far this fiscal year – who have tried to enter the U.S. after crossing Mexico.

Opponents took the plan to court and U.S. District Judge John Tigar this summer agreed to block the rule while legal challenges worked their way through the courts.

Tigar’s initial nationwide injunction was narrowed by the 9th U.S. Circuit Court of Appeals to just apply in Arizona and California, the two states in the circuit that are on the southern border. That meant the rule could be applied to migrants seeking asylum in Texas and New Mexico. 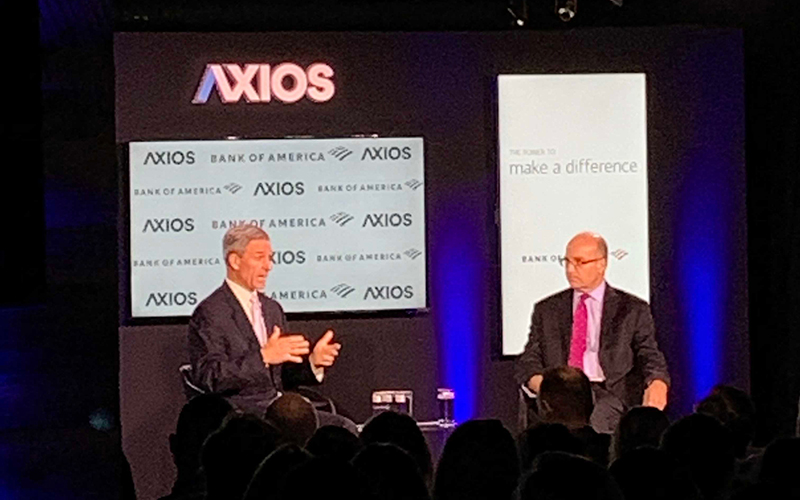 U.S. Citizenship and Immigration Services Director Ken Cuccinelli, left, welcomed the court ruling that will let a new asylum rule proceed, but conceded he expect s to be back in court over it soon. (Photo by Vandana Ravikumar/Cronkite News)

But Tigar on Monday expanded the injunction back to a national ban. That was overturned altogether Wednesday by the Supreme Court, which said the policy can be put into effect while the case works its way through the courts.

Cuccinelli said at an event hosted Thursday by Axios that the policy is needed to help alleviate the huge number of asylum cases in the U.S. that have been driven by the surge Central American migrants.

“One, they’re clogging up the system so we can’t get to people with legitimate asylum claims, and two, they’re hoping to get released in the interior, and then not show up, or at least be delayed for years and years and years,” he said.

He called the policy a “very significant change in the circumstances.”

“Obviously, it wouldn’t apply to those coming from Mexico,” Cuccinelli said. “But it would apply to anyone coming through Mexico or other countries.”

An official with USCIS said Thursday that the agency “is fully implementing on a nationwide basis” the asylum rule as a result of the Supreme Court’s ruling.

“It’s a win for the administration, but it’s a provisional win,” said Mark Krikorian, executive director for the Center for Immigration Studies, a think tank that favors reduced immigration.

“Until there’s some development in the merits of this case, the administration can implement its preferred policy,” he said.

For now, that means that “people who may have been eligible for asylum before won’t be eligible for protection in the U.S. anymore,” said Jessica Bolter, an associate policy analyst with the Migration Policy Institute.

“We’ve already seen (migration) flows go down in the last couple of months, largely because of the ‘remain in Mexico’ policy, which has kind of been a first step in making access to asylum more difficult,” Bolter said.

Bolter and others expressed skepticism at the idea that the policy will actually deter people from attempting to cross the border. Though some migrants are applying for asylum in Mexico instead of the U.S., she said “it’s not likely” that all potential asylum applications will be routed to other countries.

Gelernt noted that prior attempts to quell illegal migration with restrictive policies have not worked as promised.

“Just like when they thought they were going to deter asylum seekers from coming by taking away their children at the border, we suspect this will not deter people,” he said. “If people are in danger, they’re going to come.

“It’s unrealistic to assume that they’re going to seek asylum in places like Guatemala or Mexico given the danger there that they face, and the lack of a full and fair asylum process in those countries,” he said.

For now, the rule will apply to those who crossed the border after July 16, who failed to apply for asylum in at least one other country before reaching the U.S. and who did not have a deportation proceeding before Sept. 11, the date of the ruling, said USCIS spokesperson Jessica Collins.

“Until Congress can act with durable, lasting solutions, the rule will help reduce a major ‘pull’ factor driving irregular migration to the United States and enable the administration to more quickly and efficiently process cases originating from the southern border, leading to fewer individuals transiting through Mexico on a dangerous journey,” Collins said in a prepared statement.

But the policy is already scheduled to be back in court on Dec. 2, Bolter said, when the 9th Circuit will hear “the government’s appeal of the district court’s original preliminary injunction.”

“Regardless of their decision, the losing side will likely appeal it to the Supreme Court, and depending on when the court takes it up, there could be a final decision anywhere from spring to fall next year,” she said.