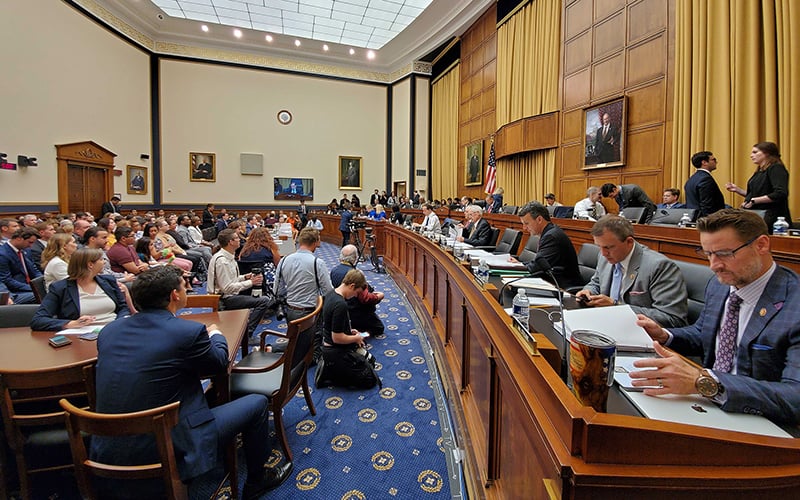 WASHINGTON – A House panel worked late into the night in a sometimes heated, sometimes emotional hearing on gun-control bills Tuesday, a potential preview of congressional debates to come in the weeks after a string of mass shootings.

And in another preview of what could come, the Democrat-controlled House Judiciary Committee rejected all Republican amendments and passed the three bills on straight party-line votes.

The bills – including a ban on high-capacity magazines and “red flag” warning measures – were either the solution to our nation’s “moral crisis” in the words of one Democrat, or law that would “turn the Constitution on its head,” according to Rep. Andy Biggs, R-Gilbert. That was echoed by Rep. Debbie Lesko, R-Peoria.

“We want to make sure we’re not taking away people’s constitutional rights without due process,” Lesko said. “This is why I oppose this legislation.”

But GOP arguments were countered by emotional appeals for gun control from Democrats, including Rep. Lucy McBath, D-Ga., whose son was shot to death in 2012.

It was the first major hearing since Congress returned from its monthlong August recess, a month in which mass shootings in El Paso and Odessa, Texas, Dayton, Ohio, and Gilroy, Calif., left 42 people dead and scores wounded.

Tuesday’s eight-hour meeting followed several days of appeals from Democratic leaders in the House and Senate for action on the bills considered this week, as well as a bill expanding background checks that passed the House in February but had languished in the GOP-controlled Senate.

Senate Majority Leader Mitch McConnell has repeatedly said he will only bring up for a vote those bills that have some chance of being signed by President Donald Trump.

But gun-control advocates said this week that they think the Senate is starting to feel pressure for action, as a result of the most-recent shootings. And Trump, in remarks to reporters Wednesday, said he is in meetings with senators from both sides of the aisle to come up with what he called a “gun-sense” bill. 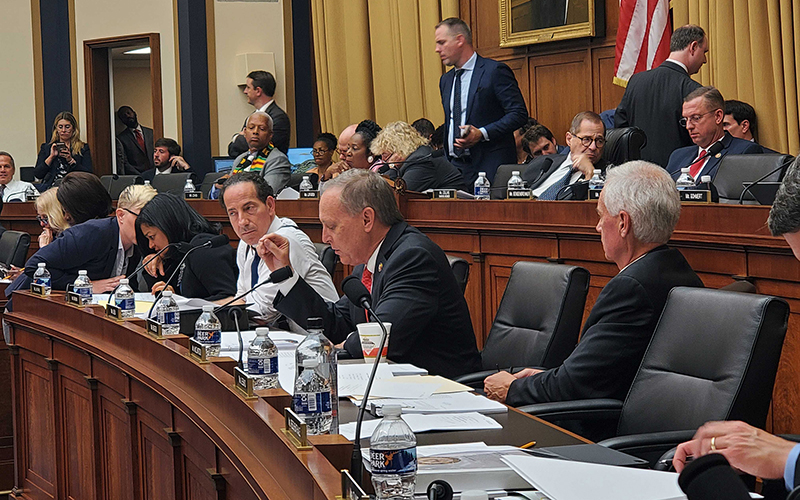 Rep. Andy Biggs, R-Gilbert, prepares to make a point at the committee hearing. Biggs argued that gun-control advocates too often ignore the good guns can do, like self-defense. (Photo by Wissam Melhem/Cronkite News)

“We’re going to take a look at a lot of different things and we’ll be reporting back in a fairly short period of time,” Trump said. “There’s a lot of things under discussion. Some things will never happen … and some very meaningful things can happen.”

Chelsea Parsons, vice president of Gun Violence Prevention Policy at the Center for American Progress, said she believes there has been significant progress since Congress came back to town.

“I think that we have seen since the shootings that happened over the summer that the Senate leadership is starting to feel pressure on this issue,” Parsons said. “Mitch McConnell felt enough pressure that he needed to indicate some willingness to address this issue after the recess. That speaks to progress.”

Andrew Patrick, media director of the Coalition To Stop Gun Violence, said he believes the change among GOP senators is being driven by the public’s shift in the politics of the issue.

“It is an issue that people are going to vote on,” Patrick said. “There are a lot of senators in the Republican Party who are up for election in 2020, including in Arizona Senator (Martha) McSally … so we’re going to have to act on this issue eventually or people are going to lose their jobs and are going to be voted out of office.”

The bills considered in the House this week would ban the sale, possession or manufacture of high-capacity magazines; prohibit those convicted of a hate crime from getting a gun; and give states funding to enforce a federal law requiring that police take firearms from individuals deemed a danger to themselves or others.

Those so-called “red flag” laws drew the most debate in the Judiciary Committee, with opponents arguing that confiscating a person’s gun without a court hearing would violate gun-owners’ due process rights.

“I don’t think we can tolerate what is a constitutional right turned onto its head,” said Biggs. He said the positives of gun ownership are usually overlooked, citing examples of people who have used AR-15 rifles in self-defense.

Rep. Kelly Armstrong, R-N.D., said the red flag bill could lead to confusion between federal and state laws on determining who is a dangerous individual.

“If you don’t think that’s going to cause a significant amount of problems when you are actually on the ground … you’re nuts,” Armstrong said. “Outside the issue of guns and how politically polarizing it is, this is not good policy.”

But while Republicans blamed gun violence on the “moral crisis” facing the country, McBath said she it is guns themselves that pose the moral crisis.