Among those testifying in front of the friendly crowd in support of the Born-Alive Abortion Survivors Protection Act were (from left), Jill Stanek; Dr. Robin Pierucci, a neonatalogist; Dr. Kathi Aultman, a gynecologist; and Tessa Longbons, a researcher with the Charlotte Lozier Institute. (Photo by Lindsay Walker/Cronkite News) 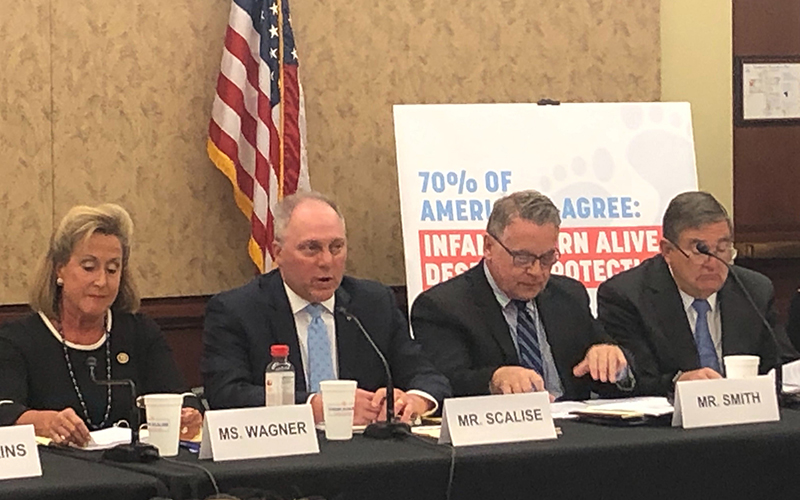 Rep. Ann Wagner, R-Mo., and Rep. Steve Scalise, R-La., two of the main sponsors of the “born alive” abortion bill, hope to force a vote on the measure they say is being blocked by Democratic leaders. (Photo by Lindsay Walker/Cronkite News) 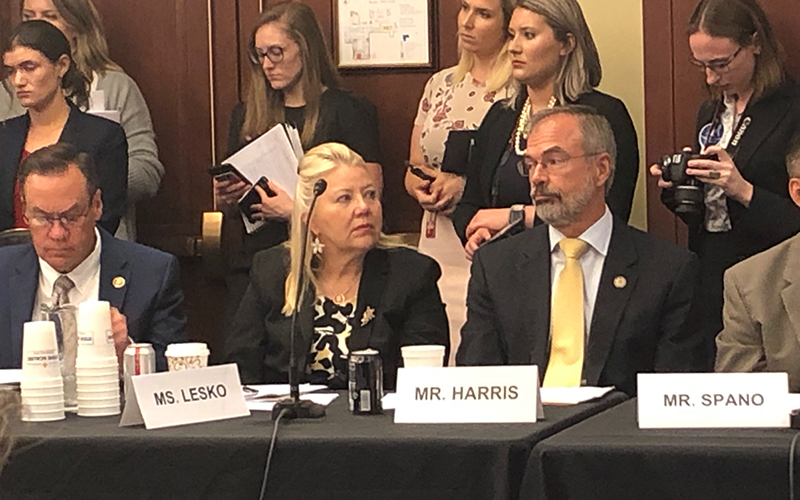 Rep. Debbie Lesko, R-Peoria, called the “born alive” abortion bill one of the most important issues before Congress. She is one of 190 co-sponsors, who include all four Arizona Republican House members. (Photo by Lindsay Walker/Cronkite News)

WASHINGTON – Despite repeated failures, Republican leaders rallied Tuesday in support of their latest version of the Born-Alive Abortion Survivors Protection Act, which Rep. Debbie Lesko, R-Peoria, called “the most important bill in Congress.”

She was one of a score of GOP lawmakers at an hours-long hearing where lawmakers and health care providers called for action on the bill that would require doctors to provide the same life-saving care to babies born alive after a failed abortion that they would give to any baby.

“It is murder. There should not be a question in this country that babies should be protected,” said Rep. Steve Scalise, R-La., a main sponsor of the bill, which would also levy jail time or fines for medical providers who fail to comply.

Opponents said the addresses a problem that doesn’t exist and contributes to the harmful rhetoric that surrounds abortion. It also inserts the government into what should be a private decision, said Tayler Tucker, media relations manager for Planned Parenthood Advocates of Arizona.

“These propositions are drafted by politicians and not medical professionals,” Tucker said. “The person that should have the most agency in that shouldn’t be the government, but should be the patient, their provider and their family.”

Tucker said she was not surprised that the bill – which is introduced in every Congress and repeatedly fails – is back. She believes this year’s version will suffer the same fate, particularly because earlier versions failed even when both chambers of Congress were in Republican hands and the House is now controlled by Democrats.

The last version of the bill passed the Republican-controlled House in January 2018 but was not able to get the 60 votes needed in the Senate to block a Democratic filibuster.

The current bill was introduced in February by Rep. Ann Wagner, R-Mo., with 190 co-sponsors, only a handful of whom are Democrats. All four Republicans in the Arizona delegation have signed onto the bill, but none of the state’s Democrats has.

The bill has since languished in the House Judiciary Committee without a hearing, and in April, Scalise and Wagner filed a discharge petition to force a vote by the full House. That petition needs 218 signatures – a majority of the House – to trigger a vote; Republicans said Tuesday they’re just 15 signatures shy of their goal.

Lawmakers at Tuesday’s event said the petition is needed because House Speaker Nancy Pelosi has blocked attempts to act on the bill 80 times.

“Our Democratic Speaker of the House refuses to put a bill on the floor that would protect a human being’s life when they’re born alive,” Lesko said after the hearing. “It’s just unbelievable to me that we are even talking about this.”

If it could get out of Congress, Scalise said, the bill would become law.

“The president said he wants this on his desk,” Scalise said of Trump, who tweeted his displeasure the last time the bill failed in the Senate.

Arizona is one of a handful of states with laws that require physicians to use “all available means and medical skills … to promote, preserve and maintain” the life of a fetus that has survived an abortion.

The law took effect in late 2017. The Arizona Department of Health Services said there were 10 reports of an embryo or fetus delivered alive in the last five months of that year, a year in which 12,336 abortions were performed in the state. It was the most recent year for which state data were available.

At Tuesday’s hearing, several health care workers testified to their experiences with babies who they said survived abortion attempts. Tessa Longbons, a researcher with the pro-life Charlotte Lozier Institute, brought forth data on born-alive abortions, including Arizona’s 2017 numbers.

Despite the long odds, Lesko said she hopes Republican rallying will spur some Democrats to cross the aisle and sign the discharge petition, along with the few Democrats who have cosponsored the bill.

Tucker acknowledged that although Planned Parenthood is concerned about any attempts to rein in abortion rights, the organization is confident this bill will not pass the Democrat-controlled House.

“Are we concerned? Yes,” Tucker said. “But do we know that we have the power behind us and that our fight is the right fight to be in? Yes.”