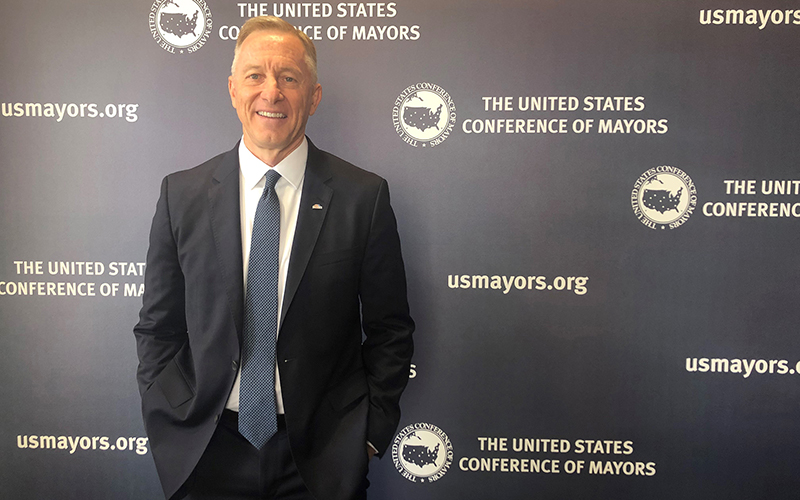 Mesa Mayor John Giles was in Washington with a delegation of 300 other mayors and police chiefs to urge the Senate and the White House to pass gun-buyer background check legislation. Giles said most voters he has talked to support the idea, and lawmakers are the holdup. (Photo by Lindsay Walker/Cronkite News)

WASHINGTON – Mesa Mayor John Giles said he has spoken to friends, neighbors and strangers – including many conservatives – who he said support universal background checks on gun purchases, particularly after a string of mass shootings last month.

“Frankly, the leaders of our country and our communities need to catch up to where the public is on this issue,” he said.

That’s why Giles was in Washington Monday with police chiefs and mayors from across the country, meeting with senators and White House officials to urge action on House bills that have been stalled in the Senate since February.

The visits come as Congress returned from its five-week August recess – five weeks during which a total of 38 people were killed in three separate mass shootings in Dayton, Ohio, and El Paso and Odessa, Texas.

Giles was one of four Arizona mayors – along with Phoenix Mayor Kate Gallego, Tempe Mayor Mark Mitchell and Tucson Mayor Jonathan Rothschild – who joined close to 300 others from around the country in a letter urging Senate leaders to come back early from recess and deal with the issue.

That letter urged the senators to take up the Bipartisan Background Check Act of 2019, a bill that would require background checks of gun purchasers in virtually all transactions.

The bill, HR 8, was introduced on the eighth anniversary of the 2011 Tucson shooting that killed six people and wounded 13, including then-Rep. Gabrielle Giffords, the target of the attack. It quickly passed the Democrat-controlled House on a mostly party-line vote, but has yet to get a hearing in the GOP-controlled Senate, where Majority Leader Mitch McConnell has said he will not bring a bill that he knows President Donald Trump will not sign.

“If the president took a position on a bill, so that we knew we would actually be making a law, and not just having serial votes, I’d be happy to put it on the floor,” McConnell said in an interview last week with radio host Hugh Hewitt.

Democratic leaders in Congress called on McConnell to allow a vote on the bill, and sent a letter to Trump urging him to defy the National Rifle Association and use his “leadership and influence over Republicans in Congress” to support background checks. Trump on Monday honored police and civilians who responded to the shootings last month in Dayton and El Paso.

“Please do not squander it by acceding to NRA-backed proposals or other weak ideas that will do nothing to stop the continuing, horrific spread of gun violence and may, in some cases, actually make our communities less safe,” their letter to Trump said.

In remarks to reporters Monday, Trump said his administration was “talking about a lot of different things” in response to the August shootings, but added “at the same time, we have to protect our Second Amendment” right to bear arms.

Republicans in the House argued earlier this year that background checks would not have helped in the shootings that had occurred to that point in the year. That argument was echoed Monday by an expert at the Cato Institute, who said that strict gun legislation and a reduction in shootings do not necessarily go hand-in-hand.

“There is almost no correlation between any particular gun regulation and any significant reduction in gun violence,” said Clark Neily, Cato’s vice president for criminal justice.

And any proposal cannot infringe on the Second Amendment, Neily said.

“Whatever we do by way of gun policy must be consistent with the Constitution,” he said.

Neily said Arizona is one of about a dozen states with little gun legislation, and he thinks that stricter regulations would be a tough sell in the state.

But Giles said he expects the state’s senators, Democrat Kyrsten Sinema and Republican Martha McSally, will support universal background checks. He said McSally would be particularly crucial on the vote.

Requests for comment from McSally’s office were not immediately returned Monday, but Sinema’s office said she is looking for some action now that Congress is back from recess.

“Kyrsten believes the levels of gun violence in the United States are unacceptable, and wants to see both parties forge a productive conversation surrounding firearms,” said a statement from a Sinema spokesperson.

The mayoral delegation – which included mayors from Dayton and Parkland, Fla., as well as several police chiefs – was scheduled to meet with White House officials Monday, followed by congressional visits Tuesday.

Giles said he is hopeful their lobbying will make an impact.

“The tipping point has occurred on this issue,” he said. “The time for doing nothing has come and gone and this is an issue that really needs to be addressed in this country.”