Arizona Republicans rally for the Trump-Pence ticket just days before the 2016 election in this file photo. The state GOP is moving to do away with its presidential preference primary in 2020 so President Donald Trump would not have to go through a primary challenge in the state. (Photo by Keerthi Vedantam/Cronkite News).

WASHINGTON – President Donald Trump’s road to renomination could get easier through Arizona, with the state Republican Party signing the paperwork Monday that will let it drop its presidential primary next year.

One analyst turned his nose up at state Republicans who “don’t want to go through the process of actually allowing people to vote,” but few others seemed to be surprised by the move – and most greeted it with a shrug.

“Why spend the money on something when you know what the outcome will be?” said Mike Noble, a political consultant with Scottsdale-based MBQF Consulting.

Since then, former South Carolina Gov. Mark Sanford has thrown his hat in the ring. Trump belittled all three Monday as the “three stooges” and said he did not plan to debate them because “I’m not looking to give them any credibility.”

Published reports said Kansas, Nevada and South Carolina are looking to cancel their 2020 presidential primaries or caucuses as well. Party officials in Kansas and Nevada could not be reached for comment Friday, but South Carolina GOP Chairman Drew McKissick treated it as a routine move.

“There is strong precedent on the part of both parties to not hold a primary when they control the White House,” McKissick said in a statement released by the party.

Defending the incumbent is hardly new: Arizona’s GOP did it in 2004 for George W. Bush and state Democrats did the same in 1996 for Bill Clinton and 2012 for Barack Obama.

Arizona GOP Chairwoman Kelli Ward said in a statement Friday that “Arizona Republicans are fired up to re-elect President Trump to a second term.”

A video posted by the party Monday showed Ward delivering a letter to the Arizona Secretary of State’s office, notifying the office of the party’s intention to opt out of the presidential preference election next year. Ward said the party would notify the secretary of state of its presidential electors “when the time comes.”

The Arizona Secretary of State’s Office said in an email that the party had until Sept. 16 to notify the office that it intends to withdraw from the presidential primary. 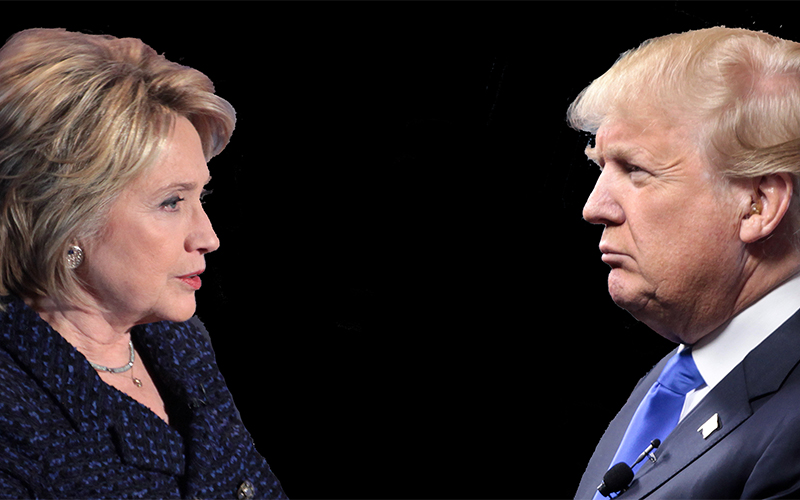 Hillary Clinton and Donald Trump in a photo illustration from 2016, when he beat her by just 3.5 percentage points in Arizona. (Photos by Gage Skidmore/Creative Commons)

Grant Woods, who was a Republican when he was elected Arizona’s attorney general in the 1990s, said in an email that he is not thrilled by the possibility of a canceled primary.

“There is not much Republican left in the Republican Party,” said Woods, who left the party and registered as a Democrat last year. “It’s no surprise that they don’t want to go through the process of actually allowing people to vote.”

Woods said he hopes that alienated Republicans will support a moderate Democratic candidate instead.

An official with the Arizona Democratic Party said “we’re not too concerned” by a possible GOP cancellation of its primary, saying it would not change the way Democrats plan to campaign.

“A lot of folks in Arizona are going to be disappointed,” said Matt Grodsky, the acting communications director for the state Democrats, “and will continue to be disappointed by decisions that the Republican Party and Donald Trump make in the next year.”

An August poll by OH Predictive Insights, where Noble is chief of research and managing partner, said Trump’s disapproval rating in Arizona has climbed to 52 percent. But a national survey the same month by Monmouth University Polling Institute found that 84 percent of Republicans approve of Trump’s job in office.

Dave Wells, a political science professor at Arizona State University, said it’s too early to accurately predict what will happen in the state. He agreed that Walsh and Weld were unlikely to fare well, but said a Republican with better name recognition – like 2016 presidential candidate and former Ohio Gov. John Kasich – might stand a chance.

Wells did predict, however, that Arizona Republicans will support the cancellation of the primary without “much blowback.” And he said Arizona could play a decisive role in the election, particularly if younger voters turn out.

“There’s a clear split in the electorate age-wise,” he said. “People who are under 40 are heavily going to vote Democratic in Arizona. And the people who are older than 40 will vote for Trump – I don’t know to what degree.”

But he noted that predictions can be a tricky business with this administration.

“Everything with Trump is unprecedented,” Wells said.