About 50 people attended a March for Our Lives Arizona town hall at the First Church United Church of Christ in Phoenix to ask state representatives and congressional candidates about their approaches to ending gun violence. (Photo by Allie Barton/Cronkite News) 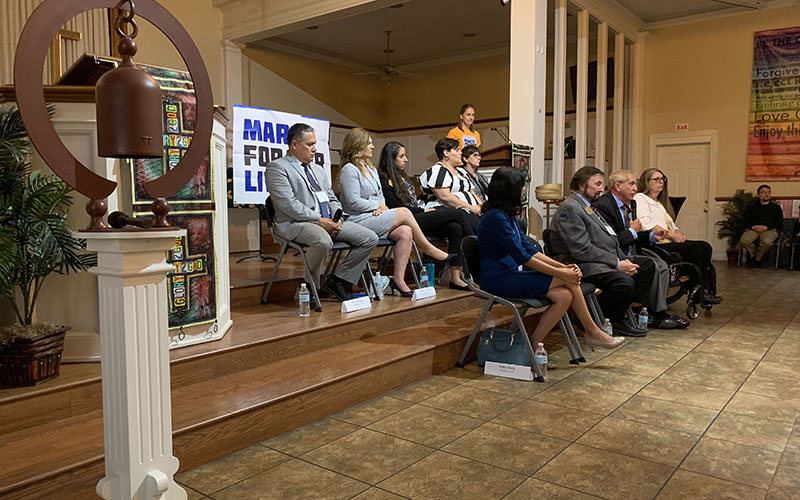 The legislators at the March for Our Lives Arizona town hall included Rep. Jay Lawrence, R-Scottsdale (front row, second from the left), who blamed gangs for gun violence in black and brown communities and said police are being disrespected. (Photo by Allie Barton/Cronkite News)

PHOENIX – Some in the audience snapped their fingers, showing approval of a politician’s words on gun violence. At times, some gasped. An audience of young and older, racially and ethnically diverse, came to a recent town hall to listen to ways to stop gun violence, particularly in communities of color.

Congressional candidates and members of the Legislature spoke at the gun-reform town hall organized by Genesis Rivas, 17, director of special projects for March for Our Lives Arizona. 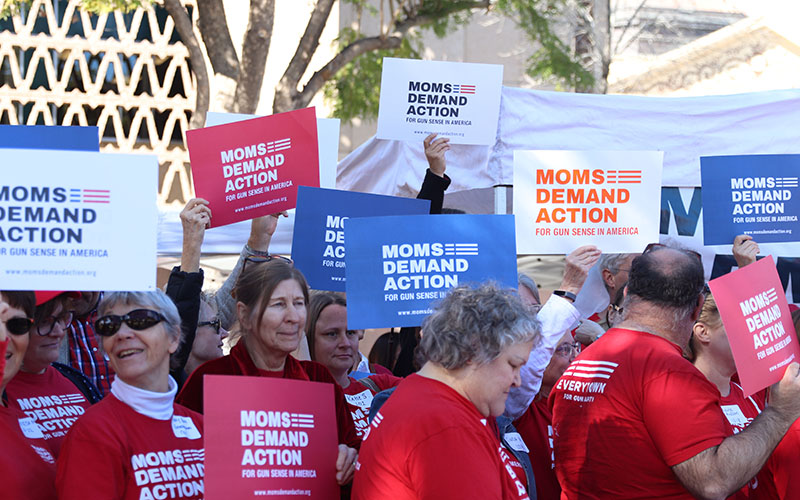 Rivas joined March for Our Lives Arizona about a year ago after being inspired by the youth advocacy of the Parkland students, who started the national movement after a shooting at their school, Stoneman Douglas High School, killed 14 students and three teachers. Soon after she got involved, her cousin killed himself with a firearm.

“It hits really close to home,” Rivas said. “I just started thinking if we had better safer laws that would have prevented him from getting to that kind of firearm, he would still be here.”

“We see that this is happening in many Latino communities and also for other people who aren’t as represented in all of the nation,” she said. “We want to see a change in that.”

Last week’s forum came after two mass shootings in El Paso, Texas, and Dayton, Ohio, that took place within 13 hours of each other in August. March for Our Lives hosted the town hall to allow the public to ask state lawmakers and congressional candidates how they plan to stop gun violence.

Members of Moms Demand Action, another gun reform group, were among nearly 50 people at the town hall at First Church United Church of Christ near downtown.

The town hall leaned heavily toward gun reform, with some speakers saying they own guns but supported such “common sense” gun reforms as universal background checks. The National Rifle Association has said it doesn’t support those checks, arguing that the right to own “assault weapons” is protected under the Second Amendment.

State Rep. Jennifer Longdon, D-Phoenix, a gun owner, said she has “personally lived with the consequences of gun violence” since she was paralyzed during a random shooting in 2004. But, she said, her biggest concern has been about the terrifying effects of gun violence on children.

“Our children should never have to be as brave or as afraid as my son was that night, peering through those bars, telling his mom goodbye,” said Longdon, who represents District 24 in central Phoenix and south Scottsdale.

Solutions to gun violence aren’t based on race, said state Rep. Diego Rodriguez, a Democrat who represents Laveen and South Phoenix. Lack of access to good education, jobs and transportation are the root cause of gun violence, he said, and erasing those inequities is where solutions lie.

“The issues that affect black and brown communities affect every one of us,” Rodriguez said. “What I would suggest is we go back to some of the basic things. What do some of these affected communities have in common? Very often they’re educationally disadvantaged. They don’t have access to resources.”

The crowd gasped at the remarks of Rep. Jay Lawrence, a Republican who represents Fountain Hills, Scottsdale and Rio Verde. He said people disrespect police and their role in stopping crime. 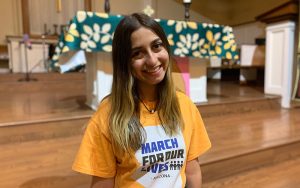 Genesis Rivas, 17, director of special projects for March for Our Lives Arizona, works to get other young people involved in the gun-reform movement. A late-August town hall she organized brought together public officials, candidates, and about 50 people of different ages, backgrounds, races and ethnicities. (Photo by Allie Barton/Cronkite News)

“I hate to bring realism to any of the conversation,” Lawrence said, “and I can see you taking a deep breath already, ‘What is this nutcase going to say now?’ Black and brown communities, if you look at the weapons that they have, they are not licensed. They are better armed than the police officers who are supposed to be controlling them. They have firearms galore. Black and brown communities, black communities in particular, have gangs. And the gangs have to be stopped.”

Rivas later said she had a hard time not visibly reacting to Lawrence’s words. His remarks indicate that some in the country consider themselves the “superior group to others” when it comes to dealing with gun violence, she said.

In light of the hatred against Hispanics that fueled the mass shooting in El Paso, Rivas said she has lost a sense of stability and that being Mexican might make her more vulnerable to a future shooting.

“My mom gets very, very anxious when I ask her to go to things, like First Friday,” Rivas said. “She was scared of letting me go because there were big crowds, and being in a minority group, a (shooter) might target me first instead of my white friends.”