Ring video doorbells lets homeowners see who’s at the door, and its Neighbors app lets them share that video with police. That concerns some privacy advocates, but police and Ring insist that police do not have unfettered access to video. (Photo by Jenni Konrad/Creative Commons) 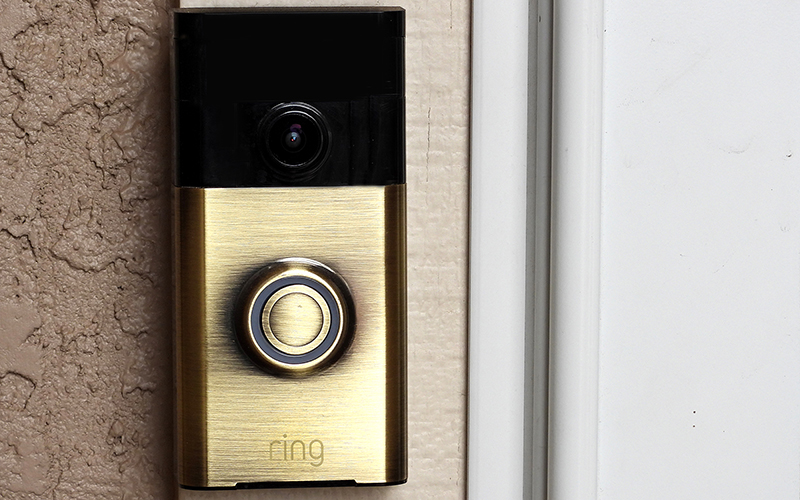 More than 400 police departments across the country are participating in Ring’s Neighbors program, which lets homeowners share video from their doorbell cameras and lets police reach out to Ring owners. (Photo by Richard Thompson/Creative Commons)

WASHINGTON – Phoenix and 11 other Arizona police departments are among more than 400 in the U.S. that have partnered with video-doorbell maker Ring to connect authorities with homeowners who use the company’s technology.

Some privacy advocates have raised concerns that the program could give police “access to essentially a networked” closed-circuit TV of communities.

But police agencies and the company insist that safeguards are in place and that the program does not give authorities unfettered access to user video. More importantly, they say, it can be a tool for keeping communities safe – both by alerting Ring owners to crimes and soliciting their help in solving them.

The ability to reach out directly to homeowners has allowed the El Mirage Police Department “to solve more things on a lower level than having to wait for it to process through” regular channels, said Bryan Dezso, a community policing specialist for the department. It has been taking part in Ring’s “Neighbors” program since April.

“If we weren’t able to post that quickly and get a quick turnaround, there would literally be cases sitting on a detective’s desk,” Dezso said.

Since Ring began offering its Neighbors app in May 2018, the program has been adopted by police departments across the country. Under the program, police are able to put out crime alerts to Ring owners and request that they supply doorbell videos to help solve crimes in the area.

In a blog post on the company’s website, Ring founder Jamie Siminoff stressed that all video sharing with the police is completely voluntary on the part of the homeowner, and that law enforcement agencies do not have access to any live video feeds. The company merely acts as a go-between, sending alerts and requests from police and responding if a homeowner agrees.

But earlier versions of the program have come under fire. Some police departments raised eyebrows when they offered the doorbell cameras to community members, for example, and Ring phased out a previous service that mapped the relative location where their cameras were located, saying it was no longer useful.

Matthew Guariglia, a policy analyst at the Electronic Frontier Foundation, said the program is still troubling.

“What this has done has created a streamlined way for police to request access to essentially a networked CCTV,” Guariglia said.

He argued that programs like Neighbors, and local social-networking platforms like Nextdoor, create a climate of fear.

“When you’re sitting at work all day and your Ring app keeps buzzing every time somebody walks past your door … it’s going to give you the illusion that your house is under siege,” Guariglia said.

Only about half of the dozen Arizona police departments that are in the program responded to a request for comment. But those that did all stressed they cannot get their hands on video without a homeowner’s permission.

Gilbert Police Sgt. Mark Marino said his city’s “residents appear to be appreciative and involved” with the Neighbors app, and that they readily share “videos and other relevant information.”

The Phoenix Police Department was already running a program called Virtual Block Watch – which allows businesses and homeowners with closed-circuit cameras to share video if asked – when it started using Neighbors last winter. The department praised the Ring app’s ability to connect it with the public.

Phoenix police also cautioned, however, against “erroneously accusing others of crimes” as a result of the videos.

Ring’s community guidelines admonish users against racial profiling, but a Washington Post article noted a video from Maryland last Halloween when a Maryland Ring owner questioned whether two young African American boys were “up to no good.” The Post noted that Ring took the video off its platform soon after the story was brought to its attention.

Guariglia said personal biases about what constitutes suspicious activity make Neighbors “a super-highway for racial profiling.” He is also concerned that Amazon, which owns Ring, has access to the doorbell videos.

“The problem with Amazon is it introduces a middleman who, if you read their terms of service, has access to your footage, and has used that footage in promotional material,” Guariglia said.

Dezso understands the worries, but said he sees Neighbors as an extension of the constant video surveillance we live with every day in our society.

“I know there’s concern about that, because it’s a different day and age,” Dezso said, but added that surveillance is something we have to “adapt to.”