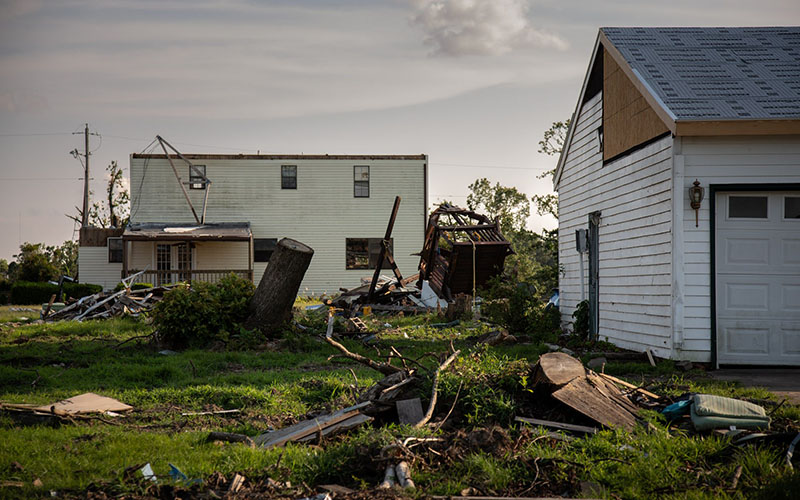 Eight years to the day after an EF5 tornado tore through Joplin, Missouri – killing 161 people and destroying a third of the city’s homes – a twister hit Carl Junction, just north of Joplin, on May 22, 2019. (Photo by Brigette Waltermire/News21)

Angela Ard (left) made stuffed animals for Haley Delgado and her mom, Athena Delgado, from some of Xavier Delgado’s favorite clothes. Xavier, 14, took his own life five years after a 2013 tornado killed seven of his classmates in Moore, Oklahoma. (Photo by Brigette Waltermire/News21)

MOORE, Okla. – After a natural disaster, research shows survivors can have psychological fallouts for weeks, months – even lifetimes.

Xavier Delgado was 10 in May 2013 when an EF5 tornado hit Moore. He nearly was one of the town’s 24 fatalities as the storm, with its 210 mph winds, struck Plaza Towers Elementary School.

Xavier, his abdomen impaled by a spear of debris, spent 40 minutes under rubble before rescuers got to him. His parents, Athena and Simon Delgado, were relieved Xavier was alive — he was even joking with nurses at the hospital.

Xavier seemed emotionally fine. But later, while watching coverage of the storm, he sat on the floor counting on his fingers the number of friends he had lost. Seven.

He stopped doing things he loved, and he was afraid of death, his mother said.

“Your kids are so resilient, they’ll bounce back? No, they don’t,” Athena Delgado said. “Something this dramatic that happens … it follows them forever.”

Four years after the tornado, Xavier took his own life.

The Delgado family – including Xavier’s little sister, Haley, who also was at Plaza Towers Elementary that day – now shares their story of the deadly delayed effects of natural disasters as part of their advocacy for better mental health services in Oklahoma.

The tendency of survivors to minimize mental health impacts of weather disasters – the “we’re all right” mentality – is at odds with the facts, according to Susan Clayton, lead author of a 2017 report for the American Psychological Association titled “Mental Health and Our Changing Climate.”

The report urges local governments to create preparedness plans for psychological recovery, just as they do for physical infrastructure.

“We know that there’s an increase in stress and depression, and suicide is on the rise – we’ve seen in the past these threats associated with natural disasters and major storms, and there seems to be a trend for them to be getting worse,” said Clayton, a professor at the College of Wooster in Ohio, who has been researching climate change and mental health for the past 10 years.

This spring, not even a year after Hurricane Michael hit the Gulf Coast, school officials in Panama City, Florida, asked for extra help at every school, saying more than a third of the students and teachers in the Panhandle district are showing symptoms of clinical depression, post-traumatic stress or anxiety.

Eight years after a tornado destroyed a third of Joplin, Missouri, mental health professionals are reaching out to survivors with the message that they still may need psychological help and should seek it now.

The lingering aftermath of the terrorist attacks on Sept. 11, 2001, called attention to the importance of mental health services, experts say, but it was Hurricane Katrina in 2005 that elevated public awareness of the need for emotional help after natural disasters.

Extensive research revealed that deep and enduring trauma is sustained during and after natural disasters, particularly by children. More than a third of Katrina’s young survivors suffered depression, anxiety and post-traumatic stress, according to the National Institutes for Health.

According to the American Psychological Society, as many as four in 10 survivors can experience a mental or behavioral disorder after a disaster, with children, women and the poor disproportionately affected.

Athena Delgado urged her son, Xavier, to go to therapy, but he didn’t. When his pediatrician assured her that children are resilient, that Xavier would bounce back, she attributed the change to attention-deficit/hyperactivity disorder, or ADHD. Later, another doctor said Xavier most likely had PTSD and survivor’s guilt.

Athena said Xavier stopped roller blading and would not fly on planes because they were unsafe.

“He was scared to death of death,” she said. “He said he’d hate me forever if I made him get help.”

A friend, Lola Ochoa, said she didn’t realize how severely Xavier was struggling. If anyone showed concern, she said, he would just reply “I’m fine.”

“He didn’t want to show that he was hurting because he just wanted to be that fun person,” Lola said.

Simon Delgado said his son was loved by a lot of people. After Xavier’s funeral, the whole family began seeing a therapist, his father said. Simon, Athena and their youngest daughter, Haley, still go regularly.

“Until she turns 18, until she’s out from under my roof, she’ll be in therapy,” Athena said.

When the tornado hit, Haley was a second-grader, huddled in the same hallway as her brother. Something hit her on the head, knocking her unconscious. Her teacher tried to protect her, but the tornado pulled Haley from her arms, dropping the girl 10 yards away.

“She wore gun-range headphones for a while after that because she couldn’t stand the sound of the wind,” Simon said. “Anytime the wind would blow, she would have a panic attack.”

Haley was allowed to skip school on days with severe weather warnings because “school made her not feel safe,” her mother said.

Six months after the May 20, 2013, tornado, Moore Youth and Family Services started Project Moore Hope, a program to provide services, including in schools, to tornado victims, according to Lisa Williams, CEO of the nonprofit.

It’s now been six years for Moore. Williams said the program has seen an increase in school counselors referring kids to therapy, especially when the weather threatens. The second- and third-graders who survived are now entering high school. 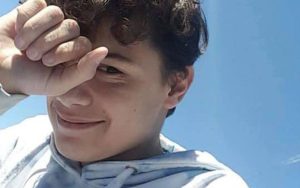 Xavier Delgado took his own life May 6, 2018. His family is warning about the deadly delayed effects of natural disasters and are advocates for better mental health services in Oklahoma. (Photo courtesy of the Delgado family)

A Midwest community heals itself

In 2011, two years before the Moore storm, an EF5 tornado flattened a third of the homes in Joplin, Missouri, killing 161.

As the twister hit Stephen McCullough’s second-story apartment, he grabbed his cellphone so he could call his mother if he survived and stuffed his wallet in his pocket so his body could be identified if he didn’t.

After the tornado passed, McCullough, a mental health service provider at the Ozark Center, ran barefoot down the stairs to help others, cutting himself on shards of glass.

He and others at the Ozark Center realized their city of 50,000 didn’t have enough services to handle trauma on such a high scale. They started training those without mental health backgrounds to help as a part of a program they called Healing Joplin.

Teams visited every house they could. They marked an X on a map over houses that needed another check-in.

“I was skeptical, honestly, because it involved hiring a whole team of people that didn’t have licenses,” said Vicky Mieseler, chief administrative officer of the Ozark Center, a nonprofit that provides mental health services. “As a licensed psychologist, that bothered me a little bit.”

She said the magic was in the connections made. Mieseler remembers the story of “Sweet Potato Guy,” a Healing Joplin employee who became frustrated while helping an elderly woman living in FEMA housing.

“He didn’t feel like he was making a connection,” she said.

The employee eventually asked the woman what would make her smile. Sarcastically, she suggested a sweet potato pie. When he showed up at her door with the pie, the woman invited him in, Mieseler said.

“He quickly learned that she was probably in more serious depression than he had even thought,” she said. Over several conversations, the woman revealed that Sweet Potato Guy – and his pie – stopped her from taking her life.

“She just could not imagine rebuilding her life. He saved her from that,” Mieseler said.

Healing Joplin ended after a year and a half. Then in May 2019, a tornado hit the neighboring communities of Carl Junction and Golden City. The Ozark Center put the lessons learned from Healing Joplin to work again. The program is used by FEMA as a model for smaller communities facing overwhelming mental health needs after natural disasters. 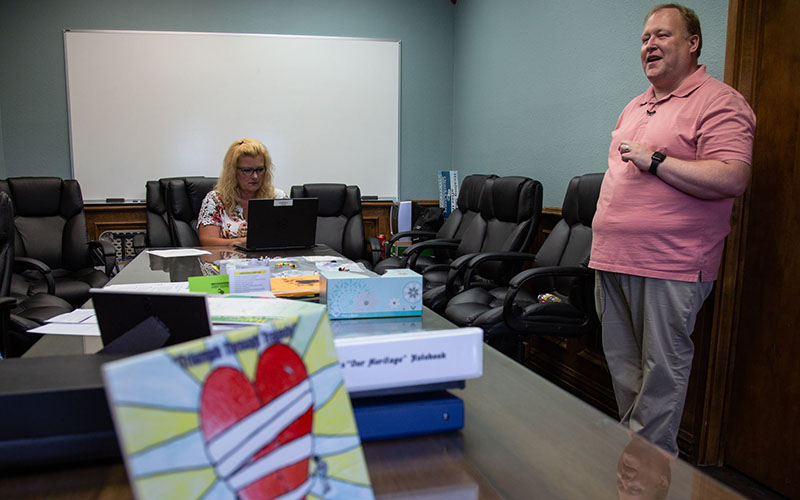 Officials of Bay District Schools in Panama City, Florida, say they need $30 million to avoid a mental health crisis in the aftermath of Hurricane Michael, which hit the Panhandle in October 2018. So far, they’ve received a $1.2 million federal grant, and the hope of more money from a recent disaster relief bill passed by Congress.

“It (mental health) was a piece of what we did, and now it has become a focus of what we do. That’s the difference,” said Sharon Michalik, the school district’s director of communications.

Hundreds of students have been acting out in ways they didn’t before the hurricane, according to a report on mental health needs the district released in May.

Schools reported students talking about wanting to die, attempting suicide on campus, and family members of students dying by suicide in the months after Michael.

If the district can get the money from federal or state agencies, it would be used over the next three years to provide each of the district’s 37 schools with mental health teams.

Since the hurricane, 125 students have been referred to mental health facilities through the Baker Act, the Florida statute that allows involuntary examination of individuals due to signs of mental illness or threats of harm, according to the district’s mental health report.

School officials said that the crisis team responded to an additional 800 incidents that did not require hospitalization.

“Once in a blue moon, a student might need that level of intervention,” Michalik said, “but it wasn’t daily. It wasn’t weekly.”

Mental health experts warn that trauma peaks seven to 10 months after a storm.

“We really saw that, because that’s really where we finished the school year and where we are right now, as people begin to try to grasp that this is the new normal,” Michalik said.

When schools reopened their doors in November, a month after the hurricane, the workbook “After the Storm” was provided to address questions and emotions students might experience.

In Panama City, community mental health partners, operate Project Hope, a prevention-oriented crisis counseling program funded by FEMA. It maintains a presence at recovery centers and community events, and it has access to the schools.

“If you asked me what we really need to address, what we think the depth of the need is, it’s $30 million and a three-year process,” Michalik said. 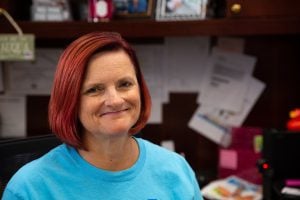 Sharon Michalik, director of communications for Bay District Schools in Panama City, Florida, says hundreds of students have been acting out in ways they didn’t before Hurricane Michael. “It (mental health) was a piece of what we did, and now it has become a focus of what we do. That’s the difference,” she says. (Photo by Stacy Fernández/News21)

But in Oklahoma, the Delgado family and other Moore residents have lobbied at the Oklahoma State Capitol, urging legislators to require a tornado shelter in every school. It didn’t pass this year, but they vow to continue.

They also plan to start a foundation, Speak About Your Doubt, to help pay for mental health bills of those who survived the 2013 tornado. Simon Delgado said he knows Moore’s teenagers still are struggling.

“They struggle, but they struggle in silence. They don’t know how to reach out,” he said.
Xavier’s sister, Marissa, 21, recently had a baby. She named him: “Lincoln Xavier.”

This report is part of State of Emergency, a project on disaster recovery produced by the Carnegie-Knight News21 program. For more stories, visit stateofemergency.news21.com.