Members of a suicide prevention group rallied in March 2018 outside Queen Creek High School, where five students took their lives in less than a year. With teen suicides rising in the state, experts say a $20 million program for school suicide prevention is important – but just a first step. (Photo by Miles Metke/Cronkite News)

WASHINGTON – Officials called a $20 million grant for suicide prevention programs in state schools an important first step to deal with a growing problem, even as they said much more needs to be done.

The Arizona Board of Education on Monday approved a $20 million plan to hire additional counselors, social workers or school resource officers to target suicide prevention at schools across the state.

That money will likely cover the hiring of 200 to 300 additional mental health counselors, once salary, benefits and training costs are factored in, according to an Education Department spokesman. But that’s in a state where the student-to-counselor ratio of 905 to one is currently the worst in the nation.

“Do I think this is going to cure all the ails of the world? Probably not,” said education consultant Katey McPherson. “But it’s a start.”

The money was approved by the legislature this spring and was not scheduled to be allocated until next fall, but Education Department spokesman Stefan Swiat said Gov. Doug Ducey expedited the process to make the money available this year.

In a tweet Monday, Ducey agreed that more steps need to be taken to help public schools cope with the problem.

“This is an important first step but we agree – more needs to be done. We want to see these dollars reach schools as fast as possible,” Ducey said in his tweet.

It comes as suicide rates among adolescents in the U.S. have risen steadily since 2000. In Arizona, 50 teens died by suicide in 2017, up from 38 the year before, according to the Arizona Child Fatality Review.

Under the process approved Monday, schools wanting to take advantage of the funding will have to apply for a grant, making the case for why they need to hire a mental health counselor, social worker or school resource officer.

Grant applications open Sept. 16 and Swiat said the “best-case scenario” is that the Board of Education can allocate funds at its next meeting on Oct. 28, but he is expecting an overwhelming number of applications in the coming months. 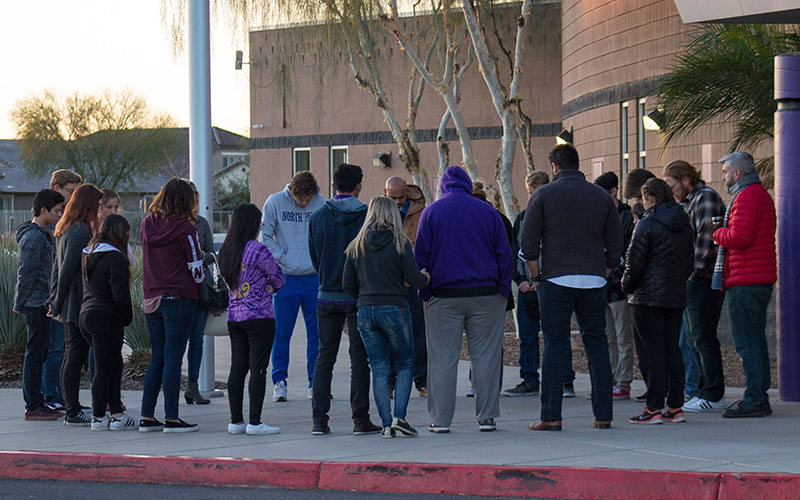 McPherson has viewed the application and said it requires schools to create a new position and hire someone with proper certification – not just repurpose existing staff members to fill these roles, which she said has sometimes happened in the past.

McPherson said the funding and additional positions are only part of the solution: Schools must also “redefine the role of the school counselor.”

She said many counselors report having to work as both a mental health counselor and academic adviser. Planning students’ schedules and orchestrating test preparation takes away from time they could be spending with students in need.

Shiloh Wheeler, a board member for the Arizona School Counselors Association, said the $20 million windfall will give schools the opportunity to hire needed positions in a time when education funding is scarce.

Wheeler works for the Thatcher Unified School District in a rural area in the southeastern part of the state. She was the sole school counselor for the entire district of 1,800 kids for a decade, she said, until a second counselor was hired last year to lighten her load.

She now focuses primarily on high school students and only deals with children in lower grades when crises arise.

Wheeler said that having more eyes and ears on students will allow her to do more preventative work with kids who have social or behavioral issues before they get to high school.

She said her district has discussed applying for the grant to add another counselor and perhaps a school resource officer. In her experience, funding has been a significant roadblock to maintaining an adequate number of counselors.

Swiat said the grant is only for one year, but the department hopes to get renewal of the funding in future years. He called the current counselor-to-student ratio “unacceptable” but said it is “promising to see that this is being addressed in some way, shape or form.”

A law requiring suicide prevention training for teachers in the state also went into effect this week. The legislation mandates two hours of training every three years for Arizona teachers – training includes suicide education and knowledge of warning signs.

Wheeler said this will be a big help for overworked and overwhelmed counselors like her.

“The more eyes and ears on a situation, the better,” she said.