A photo taken from South Mountain shows a dust storm moving across the Valley. (Photo courtesy of Alan Stark/Flickr)

PHOENIX – The monsoon thunderstorms have finally arrived after a delayed start to the season, and with them comes the familiar (or if you’re new in town, terrifying and apocalyptic) dust storms also called haboobs. These fast-moving leviathan walls of dust can quickly transform the streets into a scene ripped from a Mad Max movie, make you regret yesterday’s car wash and may even spread the nasty fungal infection known as Valley fever.

Whether you’re new transplant or a long-time resident of metro Phoenix, you may wonder how haboobs got their name (or vociferously defend calling them dust storms), what causes them or how you can steer clear of their dusty wrath.

Scroll through our guide to get your answers. 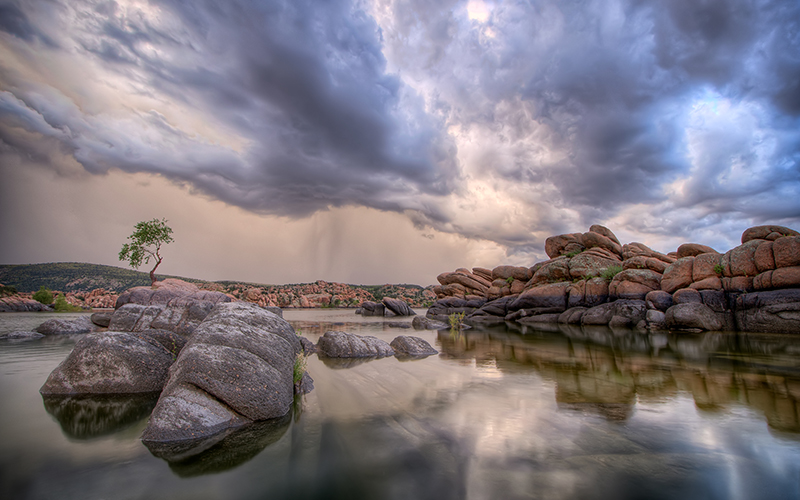 The first step in getting weather akin to Mars is wind and moisture the monsoon season brings. Monsoon, an Arabic word, describes a seasonal shift in wind patterns and not the rains that accompany them. In early summer, winds shift from the west or northwest to a southern origin. Despite colloquial use, “monsoon” refers to this seasonal wind shift, not the thunderstorms that occur when warm, moisture-laden air is brought up from the gulfs of California and Mexico. Once this air hits the higher elevations in Arizona, it cools and brings with it the familiar heavy rains, winds and hail. 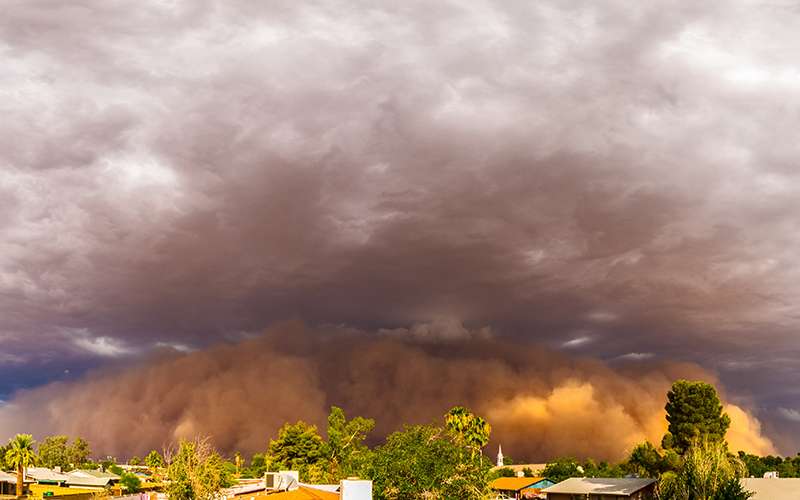 When a thunderstorm begins, cooler, sinking air can create a microburst, which produces winds of up to 100 mph – about the wind speed of an F1 tornado. Once this column of cool air hits the ground, it expands outward in all directions the way water from the tap hits your sink. This is called outflow. The combination of microbursts and outflow kicks up dirt and creates the expanding wall of dust, sometimes half a mile high, seen in a haboob. 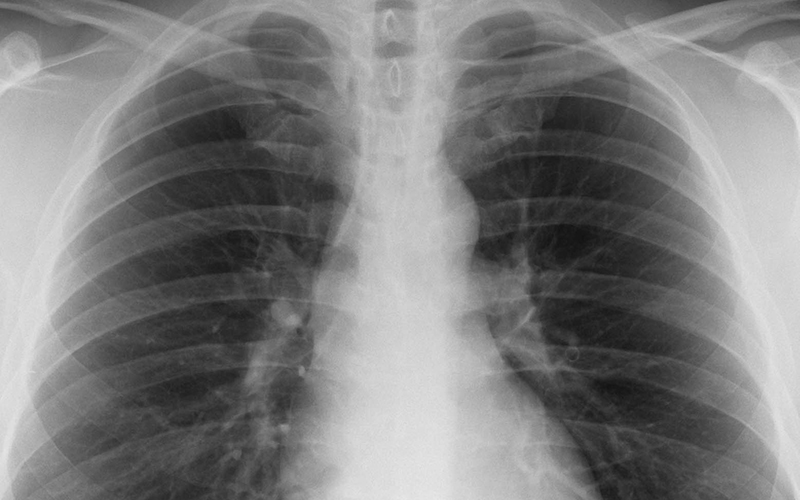 This isn’t a condition of intense love of the Phoenix area. Soil in the Southwest is home to a fungus, Coccidioides, whose spores, when inhaled, cause a malady called coccidioidomycosis. Instead of trying to pronounce this, we call it Valley fever. When the spores colonize the lungs of certain people, the infection causes flu-like symptoms, muscle and joint aches, rashes and shortness of breath. Most people get better within a few weeks, but some need antifungal medication. A small percentage of infections will result in years of lung infections or, in extremely rare cases, neurological damage.

What does this have to do with haboobs? Because the fungus lives in the soil, exposure to dust increases the likelihood you’ll inhale the spores. Although it’s not clear haboobs kick up more spores than does everyday wind and construction or agriculture activity, the thought of a fungus farm in your lungs should dissuade you from breathing any dust if you can avoid it. 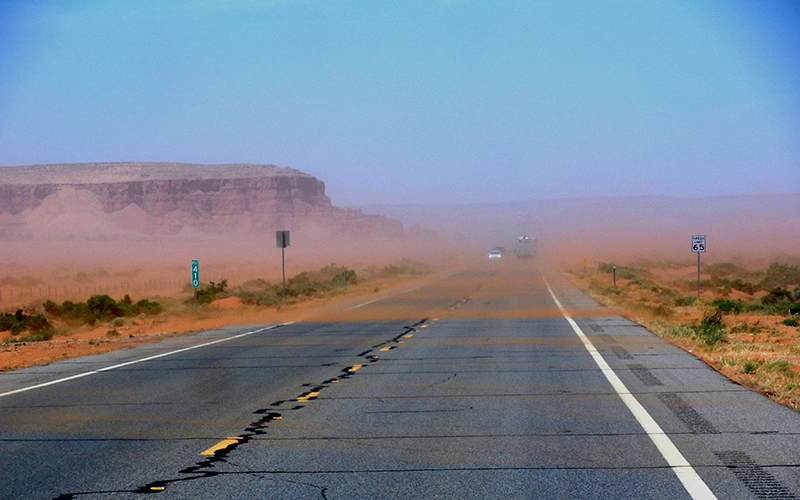 Haboobs, dust storms and dust channels along highways are all dangerous for drivers. The dust can appear with little warning and envelope a roadway instantly, reducing visibility to nearly nothing.

The Arizona Department of Transportation recommends drivers caught in any dusty maelstrom – or preferably before entering it – check their surroundings for other traffic and then pull completely off the road as soon as possible. Keep your seat belt on, turn off your lights, including your emergency flashers, put the car in park and take your foot off the brake. Other drivers, also unable to see, may mistakenly follow your lights, like a moth is attracted to a flame, with catastrophic results.

What’s in a name? 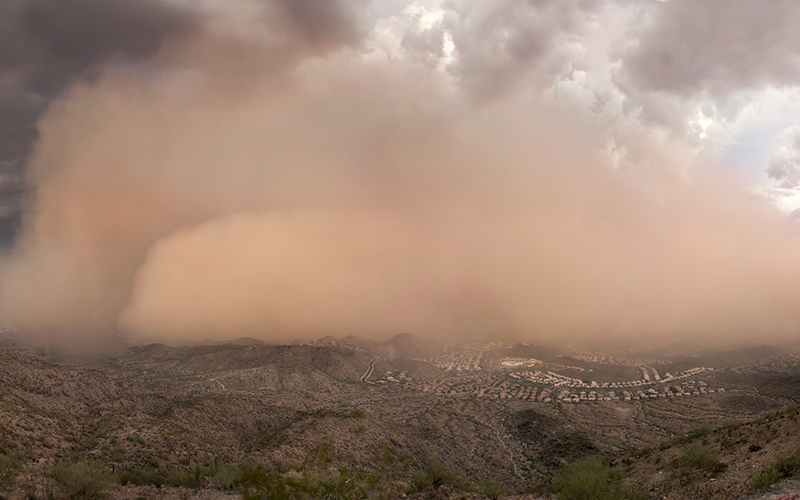 Haboob or dust storm? The term haboob derives from the Arabic language and comes from a weather phenomenon in Sudan, where the capital, Khartoum, is frequently hit by huge walls of dust.

Arizona scientists in the 1970s observed that the Valley’s more intense dust storms bore a strong resemblance to their cousins abroad and began to refer to the local version as haboobs. Not every Valley resident was pleased, however.

Not all dust storms are haboobs, but all haboobs are dust storms. Dust storms can be caused by surface winds, keeping them much lower to the ground, while haboobs are caused by thunderstorm cells, which lift debris high enough in the air to earn the title of haboob.

After a particularly large duster hit Phoenix in 2011, the New York Times reported that national news media usage of haboob stirred up controversy in Arizona. Many locals insisted dust storm was the appropriate nomenclature for Arizona, while haboob should be reserved for the overseas phenomenon. Others defended the appropriate word, comparing it to other Arabic words present in English, such as algebra and coffee. The monsoon pattern that triggers haboobs also derives its name from the Arabic “mausim,” which means season. 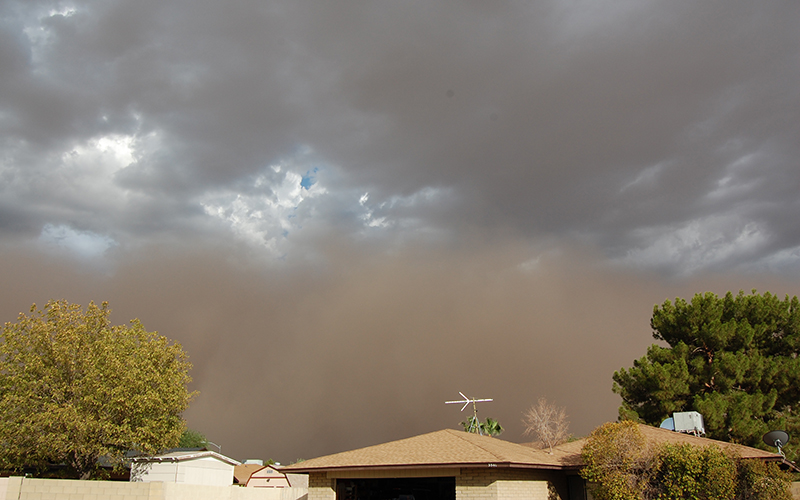 Haboobs are not the only dust formations found in south-central Arizona. Our dry soil conditions, gusty winds and open spaces give birth to other devilish – and sometimes deadly – dust patterns. 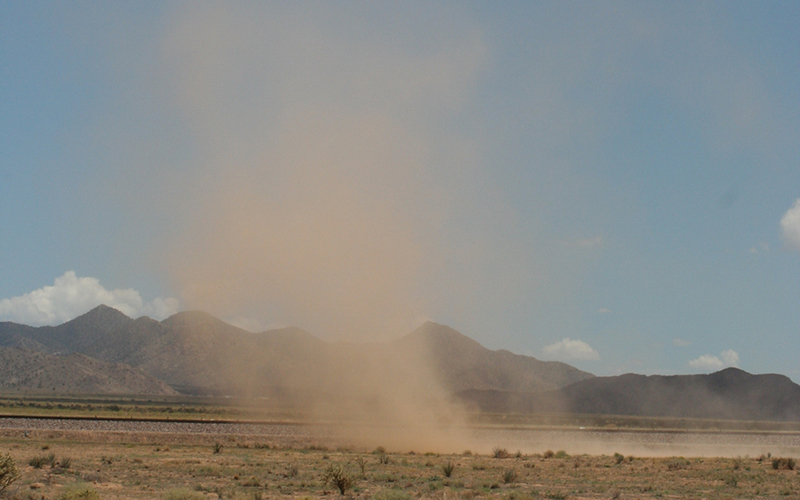 Dust devils are swirling plumes of dust that can resemble miniature tornadoes, with much lower wind speeds. In Arabic, these dust devils are called “djinn,” sharing their name with – and possibly inspiring – the mythical character better known as the genie. It’s not clear whether dust devils grant any wishes, but their typically weak winds and diminished stature means they rarely pose danger to people. Still, avoid driving through one if you can. 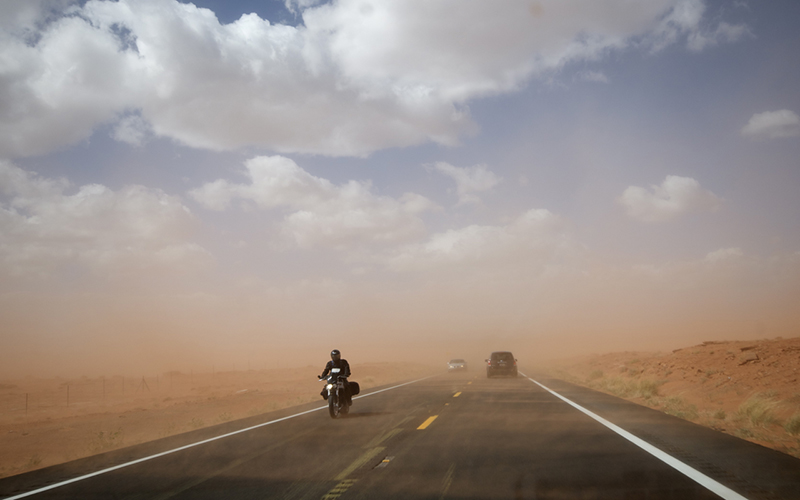 Dust channels, the deadly cousins of haboobs, are localized dust storms that strike suddenly and move quickly. It’s much harder to predict dust channels than haboobs and, as a result, they’re much more dangerous for drivers. ADOT is rolling out sensors along susceptible roadways, such as a particularly dusty stretch of Interstate 10 between Phoenix and Tucson, to better detect dust channels and promptly warn motorists.