PHOENIX – The city has launched its “giving meters” program, repurposing four downtown parking meters to help those who are experiencing homelessness.

The four meters, which have been decorated by local artists, accept donations by coin or credit card to benefit PHX C.A.R.E.S., the city’s homelessness outreach program, which sends trained teams into the community to offer services and resources.

The giving meters provide a convenient way for pedestrians in downtown Phoenix to help those who are homeless.

“We’ve heard a lot from people in our community,” Mayor Kate Gallego said. “They’re concerned. They’re generous. They want to do something to make life easier for people that are experiencing homelessness.” 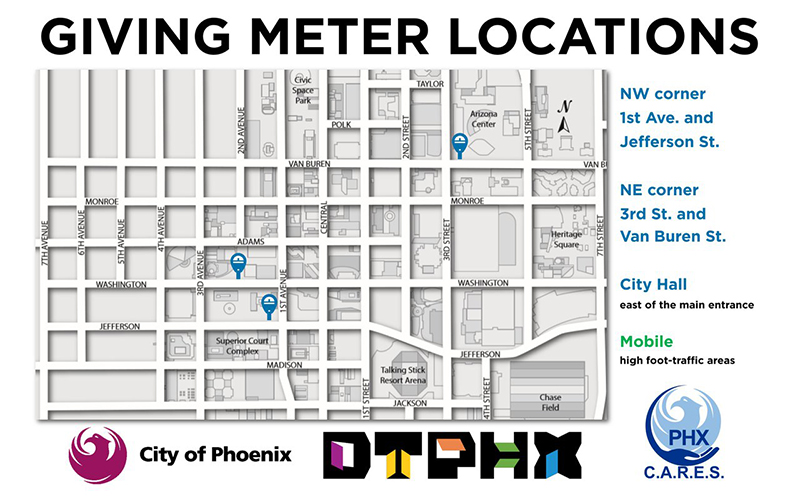 The giving meters will be found in high foot-traffic areas around downtown Phoenix. (Photo courtesy of PHX C.A.R.E.S.)

According to the Maricopa Association of Governments, 6,614 people were considered homeless on the night of Jan. 21. That’s 316 more than were surveyed during the annual Point-in-Time Count in 2018.

The increase marked the sixth consecutive year with a rise in Phoenix’s unsheltered homelessness population, meaning those living on the streets, in cars or other places considered unfit for habitation. 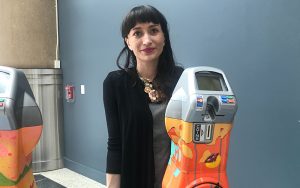 Lydia Quinones was one of four local artists who painted the giving meters. (Photo by Taniyah Williamson/Cronkite News)

Similar initiatives are already in effect in other U.S. cities, including Prescott and Tucson. The meters initiative in Phoenix was led by City Councilwoman Debra Stark of District 3, who got the idea while visiting her cousin in California.

“He goes, ‘Well, it’s to help curb panhandling and help end homelessness,'” she said. “And I thought, ‘Wow, that’s a great idea. Let me bring it back to the city of Phoenix.’ And I did.”

Stationary meters are at City Hall, the Arizona Center and near the Superior Court Complex. A mobile meter will be placed in high foot-traffic areas.

The giving meters double as art pieces, painted by local artists. Lydia Quinones of Phoenix, a Yaqui and Filipino artist, said her work on the meters served as symbolism for better days ahead.

“These harsh conditions in your life – in the end, when you make it to your goal, it just seems all that much richer and sweeter,” she said. “So that’s why I chose the persimmon, and it seemed to just align with the topic.