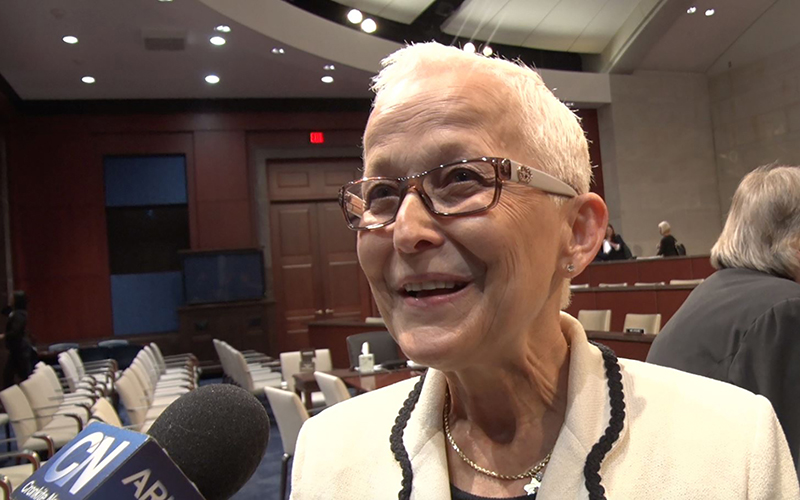 Dr. Teresa Boyd of the Veterans Health Administration told lawmakers that while there’s room for improvement, the agency still provides “the highest quality care, often with shorter wait times than in the private sector.” (Photo by Julian Paras/Cronkite News)

Dr. Teresa Boyd of the Veterans Health Administration said wait-times are down nationwide, in many cases better than times in private practice, even as the system treated 1 million more patients than it did last year.

“VHA has undergone tremendous transformation since 2014,” said Boyd, an assistant deputy undersecretary for clinical operations at the VHA. She told the House Veterans Affairs Committee that the agency is “operating with a renewed focus, unprecedented transparency, and increased accountability.”

While lawmakers generally agreed that things are better than they were in 2014, some cited specific cases of vets who have been turned away from VA clinics when they needed care, and others worried that old problems persist.

“After reviewing our witness testimonies and several articles that have appeared recently in national media, I’m alarmed that too much that … was observed five years ago, still is true today,” said Rep. Mark Takano, D-California, the committee chairman.

“We simply cannot put veterans lives at risk while they wait for care,” Takano said.

It was delayed care that sparked the scandal at the Phoenix VA hospital in 2014. Whistleblowers reported then that workers there were falsifying patient records to make it appear that vets were getting timely care when, in fact, some were waiting for months.

A subsequent VA audit of the Phoenix facility was not able to attribute any deaths directly to delayed care, but it found 28 cases of “clinically significant delays” in care. In one case, hospital staff tried to schedule a primary care visit for a vet who had come to the hospital with a number of problems – but their call came three months after the veteran died of his ailments.

The Phoenix story led to a review of VA facilities across the U.S. that uncovered “nationwide systemic” problems with scheduling and medical care.

In the years that followed, several executives at the Phoenix VA were fired and Congress crafted laws making it easier for the agency to get rid of poor employees and giving veterans greater access to private care outside the system.

Since then, Boyd said, the VA has steadily decreased patient wait time and implemented same-day services for mental health and primary care and community-based outpatient clinics. She pointed to an American Medical Association study in January that found “by 2017, VA had significantly shorter wait times for primary care, cardiology, and dermatology than the wait times seen for private doctors.”

Boyd told the hearing that there is a new agency emphasis on patient service, adding that surveys show the vast majority of vets report being satisfied with their care.

“Last year, the VA completed more than 1 million more appointments than it had the year before,” Roe said Wednesday. “In many cases those appointments occurred faster within VA than it would have in the private sector according to the journal of the American Medical Association.”

But Dr. Kenneth Kizer, chief health-care transformation officer for Atlas Research, said that while monitoring wait time may seem straightforward, it is more complicated than just using electronic wait lists, which often come with many inaccuracies.

“Measuring access to care by only counting face-to-face encounters between the patient and caregiver is anachronistic and does not promote patient-centered care,” Kizer said in his testimony, adding that effectively tracking timeliness needs to balance wait times with patient-reported quality.

Kizer noted that the VA has potential to be a leader in healthcare, and could do so by setting nationwide standards on what it means for care to be timely and quality.

Boyd agreed that the work is not done, but said veterans are getting the care they need.

“We recognize there are still challenges ahead of us, but it is important to keep in mind that veterans continue to receive the highest quality care, often with shorter wait times than in the private sector,” she said.