Narcan nasal spray is used by first-responders to treat individuals who have overdosed on opioids. The goal is to train about 1,200 patrol officers to administer the drug by August. (Photo by Meg Potter/Cronkite News)

PHOENIX – The Police Department is training more first-responders to use a nasal spray that can counter the effects of an opioid overdose, and it hopes to have nearly half of the force’s sworn officers trained by the end of next month.

Although Narcan – a nasal-spray form of naloxone – is used by other Valley police departments, Phoenix has not widely trained its officers or distributed the medicine. Cronkite News reported that as of April, only 100 officers – out of a sworn force of 2,900 – had these kits.

But the department last week trained about 30 more officers at its Maryvale precinct, and it plans to expand training through August with the goal of preparing about 1,200 patrol officers, spokesman Sgt. Tommy Thompson said in an email. The department recently received a grant from the Arizona Department of Health Services for 1,800 units of Narcan, allowing for a wider rollout across the city.

“Right now, we are in the process of providing training and certification to our first-responding officers,” Thompson said after a training last week. “By that I mean the officers who are on patrol, who are the ones out on the street if a call comes down on an individual who might have overdosed or might have experienced a drug-related issue that we believe is opioid or opiate related.”

In 2017, Gov. Doug Ducey declared a public health emergency after Arizona opioid deaths skyrocketed. State officials have logged more than 3,220 suspected opioid deaths from June 2017 to July 11, 2019, according to the state health department.

As part of the emergency declaration, Ducey issued a standing order urging all first-responders to learn how to administer naloxone. Officers at several metro Phoenix police departments, including Avondale, Glendale, Goodyear, Mesa, Scottsdale and Surprise, have access to Narcan and can administer it.

State data shows that nearly 15,000 doses of naloxone have been administered since June 2017.

But Phoenix had limited its opioid-reduction program to specialized divisions, including drug enforcement, K-9, bomb squad, transit and airport bureaus.

“We are the largest law enforcement agency in the state, and we are grateful for that grant,” he said.

“Opiates are naturals, such as heroin or morphine. Opioids are the commercial, synthetic drugs, such as fentanyl or oxycodone,” Thompson added. “Those are the things we see right now in our community. We know that we have a problem with opioid use and abuse.”

Last week, trainers showed officers in the Maryvale precinct how Narcan works. Each officer will carry two cartridges, each holding 4 milligrams of Narcan.

The 1,800 units have an expiration date of 2020, but Thompson isn’t certain how long that supply will last.

“We don’t know how fast we will use it. Certainly we want to be able to use them. We think that we will have extras to give to our people as they use the ones they have to replenish the ones that the individual officers have. That’s what we are looking for,” he said.

Firefighters and EMTs still are considered the primary first-responders. But as police officers at the scene wait, they’ll refer to a procedure card carried by each officer to decide whether to use Narcan. 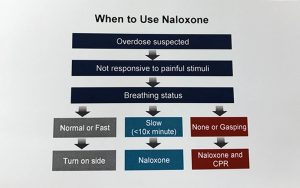 Officers will carry a card with a flowchart explaining when to administer the drug. (Photo by Sebastian Emanuel/Cronkite News)

“If the algorithm says that we need to administer the naloxone, we will do so,” Thompson said. “We give them the first dosage, and after three to four minutes if that’s not working and the Fire Department has not arrived, then we give them the second. It’s not just naloxone. It’s providing first aid that is necessary for those individuals.”

“On the back of the card, it shows the indications of a person suffering from an overdose,” police Sgt. David Jordan said. “That gives the officers an idea of what they are looking for, and then they flip to the opposite side, and it has the algorithm on it once they determine the person is dealing with an overdose.”

After the officers have used both doses of naloxone, Jordan said, they will perform CPR until the firefighters arrive.