PHOENIX – Arizona summers are brutal, especially for those facing homelessness.

Every summer, a coalition of organizations known as the Heat Relief Network provides hydration stations, refuge locations and water donation sites across metro Phoenix to prevent heat-related deaths among vulnerable populations, according to MAG, the Maricopa Association of Governments, which coordinates the network.

Last year, there were 181 heat-associated deaths reported in Maricopa County, according to MAG. Seventy-five percent occurred outdoors, and July and August were especially deadly, the association said. 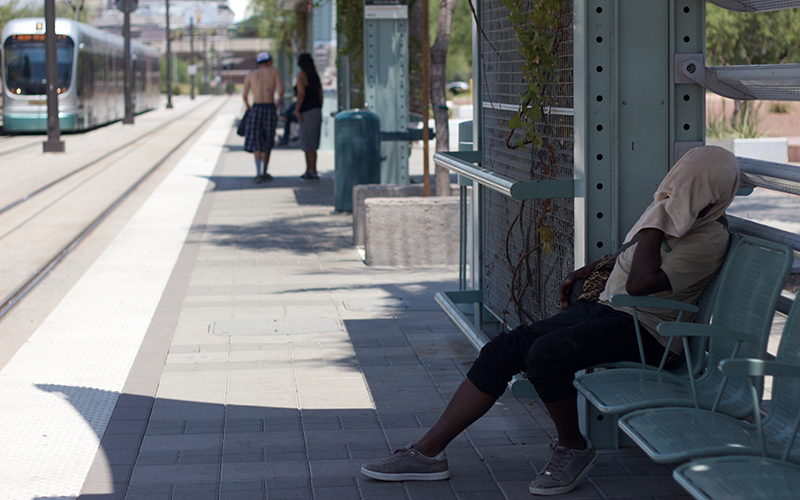 “We’re just there for people if they need to get out … we’re available,” said Bobby Plattner, the downtown dining-room supervisor at St. Vincent DePaul, a nonprofit that feeds and houses the needy.

Plattner said the organization hands out as many as 10,000 bottles of water a week. He keeps extra water during the summer months just in case someone needs a cool drink.

Richard Cruz said he relies on the organization for help.

“It’s outrageous, scorching heat, but there’s always something that’ll be open like this where you can cool off and drink water,” Cruz said. “So I’m thankful for that.”

More than 6,200 people were homeless in Maricopa County during the annual Point-in-Time count in January 2018, MAG said. Of those, more than 2,600 were not in shelters.

The Heat Relief Network launched in 2005 after a weeklong heat wave caused about 30 deaths in the homeless population, according to MAG.

The Department of Economic Security warns that when temperatures don’t drop low enough at night, the homeless population is particularly vulnerable because people can’t adequately cool off.

“Park benches, pavement, sidewalks. Those can get to be a 160 to 170 degrees,” said Kevin Foster, director of burn services at the Arizona Burn Center. “And all it takes is a second of exposure and you can a second or third-degree burn.

The association has tips to avoid heat-related illness.
● Increase fluid intake regardless of activity level.
● Limit exercise or outdoor activity between 11 a.m. and 3 p.m.
● Never leave infants, children or pets inside parked vehicles.
● When outdoors, wear a sunscreen with a minimum SPF 15, and reapply it often. Wear a hat, lightweight clothing and sunglasses.
● Rest frequently in shady or cool areas to give your body temperature the chance to lower.
● Check on elderly neighbors to make sure they have working air-conditioning. Take advantage of free air-conditioning at shopping malls or libraries.