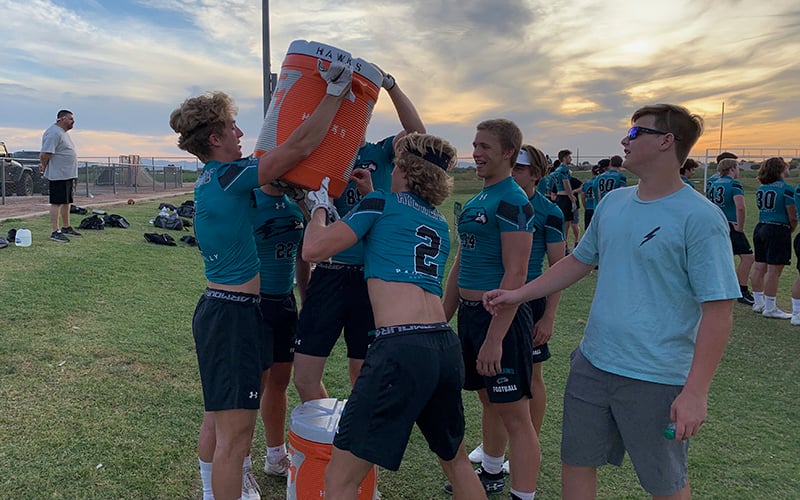 Highland players help teammates get cold water from a jug. Just because the players have been drinking water beforehand doesn’t mean they should stop hydrating during competition. (Photo by Brian Brindley/Cronkite News) 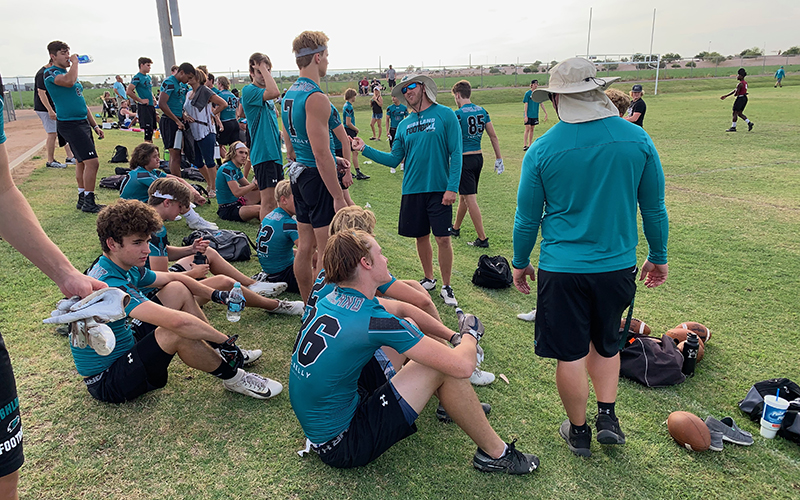 Between games, Highland players sit and relax and cool off a bit. This is the time that coaches and athletic trainers can really see whether a player just needs a breather or should seek medical attention. (Photo by Brian Brindley/Cronkite News)

GILBERT – School is done for the summer, but high school football players are sweating it out to prepare for fall games. And that can put their lives at risk in Arizona’s sweltering heat.

On a recent afternoon in June at Gilbert’s Campo Verde High School, more than 100 students from around Phoenix are taking part in a 7-on-7 passing tournament in which quarterbacks, receivers and defensive backs employ various offensive and defensive schemes.

They’re competing against two things: the man across from them and the relentless sun.

Arizona summers are infamous and practices continue throughout them. The average high temperature in July 2018 was 107.5 degrees. Imagine how it feels to run 100-yard sprints multiple days a week.

The Arizona Interscholastic Association stepped up its efforts last August to address heat illness and help prevent athletes from paying the ultimate price. Its Sports Medicine Advisory Committee is tasked with finding ways to avoid incidents.

The AIA outlines the first two weeks of practices for athletes, specifically football players. The days progress from no contact and only helmets, to full pads and full contact.

Getting used to the heat

David Hayward, a certified athletic trainer working at Highland High School in Gilbert and a member of the Sports Medicine Advisory Committee’s board, said there’s a reason these first weeks of practice have very specific restrictions.

But before that process begins, the players train in the summer. 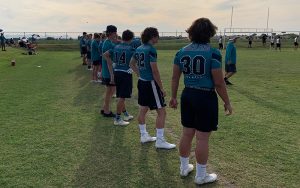 Highland players watch their teammates compete in a passing tournament at Campo Verde High School in June. Players also have some responsibility to keep an eye on teammates who may be reacting poorly to the heat. (Photo by Brian Brindley/Cronkite News)

Brock Farrel, Highland High football coach, is extra cautious during this time to avoid risk for his players. Hydration is critical, especially before they participate because “if they show up thirsty, it’s already too late,” he said. “They should all show up having to pee, you know what I mean?”

Unlike a sprained ankle, for example, a trainer can’t always immediately notice a player fighting through dehydration or heat exhaustion. That’s because these athletes are purposely pushing their limits, so they all look sweaty and exhausted, similar to how they would look if they were in danger.

“The coach has to take care of the player and tell the player you’re not playing right now … you look a little dehydrated … and I’m telling you, you can’t play,” said Robert Newcombe, who coaches football at Casteel High School in Queen Creek.

Hayward said a big part of his job as an athletic trainer is “educating (athletes) about the signs of symptoms and not trying to push through those signs of symptoms.” He said that it’s important for the players to understand that if they push themselves too hard, they may find themselves in serious medical danger.

There’s also a lack of data, Hayward said, to help coaches decide whether it’s safe outside for athletes to compete.

Wet Bulb Globe Temperature, or WBGT, is one tool to help with that. It measures temperature, radiant heat, humidity and wind, which helps coaches and trainers determine whether it’s too dangerous to be outside. But this tool needs further study, Hayward and others said.

The Korey Stringer Institute at the University of Connecticut was named for a Minnesota Vikings football player who died of exertional heat stroke in 2001.

On its website, the institute has an entire page dedicated to WBGT, but Hayward said the issue is that “they have a lot of data that supports the East, the Southeast, we could say, or even the middle of the country. … They haven’t done a lot of research on us (in the Southwest), and we are significantly different in that we have very high temperatures, very high radiant heat but not very high humidity.”

WBGT is used by other organizations, such as the Occupational Safety and Health Administration and the U.S. military, to determine the probability of danger when working outside during the hottest times of the year.

The Sports Medicine Advisory Committee recently pushed to gather more data on WBGT that it can show to coaches and athletic trainers in the future to help combat heat illness.

Hayward said this information could help him and his fellow athletic trainers in high schools fulfill their most important duty.

With Phoenix and Tucson being two of the fastest warming cities in the U.S., it’s a challenge that isn’t going away, Hayward said.