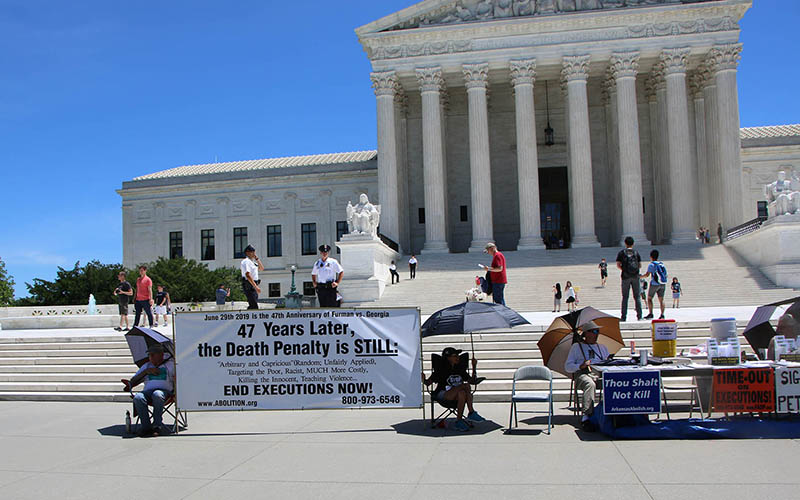 Death penalty opponents demonstrated this week outside the Supreme Court, which is scheduled to hear an appeal in an Arizona capital case that advocates say could affect as many as 19 other inmates on the state’s death row. (Photo by Miranda Faulkner/Cronkite News)

WASHINGTON – There is no question that James McKinney murdered Christine Mertens and James McClain in two separate botched burglaries in the Phoenix area in 1991.

But should he be put to death for it?

That’s the question the Supreme Court will consider this fall, and experts say its ruling in McKinney’s case could affect as many as 19 other Arizona death-row inmates who were sentenced under the same guidelines as McKinney.

“The Arizona state courts in the 1990s were making the same mistake in a whole bunch of cases, which is they weren’t considering the mitigation the way they were supposed to,” said David Euchner, a Pima County public defender.

McKinney’s attorneys argue that the mistake in his case was a failure to fully consider “mitigating evidence” – evidence that weighs against imposition of a death sentence – of the post-traumatic stress disorder McKinney suffered as a result of a “horrific childhood.”

They also argue that from the time McKinney’s original sentence was upheld in 1996 to the last time it was upheld by the Arizona Supreme Court, in 2018, the law had changed.

The U.S. Supreme Court ruled in 2002 that the death penalty could only be imposed by a jury, not a judge, which means McKinney’s sentence should have been reconsidered by a jury, not the court, they argue. The state disagreed, saying McKinney’s case was final after his first round of appeals failed in 1996.

Attorneys for McKinney did not respond to requests for comment on the case. But a spokeswoman for Arizona Attorney General Mark Brnovich said the state supreme court acted properly when it upheld McKinney’s sentence last year.

“We believe the Arizona Supreme Court previously addressed the Ninth Circuit’s (Court of Appeals) concerns and therefore there is no need for the U.S. Supreme Court to get involved at this stage,” said Katie Conner, the attorney general’s spokeswoman.

James McKinney has been on Arizona’s death row since 1993 for two murders committed during burglaries in 1991, but the Supreme Court has agreed to hear an appeal of his sentence this fall. (Photo courtesy Arizona Department of Corrections)

“That being said, we feel confident in our arguments and believe we will ultimately prevail at the federal level as well,” Conner said in a prepared statement.

McKinney and his half-brother Charles Hedlund were convicted for a string of burglaries in 1991 that ended with the murders of Mertens and McClain.

McKinney, Hedlund and two others first broke into Mertens house on Feb. 28, 1991, but left when she came home unexpectedly. They returned on March 10, this time finding Mertens at home, where they brutally beat and stabbed, then held her on the floor and shot her in the back of the head at point-blank range.

Nearly two weeks later, McKinney and Hedlund broke into McClain’s home, where he was asleep on March 23 when the two men broke in and fatally shot the 65-year-old in the head with a sawed-off rifle.

In July 1993, both were sentenced to death by a Maricopa County judge, who cited aggravating factors of previous convictions and crimes committed for monetary gain and, in McKinney’s case, that the murder was “especially heinous, cruel or depraved.”

The judge considered mitigating circumstances of their childhoods – in which they were frequently beaten, abandoned and neglected – saying it was “beyond the comprehension of most people.” But he did not weigh it because, under Arizona law at the time, evidence of a defendant’s background could only be considered if it had a “causal nexus,” or direct link to the crime. The judge determined it did not.

The 9th U.S. Circuit Court of Appeals ruled in McKinney’s case in 2015 that Arizona courts had erroneously applied a “causal nexus” test for as long as 15 years after the U.S. Supreme Court rejected the practice in a case known as Eddings.

“They didn’t consider all of his mitigating factors unless it had a causal nexus to the crime and that was wrong,” Euchner said. “They did it to a bunch of cases back in the ’90s.”

Among the 19 cases that McKinney’s attorneys listed in his appeal are inmates who have spent decades on death row, many found to have aggravating circumstances that included “especially heinous, cruel or depraved” murders.

They include Alfonso Salazar, on death row for more than 30 years for the murder of 83-year-old Sarah Kaplan, who was beaten and strangled with a phone cord. And Robert Poyson, sentenced in 1988 for a triple-murder in which he bludgeoned one victim with a cinderblock, shot another and pounded a bread knife through the ear of a 15-year-old victim before crushing his skull, according to court records. 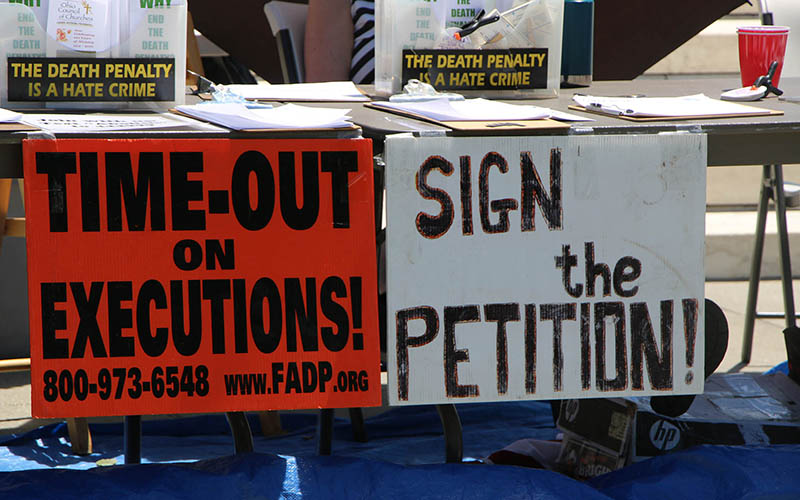 Death penalty opponents outside the Supreme Court represented groups from a number of states, but not from Arizona, which has 116 inmates on death row. (Photo by Miranda Faulkner/Cronkite News)

Donna Leone Hamm of Tempe-based Middle Ground Prison Reform said there is a lot more known about the effects of PTSD than there used to be, but “there are still lingering doubts about the authenticity of the claim.”

“Just how real did the condition contribute to the crime and I think that’s where it no longer relies on science but it relies on the gut feeling and the hearts and minds of the judges,” she said.

“You have to look at what else the defendant do during the offense that suggests that he was not suffering,” she said. “Was his state of mind 100% in a PTSD mode, or was he doing things that showed a consciousness of guilt and premeditation?”

Euchner said the 9th Circuit’s ruling had the effect of reopening McKinney’s case and giving him “the right to question what set of rules that apply” to his resentencing – those in effect in 1996 or those in effect now.

“In McKinney’s case, and many others like McKinney, it’s not just that they were denied a jury trial but they’re getting their case reopened – so it becomes unfinal,” Euchner said.

“The question that the U.S. Supreme Court is deciding is if McKinney’s appeal was final or not final – and if it’s not final he will get a jury trial,” Euchner said. “So all the other cases that have been reopened for the errors made by the Arizona courts in the ’90s about mitigating circumstances will also be awaiting the opinion to see if they also get jury trials.”

But Hamm cautioned that the court could write a “very narrow” opinion that applies only to McKinney and not the others, “so you just don’t know until you see how the opinion is written.” Even then, she said, it’s not a sure thing for McKinney.

“I don’t think that anyone is very confident that this Supreme Court has great sympathy toward prisoner rights, especially when they become aware that it could result in overturning convictions on not just his case but many others, even in other states,” she said. “It’s worrisome – you have to hope that they will consider fairly the facts of the case.”

Euchner said he is hoping for a broad and favorable ruling, saying it’s “more than just McKinney’s case … we really need this.”