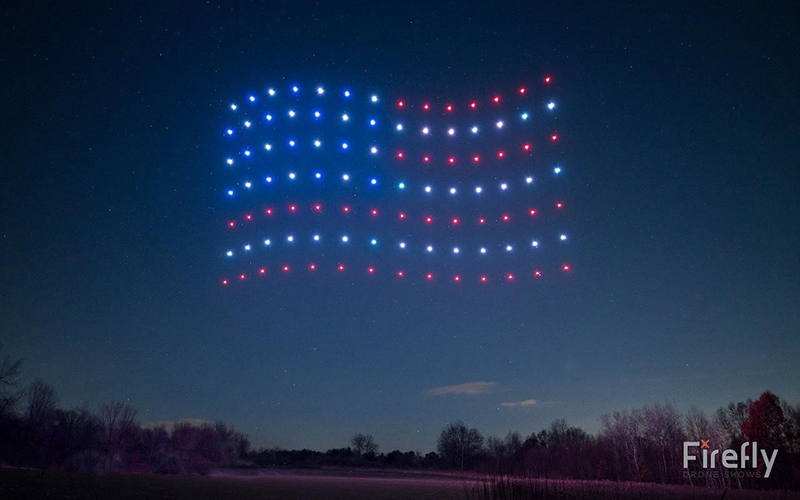 PHOENIX – For some metro Phoenix residents, the steady drumbeat of Fourth of July fireworks will be replaced with the high-pitched whine of electric motors as hundreds of drones take to the sky.

For the second Fourth in a row, Carefree is sponsoring a swarm of drones bearing LED lights in lieu of a more traditional fireworks display. The display will be at CIVANA, which is a spa and resort in Carefree.

There are several reasons to rely on drones, not the least of which is the risk of fire.

“We wouldn’t be able to do fireworks up in the dry desert like it is now,” Mayor Les Peterson said. “We’re in the throes of year 20 of what could be a 30- to 50-year drought. So there’s no prospect, literally, of us being able to utilize fireworks in the foreseeable future.”

But that’s not the only local consideration driving interest in drone shows.

“Up in (the) Carefree, Cave Creek, north Scottsdale area, a lot of people have horses, dogs, et cetera, and fireworks scares a lot of the animals,” Peterson said. “We’ll have people call us and say, ‘Our horses broke out, they were so spooked by fireworks.’

“Another one is veterans. We’ve had veterans groups call us and say, ‘For someone with PTSD who’s been in a battlefield situation, the fireworks brings back all kinds of memories.'”

Although the drone show is more expensive that traditional pyrotechnics, the mayor said, “they are immensely safer, and both easier on the environment and easier on animals.”

Firefly Drone Shows of Detroit is putting on CIVANA’s Fourth of July show. Ryan Sigmon, the company’s co-founder, said drone shows are the future, but not just because they can go where fireworks can’t. Drone displays are more customizable than fireworks, he said.

“A lot of our clients love to do different formations or designs that fit their brand or their story that they’re trying to tell in the sky,” Sigmon said. “It’s tough to compare it directly to fireworks because it’s such a different experience.”

The cost of a drone show depends on the production’s size, which can vary from 100 to 300 drones. Sigmon wouldn’t give an exact cost but he said the price increases based on the level of customization.

“When we launched the company, our goal was never to revolutionize fireworks or compete against fireworks,” he said. “We definitely saw that there were some environmental aspects to what we did that were a bonus, especially where it comes to places like Arizona.”

Sigmon said the drone shows are a new form of media, “a new form of nightime entertainment that has so much creative freedom… that really inspired us and motivated us to work towards this dream.”