The free three-day workshop in late June aimed to provide new classroom resources and tools to about 20 K-12 teachers through presentations, artist demonstrations, gallery tours and more. One of those demonstrations focused on weaving, a tradition that runs deep in many tribes, including the Navajo.

Filmmaker and weaver Velma Kee Craig was among the presenters at the Heard. She wants to share the weaving tradition of her Navajo culture with others.

“It’s given me a way to give back to my community, you know, and tie other students like myself to their culture in a way that maybe they thought that they couldn’t have in the past,” said Craig, who lives in Mesa.

Craig, 42, grew up on the Navajo Reservation, but it wasn’t until later in life that she wanted to learn more about her history and culture. She completed a minor in American Indian studies at Arizona State University and, at age 33, learned to weave in a workshop, much like those she leads now.

K-12 teachers from around Arizona listen as artist and weaver Velma Craig tells her story about growing up on the Navajo Reservation and eventually learning about her tribe’s traditions, including textile weaving. (Photo by Amanda Slee/Cronkite News)

The museum’s director of education, Sharah Nieto, said the institute’s goal is to focus on the past and the present.

“Sometimes we just teach about them (Native Americans) in the past and don’t talk about them as people today,” Nieto said. “We don’t understand their rights, their sovereignty, and I encourage people to go out there and learn about the Native people in their community because this is all Native land.”

The institute works to eliminate misconceptions about Native Americans in Arizona’s history. Tours through exhibitions included the Heard Museum’s updated installation on Indian boarding schools, which the federal government started in the 1870s to assimilate Native children into the ways of white European society and train them for jobs. The Phoenix Indian Industrial School operated from 1891 to 1990.

Nieto said a change of environment was important for the teachers.

“Being at the facility is really important to get them out of the classrooms, out of their communities, into a different space,” she said.

A field trip to the Phoenix Indian School Visitor Center offered another change of perspective. Nieto said she overheard participants’ surprise when they learned that Steele Indian School Park was named for the boarding school that operated there for nearly a century.

Duane Yazzie, who teaches physical education to grades K-6 at Tséhootsooí Diné Bi’Ólta’ School on the Navajo Reservation, said he noticed parallels between the Holocaust, the boarding schools and what’s currently happening on the U.S.-Mexico border. 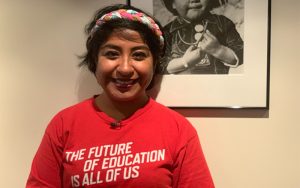 Lizeth Herrera, who teaches at Isaac E. Imes School in Glendale, says she feels she now has responsibility to spread what she has learned about Native American history and culture to her students and colleagues. (Photo by Amanda Slee/Cronkite News)

He wants to integrate what he learned during the workshop in the future by bringing in different perspectives beyond “what’s presented in a textbook, or a certain curriculum.”

“Weaving those things multidimensionally so that we come away with something that’s more impactful and more authentic,” Yazzie said.

Lizeth Herrera of Isaac E. Imes School in Glendale said the program will strengthen her attempts to teach in a way that helps students see themselves in their learning.

“If you see yourself in what you’re learning, you take it more into your heart and I think that’s where the real learning really happens,” Herrera said.

For Craig and other guest speakers, this workshop was a chance to share their stories.

“I wasn’t proud of the story I was being told,” Craig said. “So I think that’s something that I’m hoping to be a part of changing.”

Tanner Puckett contributed to this story.