In a hallway leading to “Away From Home,” a panorama depicts the history of American Indian boarding schools across the country. (Photo by Julian Hernandez/Cronkite News)

A haircut was one of the first things new students experienced upon arrival at boarding school. It was a way the schools attempted to eradicate the students’ culture and connection to their heritage. (Photo by Julian Hernandez/Cronkite News)

PHOENIX – As visitors enter the Heard Museum exhibit “Away From Home: American Indian Boarding School Stories,” they encounter an eye-level digital screen with a grid display of hundreds of school portraits of indigenous students who attended scores of such boarding schools across the United States. 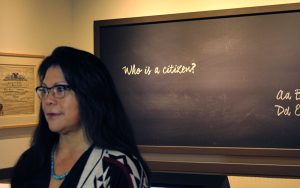 Patty Talahongva, an award-winning freelance journalist who attended Phoenix Indian School in the 1978-79 school year, served as an advisory committee member to the new “Away From Home” exhibit at the Heard Museum. (Photo by Julian Hernandez/Cronkite News)

Some of the portraits were taken during the late 19th and early 20th centuries. They’re black and white, sometimes sepia-toned, and often are faded near the edges. Others are more contemporary color portraits with hairstyles and clothing that hint at the decade in which the photo was taken.

There are smiles and stern faces, long and short hair, gold and pink graduation caps and gowns.

As each individual portrait transitions to another, visitors get a sense of scale for the number of Native American students who attended the boarding schools – many of them against their wishes – over 140 years.

For Patty Talahongva, a member of the Hopi Tribe and one of the advisers who assisted in the curation and development of the exhibit, seeing those faces brought her joy. She attended Phoenix Indian School during the 1978-79 school year.

The exhibition is a renovation of the popular “Remembering Our Indian School Days: The Boarding School Experience,” which opened in November 2000, said Janet Cantley, the project manager and curator of “Away From Home.”

Cantley said an update was needed.

“There’s been a lot of research, a lot of writing and a lot of exploration of the need to heal because of the impact (of boarding schools) on the Native community,” she said, adding that Heard officials also wanted to include more personal stories to the exhibit.

Bryan Brayboy, a professor of indigenous education and justice at Arizona State University and a member of the Lumbee Tribe of North Carolina, saw the original “Remembering Our Indian School Days” exhibit many times. He said that exhibit helped indigenous youth better connect with the impact the boarding schools have had on their communities.

“Boarding schools have a profound impact on people, communities and on children,” Brayboy said. “Generations tend to carry those things around. It’s part of the history that we grow up knowing about what schooling was like for our ancestors. So part of what the exhibit does for us is really help pull that apart, allow us to connect with it emotionally, but also better understand the circumstances around it.”

Although “Remembering Our Indian School Days” reached the communities whose stories were being told, Cantley said, many Americans simply aren’t aware of the history of Indian boarding schools in the United States and around the world.

“People drive up and down Indian School Road in Phoenix every day and don’t know the association with Phoenix Indian School, which has a 99-year history in Phoenix,” she said.

Talahongva said, “People hadn’t heard about the boarding schools. We don’t teach American Indian history in any of our schools at any decent level, so it’s not a surprise that the public didn’t know about these boarding schools.”

To help those who aren’t as familiar with the history of boarding schools explore the topic more easily, some new features were designed and installed.

“We’ve added new art and new interactives, a touch-screen map where people can find more in-depth information on some of the schools,” Cantley said. “We have timelines, so a lot of ability to do in-depth dives into information on American Indian education and federal policy.”

For Brayboy, it was equally important for the new exhibit to maintain a balance.

“It isn’t just focusing on trauma, but also focusing on the ways in which there were some positive aspects to the school. Positive relationships that came out of it,” he said.

“If you talk to individuals that were at the Indian school here in Phoenix, many of them met their spouses there, met friends they are still friends with. They still spend time together, they talk about old stories. And there are moments of trauma in there, but there’s also moments – and I think this is really important when we think about Native people – there’s also moments of really great humor.”

Talahongva said a great deal of historical trauma from the boarding school experience remains, and many indigenous communities are still living with it. But she also said, “It’s all positive. I think the big misconception is that everything was bad. It wasn’t.”

Talahongva said there was no high school on the Hopi Reservation in 1978 and there weren’t many other options.

“So I came to Phoenix Indian and I became a P.I. Brave,” Talahongva said, invoking the school’s mascot.

As she said it, she smiled and raised her right fist in solidarity with the hundreds of children who, just like her, attended Phoenix Indian School.