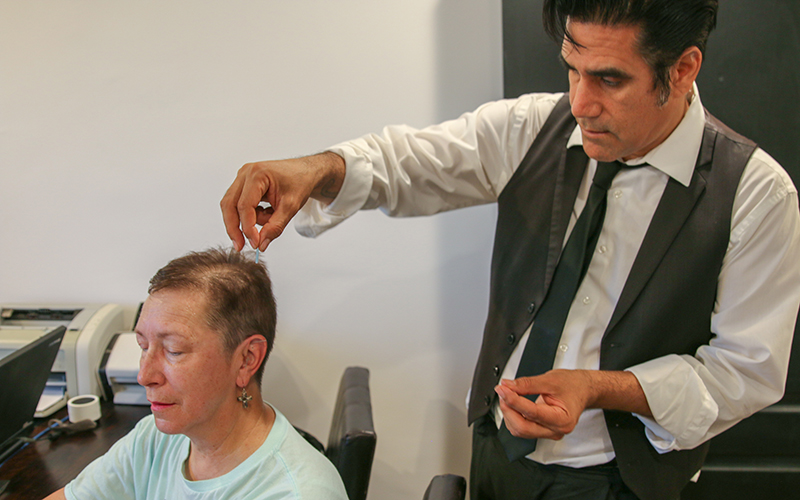 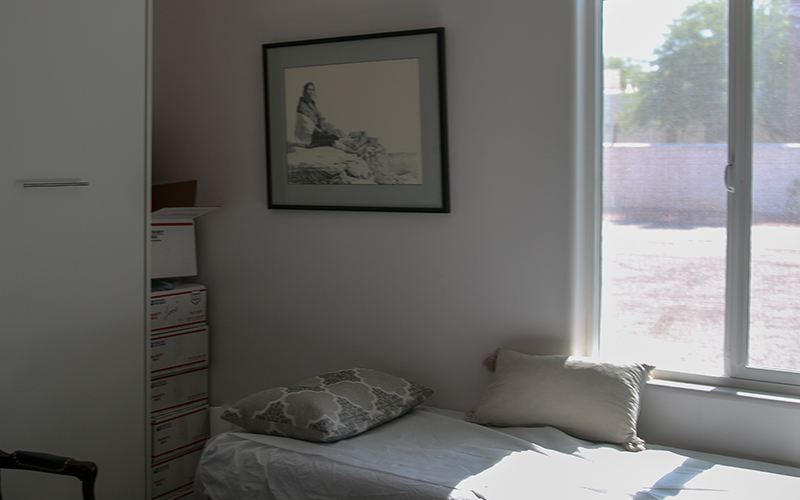 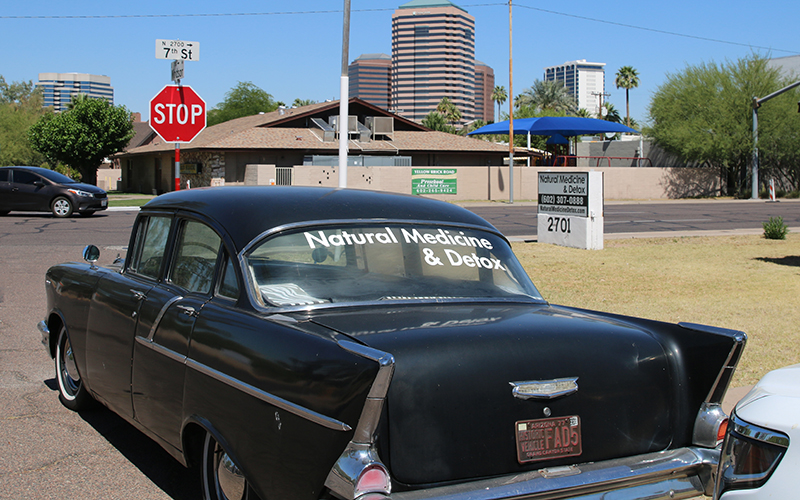 Natural Medicine & Detox was the first clinic to be approved by the State of Arizona Acupuncture Board of Examiners as a chemical dependency program. Since then, Decision Point and Stuck Community Acupuncture have been added. (Photo by Tim Royan/Cronkite News)

PHOENIX – The State of Arizona Acupuncture Board of Examiners has entered the fight against opioid abuse, approving chemical dependency programs for a form of acupuncture that involves the outer ear. Supporters say auricular acupuncture helps people break free of addiction, but a skeptic says there’s zero evidence acupuncture relieves any condition.

“I don’t think (auricular acupuncture is) the complete answer, but I think it can really help change the tide,” said Dr. Mario Fontes, clinic director of Natural Medicine & Detox in central Phoenix, which offers a board-approved chemical dependency program. 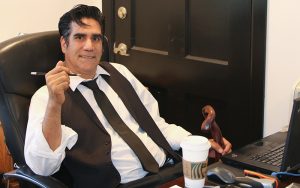 Dr. Mario Fontes says he initially became involved with the Arizona acupuncture board to help “to reduce red tape for people to help people.” (Photo by Tim Royan/Cronkite News)

Opioids in Arizona have killed more than 3,000 people in the past two years alone, and more than 21,000 suspected overdoses have occurred over the same time, according to data from the Arizona Department of Health Services.

First developed by French physician Paul Nogier in the 1950s, auricular acupuncture, also known as acu-detox, uses needles placed in one to five acupuncture points in the outer ear. Proponents say the practice offers a non-pharmacological approach to managing a range of issues, from pain to stress to post traumatic stress disorder to opiate withdrawals.

The acupuncture board has made efforts to make it easier for auricular acupuncturists to gain certification for the past few years to help address the opioid crisis, said the board’s executive director, David Geriminski.

“We are hoping that by providing chemical dependency programs, auricular acupuncture will become more accessible to more people and more parts of the state, especially in rural areas,” he said.

The current statute for the program, approved in March last year, allows certified auricular acupuncturists to apply to operate in approved chemical dependency programs under the supervision of a licensed acupuncturist, Geriminski said.

Auricular acupuncturists, who are certified to perform acupuncture for the purpose of chemical dependency and substance abuse treatment, are required to take a training course through the National Acupuncture Detoxification Association, in addition to a course in clean needling technique.

They also must be reviewed by the board and fingerprinted. They then are certified to perform acupuncture only on the five points in the ear for the purpose of treatment, Geriminski said.

Meanwhile, fully licensed acupuncturists are required to complete what is essentially a master’s degree program, consisting of 1,850 hours of training, of which 800 hours must be practiced in a clinical setting, Geriminski said.

Fontes, who also is a member of the State of Arizona Acupuncture Board of Examiners, said this rigorous licensing process is there to protect the public. His clinic was the first to be approved by the board; since then, two more have been approved as chemical dependency programs.

Fontes said auricular acupuncture is a powerful tool in all stages of opiate dependency, and he criticized the medical establishment for its role in the opiate crisis.

“A lot of addictions starts with the prescription pad at the doctor’s office,” Fontes said. “You have somebody who comes with a legitimate medical complaint and are prescribed an addictive substance. There are non-pharmacological approaches to pain management.”

For Fontes, acupuncture also can assist existing addictions by shifting a person suffering from withdrawals or craving drugs from what he calls a sympathetic state, or a “fight or flight” response, to parasympathetic dominance, or a “rest and digest” response.

Auricular acupuncture “helps stop you from freaking out,” Fontes said. “We don’t heal when we’re running from the tiger.” 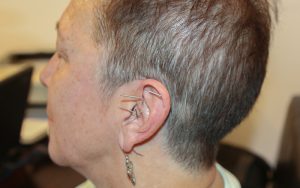 He also says studies show patients are more likely to remain in treatment if they’re also undergoing acupuncture, which increases the likelihood for better outcomes.

But he acknowledges the limitations of any treatment for opiate dependency.

“I will tell you that, percentage wise, all treatment centers are pretty low,” Fontes said. “People tend to change when they’re ready.”

Acupuncture, which the National Center for Biotechnology Information says arose in China 3,000 years ago and spread to the West beginning in the 16th century, remains controversial.

“Acupuncture points don’t exist,” said Dr. Steven Novella, assistant professor of neurology at Yale University. “There’s absolutely no physiology, not some basic science at all, no clinical evidence, nothing either theoretically or directly that establishes that they exist.”

Novella founded Science Based Medicine, a website promoting empirically substantiated medicine that is critical of alternative treatments, including acupuncture.

The website’s “About” page says online information about alternative medicine “is overwhelmingly credulous and uncritical, and even mainstream media and some medical schools have bought into the hype and failed to ask the hard questions.”

For Novella, government licensure and certifications for acupuncturists are tantamount to sanctioning a fraudulent practice.

“They’ll say … ‘This is to protect patients from bad acupuncturists,’ but, really, what they’re looking for is legitimacy,” Novella said. “It’s the Trojan horse getting into the gate.”

Although some individual studies show some benefits from acupuncture for a variety of conditions, Novella said meta-analyses – large-scale, systematic reviews of existing smaller studies – demonstrate acupuncture is little more than a placebo. This includes analyses of smaller studies purporting to show benefits for opioid use disorder. He also said many of the small-scale studies only demonstrate secondary benefits and overstate the benefits of acupuncture.

“The only thing that seems to affect the patient’s response to the treatment is their interaction with the acupuncturist,” Novella said. “If the acupuncturists are instructed to be supportive and friendly, then people get a better subjective response. All of that strongly suggests that acupuncture is just a placebo treatment.”

Despite characterizing acupuncture as a placebo, Novella contends the practice is far from harmless.

“Patients think that it works. And then what do acupuncturists do? They use it to treat cancer,” he said. “They use the legitimacy that they gain from the subjective placebo effect. And then they say, ‘Yes, this is real medicine that treats real disease.'”

Fontes said he has faced critics like Novella his entire career, but he remains undeterred.

“Anytime there’s something that’s not mainstream, eventually, it becomes integrated, and there’s always going to be the people opposed to that,” he said. “The people who want our help, we’re here for. The people who don’t, that’s OK.” 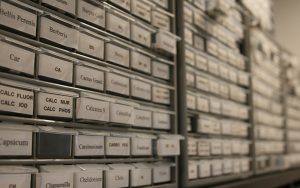 Fontes’ interest in alternative medicine began with homeopathy, and later he expanded into acupuncture. (Photo by Tim Royan/Cronkite News)

Noting that acupuncture has been practiced for millennia, Fontes contends that something more than a placebo effect is occurring, while medicines we’ve had for only a century, such as antibiotics, already are failing.

“It’s the predominant belief that the true path to health is drugs, radiation and surgery,” Fontes said. “I just don’t believe that.”

Looking to the future, Fontes hopes auricular acupuncture will become more widely accepted, and not just for chemical dependency but for PTSD and stress management, too.

Ultimately, Fontes would like acupuncture more widely accepted in hospitals, and in jails and prisons.

“A lot of times, our system is punitive,” Fontes said. “Instead of being helped with your drug problem, you’re punished for the consequences of your drug problem. So, if we can use the current infrastructure to be helpful, rather than just punitive, we may change the outcomes.”