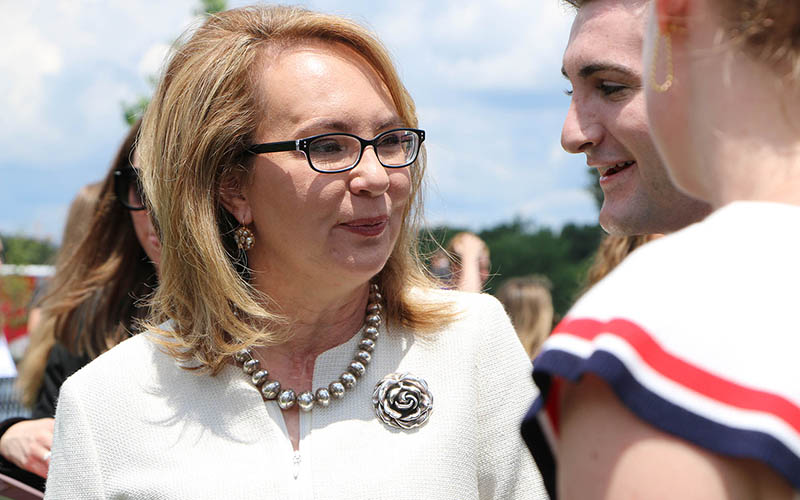 Gabby Giffords was a Democratic member of Congress from Tucson when she was severely wounded in a 2011 shooting during a constituent event that killed six people and wounded 12 others at a Tucson supermarket. (Photo by Miranda Faulkner/Cronkite News)

Former Arizona Rep. Gabrielle Giffords joined Democratic congressional leaders at a Capitol rally Thursday to demand that the Senate take action on a House bill that would require background checks in all gun transfers. (Photo by Miranda Faulkner/Cronkite News)

House Speaker Nancy Pelosi was among the Democrats accusing Senate Majority Leader Mitch McConnell of blocking a vote on the Bipartisan Background Checks Act of 2019. The bill passed the House in February. (Photo by Miranda Faulkner/Cronkite News) 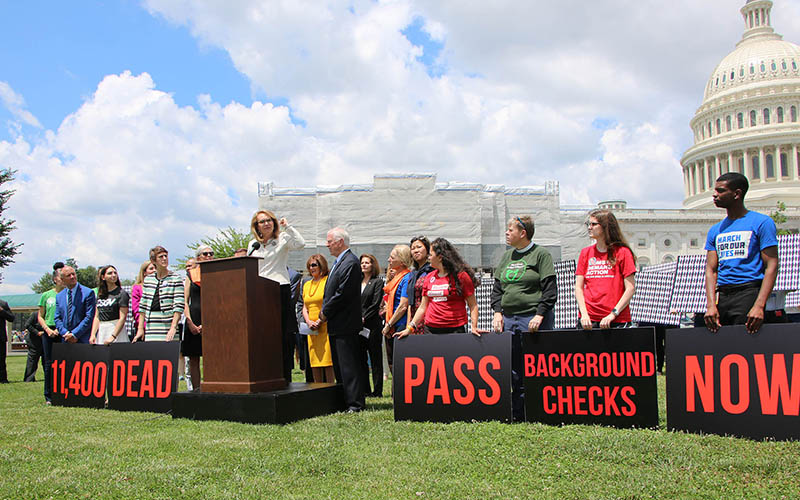 Former Arizona Rep. Gabrielle Giffords joined advocates to call for a vote on the Bipartisan Background Checks Act of 2019 – a bill introduced in the House on the eighth anniversary of the 2011 Tucson shooting that wounded her severely. (Photo by Miranda Faulkner/Cronkite News) 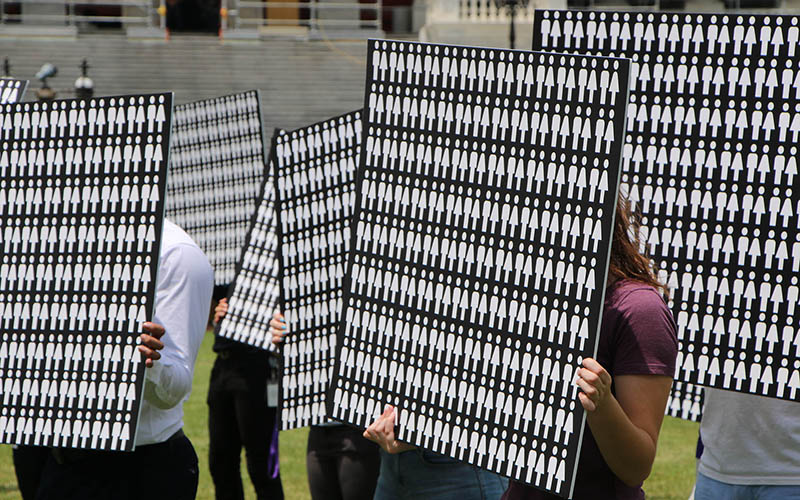 Advocates at the Capitol rally held signs that they said illustrate the 11,400 people who have died in gun-related incidents in the U.S. in the almost four months a gun bill has been awaiting Senate action. (Photo by Miranda Faulkner/Cronkite News)

It is the third time this year that Giffords – who was severely injured in a 2011 shooting in Tucson – has been to Capitol Hill to push for the bill that passed the House on Feb. 27 but has been stalled in the Senate since.

“Now is the time to come together be responsible. Democrats, Republicans, everyone,” Giffords said to a crowd of about 100 people rallying in the shadow of the Capitol.

Coming together was not on the minds of House members when they voted largely along party lines to approve the Bipartisan Background Checks Act of 2019, a top priority of Democrats after they regained control of the House this year. The bill had just five GOP co-sponsors and only eight Republicans voted for it, while just two Democrats crossed the aisle to oppose the bill.

The bill would require background checks for virtually all gun transfers, including transfers between private individuals. It includes exemptions for gifts between family members and for hunting, among other things, but critics at the time said it would infringe on gun-owners’ rights while doing little to reduce gun violence.

Editors: An earlier version of this story incorrectly reported results of the Feb. 27 House vote on the background-checks bill. Eight Republicans voted for it and two Democrats opposed it. The story has been corrected, but clients who used the original version are asked to run the correction found here.

Many were like Rep. Debbie Lesko, R-Peoria, who said the “well intentioned” act “would not have prevented any of the mass shootings in the last 20 years.”

“Criminals don’t get guns legally, and will not complete a background check to get their guns,” she said on the House floor in February.

Since passing the House, however, the bill has stalled in the Republican-controlled Senate, where it has yet to get a hearing. The bill’s supporters held signs Thursday to illustrate the 11,400 gun-related deaths that they said have occurred in the U.S. since the measure passed the House.

Advocates blame the delay on Senate Majority Leader Mitch McConnell, R-Kentucky, who in an April meeting with constituents jokingly said he should be referred to as the “Grim Reaper” when it comes to killing what he believes is socialist-leaning legislation.

That was not a comment the House Speaker Nancy Pelosi was about to let pass.

“More than 90% of the American people want background checks, and since Senator McConnell refused to take up HR 8, 11,400 people have died from gun violence,” said Pelosi, D-California. “Senator McConnell calls himself the Grim Reaper, we cannot accept that.

Calls seeking comment from McConnell’s office were not returned Thursday. But Giffords said in a tweet that it is time for the Senate majority leader to “do his job.”

Giffords has been the face of gun-violence prevention since she was severely wounded in an assassination attempt during a Jan. 8, 2011, open meeting with constituents at a Safeway in Tucson. Six people were killed in the shooting and 13 injured, including Giffords who was shot in the head.

During her long recovery from that shooting, Giffords and her husband, former astronaut Mark Kelly, were spurred to action after the 2012 shooting at Sandy Hook Elementary in Connecticut that killed 26 people, 20 of them schoolchildren. They formed an advocacy group, now known simply as Giffords, that says it works for responsible gun ownership.

It’s time to vote on the background check bill that was introduced on the eighth anniversary of her shooting, the Tucson Democrat said.

“Be bold. Be courageous. The nation’s counting on you,” Giffords told the crowd, in what has become her standard rallying cry.