PHOENIX – At least nine wildfires are burning around Arizona, only three of which are prescribed burns. Fire experts say with high temperatures, combined with an increasing amount of brush drying up from the abnormally wet winter, the fire danger is high – particularly in southern Arizona, where the threat is above-average.

Two of the fires burning in the Tonto National Forest northeast of Phoenix were human caused, officials said, but they’re burning away from structures.

Bryan Henry, assistant predictive services program manager with the National Interagency Fire Center in Boise, Idaho, said this year’s monsoon season may be delayed, meaning the danger for wildfires will likely continue further into the fall than usual.

The weather patterns that gave Arizona its extra-wet winter may also kick up heavier winds over the summer, Henry said, which could exacerbate fire conditions. Similarly, the lower temperatures and humidity that kept Arizona’s grasses from drying out appear to be coming to an end as the summer heat settles in. The Phoenix area is expected to reach 110 degrees Tuesday, and an excessive heat advisory is in effect through Thursday.

Two of the fires burning over the weekend and into Monday afternoon collectively have scorched nearly 9,000 acres, also though authorities say neither the Mountain Fire nor the Woodbury Fire poses a threat to humans.

The fire, first reported Friday morning near Bartlett Lake, is burning through grass and brush away from homes in Cave Creek.

Bartlett Dam Road was closed through the weekend at the intersection with Cave Creek Road, and nearby campgrounds also were closed. The road reopened Monday morning, and officials said the Bartlett Lake and Horseshoe Lake recreation areas are again open to the public.

However, Brad Widhalm, a spokesman with the Central West Region of the Tonto National Forest, warned residents against stopping in the area to watch the fire.

“They shouldn’t be stopping to take pictures, ‘cause they’re just creating a hazard for themselves plus other people that are driving along the road,” Widhalm said.

Widhalm said the team managing the fire has since moved to assist the containment of the nearby Woodbury Fire, which started Saturday afternoon. There are 243 personnel working on the fire, according to InciWeb reports, and Widhalm said smoke from the fire may still be visible on Monday.

Woodbury Fire
The Woodbury Fire has already burned 1,400 acres 5 miles northwest of Superior, also in the Tonto National Forest. As of Monday afternoon, about 75 personnel were working to contain the fire. 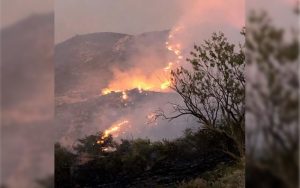 Reported on Sunday afternoon, the Woodbury Fire is located approximately five miles northwest of Superior near the Superstition Wilderness. The cause is noted as “human caused.” (Photo courtesy Tonto National Forest via Incident Information System)

“Looks like it is burning mesquite and brush, but as it moves higher in elevation it may get into some juniper and oak,” Carrie Templin, a spokeswoman with the Tonto National Forest, told KJZZ.

No roads have been closed because of the fire, but Templin said hikers should avoid the Woodbury and Rogers Trough trailheads, as public traffic could block firefighters’ attempts to reach the area.

The Woodbury Fire is also believed to be human-caused, though authorities don’t yet know the source.

Although smoke may be visible from nearby communities, Templin said, the fire doesn’t threaten people.

“Everything I’m seeing is leading me to believe that it’s going to burn into the wilderness, which is going to make suppression efforts harder on us,” Templin said. “But … it’s going to be moving farther and farther away from any communities.”