PHOENIX – The towering, often terrifying thunderstorms that signal the start of Arizona’s monsoon season typically begin in mid-June and last through the end of September, but meteorologists say we’ll likely see a delayed start this year. The meteorology department at Embry-Riddle Aeronautical University in Prescott this week predicted a much later start to the summer rainy season.

Monsoons in northern Arizona, for example, usually show up around the Fourth of July, but that could be delayed a couple of weeks, Embry-Riddle meteorologists said.

The word monsoon means a “seasonal reversal of wind.” For most of the year, winds in Arizona blow from the west, bringing mostly dry air, but during the summer, meteorologists say, the winds come from the south, bringing warmer and more humid air over the state.
But according to Embry-Riddle meteorologists, cooler waters in the Sea of Cortez – also called the Gulf of California – will likely delay the start of the 2019 monsoon.

With a delayed start comes more time to prepare for these storms, which can produce dangerous lightning, destructive winds and torrents of rain in mere minutes. Here are a few tips from utility companies, city officials and law enforcement officials for having a safe monsoon season.

“We have a list of things you should have in your home really year-round. Things you tend to take for granted,” she said. “Have things like a can opener that isn’t electric … portable chargers for our cellphones we completely rely on. An AM/FM radio on hand that you can listen to for alerts and things like that.” 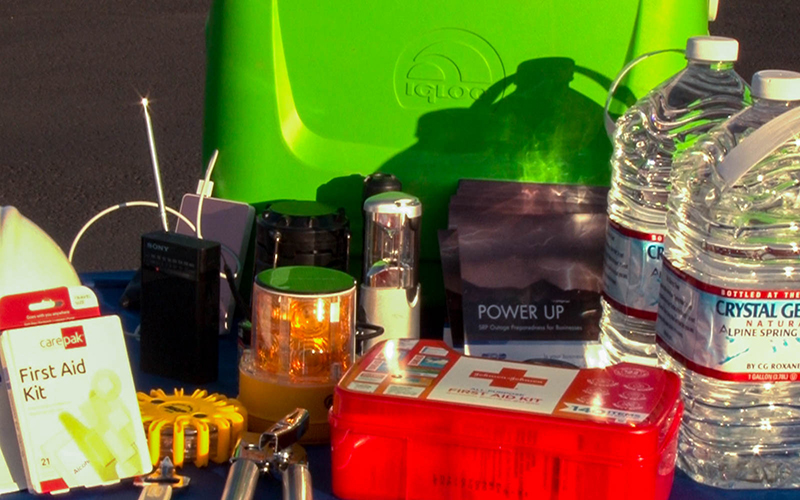 A fully-stocked emergency kit makes a big difference in the event of a power outage. (Photo by Amanda Slee/Cronkite News)

Coolers and bags of ice are worth having on hand, Mascareñas. And bottled water is a must.

“Make sure that you have a gallon of water per person in the home to drink to make sure that during that storm season you’re hydrated if the lights happen to go out for an extended period of time,” she said.

A first-aid kit is paramount to ensure your household’s safety in the event of an emergency, Mascareñas said, adding that it’s important to keep your kit refreshed, as many first-aid items have expiration dates.

Downed power lines can be hazardous to drivers and pedestrians.

“With the monsoons coming up, we get these big microbursts and it has the potential to knock our poles over,” said Scott Kahrs, Arizona Public Service lineman troubleshooter. “The most important thing is to stay away. Call 911, call us, and we’ll make sure the area is safe.”

Kahrs and APS demonstrated how dangerous touching downed power lines can be to people by sending electricity through a hotdog.

Downed power lines will energize the ground around them, with point of ground contact as much as 7,160 volts, according to Phoenix officials. (Video by Amanda Slee/Cronkite News)

“We use 7,000 volts to energize the hot dog, but that’s less than one amp,” Kahrs said. “What you’d be exposed to with a real power line would be hundreds, maybe even thousands of times stronger than that.”

As rainwater pools on roads, hydroplaning can become an issue.

“It can happen with a water depth of less than a tenth of an inch of rain,” Thompson said. “It can also happen with speeds of about 35 miles per hour or higher.”

The first 10 minutes of rain can be the most dangerous, Thompson said. Dust, oil and other fluids that leak from cars daily rise to the road’s surface when the rain starts.

“Essentially, in the first 10 minutes you could be driving on an oil slick,” Thompson said.

Water can pool quickly as summer storms hit metro Phoenix. It takes as little as a tenth of an inch of standing water to enable hydroplaning. (Video by Amanda Slee/Cronkite News)

The three most important factors to avoid hydroplaning are tread depth, speed and the amount of water on the road. Thompson said driving at slower speeds and avoiding driving on tires with low tread can greatly improve your chances of making it through the storm safely.

The best choice, however, is to avoid driving altogether during a monsoon storm.

“If you don’t have to drive in it, don’t,” Thompson said.

Flash flooding can be a serious hazard to public safety. A flash flood in mid-July 2017 took the lives of nine people in north Phoenix. 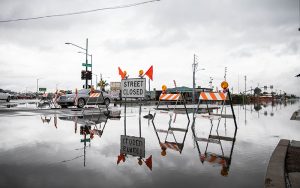 Streets that have been closed by the street maintenance department could have hidden hazards, such as potholes. (Photo by Celisse Jones/Cronkite News)

According to the National Weather Service, it only takes on1 to 2 feet of water to float a vehicle, even an SUV.

Street maintenance supervisor Carlos Diaz said the most important thing for people to know is that streets with “street flooded” signs should be avoided until the area is clear.

“There’s potential that there could be a hole in the street (hidden by standing water). If you see the area, just turn around and avoid it,” Diaz said.