PHOENIX – Every week, thousands of hikers climb Piestewa Peak to take in the views and get in some exercise. In early April, hikers started to see plants splashed with bright blue chalk.

It’s part of an effort to raise awareness about buffelgrass, an invasive species that worsens a problem many Arizonans are already familiar with. Buffelgrass makes excellent kindling for summer fires, and it’s prone to burning fast, hot, and often.

Ranchers introduced the shrubby grass into Arizona in the late 1930s, hoping it would reduce soil erosion and feed cattle. The plant took off in Tucson, and has spread to Pinal, Maricopa and Yuma counties in the decades since. It also has established itself from California to Florida and has been found in New York and Hawaii, the National Park Service says. 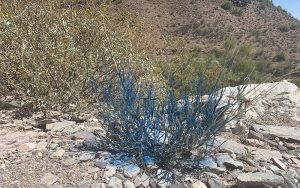 Hikers going up Piestewa Peak in north-central Phoenix will see buffelgrass marked with nontoxic blue chalk to draw attention to this invasive species. Buffelgrass was brought to Arizona in the late 1930s from South Africa to control soil erosion and feed livestock. (Photo by Gabrielle Olivera/Cronkite News)

Now the Buffelgrass Blues campaign aims to raise awareness about the problems with buffelgrass. The Phoenix Parks and Recreation Department, the Desert Botanical Garden and the Central Arizona Conservation Alliance are all involved in the effort. Organizers hope to highlight how Pennisetum ciliare, which is native to South Africa, is outcompeting native plants for water and eliminating food sources for native wildlife, including desert tortoises.

Buffelgrass produces many seeds, which are easily spread by wind and water, according to the National Park Service. In addition, each seed has bristles that allow it to hitch a ride on passing humans and animals.

“This grass can have a lot of negative impacts on this landscape,” said Annia Quiroz, with the Buffelgrass Blues campaign. “First and foremost is fire. This grass carries the fireload that is very heavy, and can burn up to 1,600 degrees Fahrenheit, which is pretty much in the same range as lava.”

Since the campaign launched last fall, dozens of volunteers have attended Buffelgrass Bootcamps, where volunteers and Phoenix park rangers learn how to use an app called Collector to map areas where buffelgrass is prevalent so it can be removed on “pulling days.”

Pulling is a bit of a misnomer, though, because removing buffelgrass properly requires a pickax and hours of painstaking labor. Clearing a 10-by-10 foot patch of buffelgrass is a three hour process.

Because it’s such a strenuous process, Buffelgrass Blues won’t hold any pulling days until the fall when it cools down. Buffelgrass Bootcamps and mapping days still will take place over the summer, however.

For removal in the most heavily infested areas, options are limited. There’s chemical spraying by helicopters and manually removal the plants, Quiroz said. But both are expensive and disrupt the local wildlife she explained. 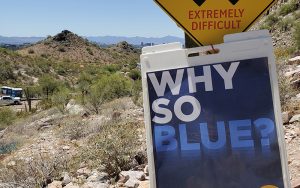 There’s a new education campaign around Piestewa Peak to raise awareness about buffelgrass, which is crowding out native plants and wildlife. It also poses a huge fire risk. (Photo courtesy of Annia Quiroz)

“It’s up to the cities to best determine how they want to handle their invasives problem,”
she said.

Sandy Bahr, the chapter president of the Sierra Club of Arizona, has volunteered to remove buffelgrass in the past.

“It will crowd out other plants and before you know it, you have a field of buffelgrass instead of our beautiful Sonoran Desert vegetation, and also creates unnatural fire conditions,” Bahr said. “I guess it’s just a reminder that we need to be careful about what we bring into our environment.”

Quiroz will lead a training session for the county at 8:30 a.m. on Saturday, June 1, at the White Tank Mountain Regional Park Nature Center.