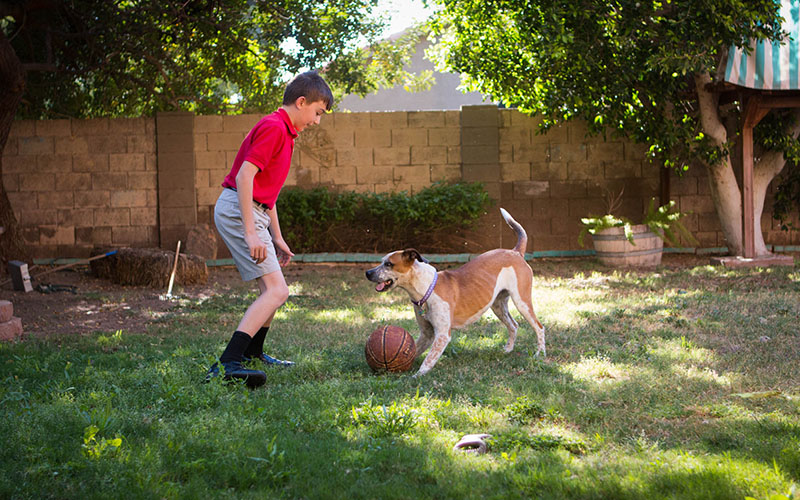 Roman Phillips, 12, contracted a mild case of whooping cough when he was in kindergarten. He had to have surgery to replace the tubes in his ear. Some parents choose not to vaccinate but Roman’s parents chose to vaccinate him, saying it’s a “healthier option.” (Photo by Delia Johnson/Cronkite News)

PHOENIX – Black socks peek from Roman Phillips’ shiny loafers, his cherry-red polo neatly pressed and tucked as he sits in the backseat, tapping on his mother’s smartphone. The ride to school is the only time his mom, Jacquelyn Phillips, allows her 12-year-old son to play video games.

Health officials warn that vaccination rates are deteriorating across Arizona

The Gilbert mom heads to her regular stop along the way, a Dunkin Donuts drive-thru for coffee, dollop of cream, chatting about identity as she waits in line. She says people her age – 36 – lack identity, clinging to any sort of ideology.

A lack of identity, she says, is at the heart of the anti-vaccination movement, which she scorns.

In Heather Wolcott’s Ahwatukee Foothills home, weekday mornings are leisurely as she fixes a mix of essential oils. Her kitchen smells like a yoga studio – peaceful and relaxing. Her son, 5, doesn’t emerge from his room until 7:20 a.m. and totters from the living room to the kitchen, sleepy-eyed and pajama-clad as he struggles to choose between the comfort of the couch and breakfast.

Wolcott’s daughter, 9, who’s about to enter fourth grade, sits at the granite countertop, across from her mom, as she fixes her a bowl of yogurt, topped with granola and berries. She takes her time eating and nestles into a corner of the leather couch with a book when she’s done. As it nears 8 a.m., the kids start piling into the car. Time for school.

Wolcott, 44, and her husband decided not to vaccinate their children. Maybe other parents are fine with injecting an unknown, possibly dangerous substance into their children, Wolcott said. Their lives, their decision. Just don’t tell my family to do the same.

“It’s so scary having kids, you just worry so much,” she said.

Two families, two suburbs and a polarizing choice: to vaccinate their kids or not.

Health officials warn vaccination rates are deteriorating across Arizona, risking public health as parents continue to opt out of immunizations. Immunization levels in the last year fell further below the necessary rate to guarantee community protection against the outbreak of vaccine preventable diseases. Those opposed to vaccinating children say officials are exaggerating the public health threat.

Phillips and Wolcott each say they are making the best decisions for their children when it comes to vaccinations. Both are married and chose charter schools to educate their children. Both restrict television and video games to foster their children’s creativity, prepare healthy dinners where their families gather around the table to talk about one another’s days and set early bedtimes for their children so they get plenty of rest.

The two belong to social media communities that reinforce their beliefs about vaccinations, where parents, doctors and advocates for both sides fling opinions and stats across a Facebook battlefield. 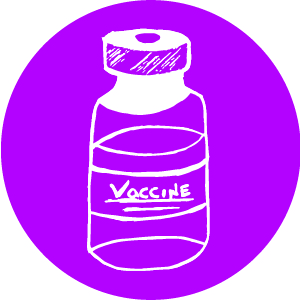 The vaccination war carries a circle of scrutiny, with the whiff of awareness that everyone is quick to judge everyone else – and everyone is just as concerned about their children as the next parent.

Wolcott, who works from home as a nutrition and fitness consultant, said she is more afraid of the ingredients in vaccines harming her children than she is of her kids contracting the measles or mumps. Public health messages saying that vaccines protect her children and others in the community don’t sway her.

Wolcott does not dislike parents who vaccinate, she just wants the choice to opt out.

Phillips equates choosing not to vaccinate to drunken driving. She carries the memory of her son, in kindergarten, contracting a mild case of whooping cough. He had to have surgery to replace the tympanostomy tubes in his ear.

“I love that there’s this movement of making good choices for your children and directing them to healthier options,” Phillips said. “Vaccination is a healthy option because the alternative is an illness that can either kill you or debilitate you for life.”

Phillips thinks of the controversy as a problem for certain people in her generation – white, educated, upper-middle-class Gen Xers who head from college, to marriage, to kids.

“You wear all these hats but you don’t have a sense of self,” said Phillips, a photographer who owns a wedding business. “You cling on to something that gives you some validity to your existence.” 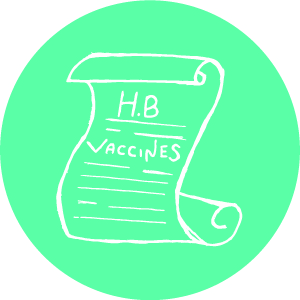 The opposing factions of parents rarely face one another in the same physical space. Instead, they wield Facebook posts across Arizona and the rest of the country. Thousands of posts hurl unfiltered judgment and the science of their choice across desktops, laptops and smartphones.

The debate has led parents to be wary. The Wolcotts would not allow their children to be photographed and the names of the children are being withheld from the story.

“There’s no peer review for the internet,” she said, “and there’s no monitoring.”

Phillips and Wolcott are both active members of vaccination-centered Facebook groups, comprised mainly of mothers, each espousing different beliefs.

In Wolcott’s group, mothers across the Southwest discuss the risks of vaccinating and the opposing side’s propensity to reduce them to “anti-vaxxers.” They prefer language like pro-health or vaccine-choice.

Many re-post articles from Dr. Sherri Tenpenny, an osteopath who has gained fame in the anti community. Wolcott said California mothers who belong to the group are distraught because state officials in 2015 removed the personal belief exemptions after a measles outbreak at Disneyland. Some parents even contemplated moving or homeschooling their children because of it. 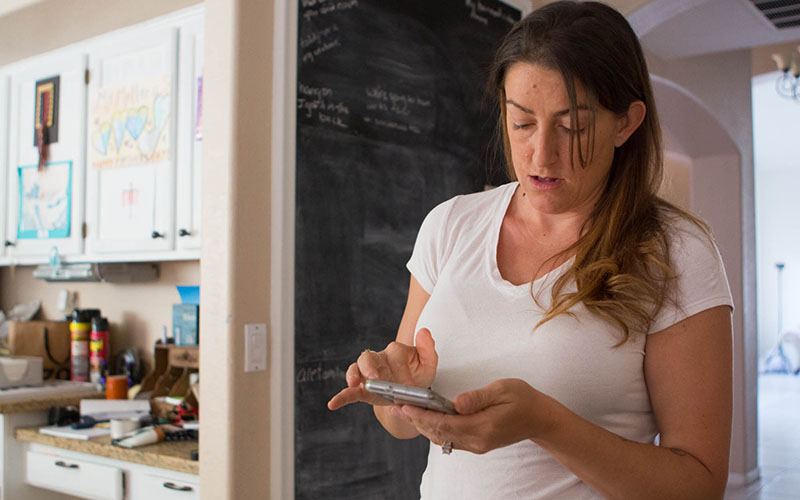 Jacquelyn Phillips posts her views about vaccination on Facebook. Choosing to not vaccinate is like choosing to drive drunk, she says. (Photo by Delia Johnson/Cronkite News)

On the other side of the virtual wall, Phillips belongs to a Facebook group of self-proclaimed “crunchy” mothers who advocate for vaccines as part of an active, natural lifestyle.

“You can be crunchy and organic and still be vaccinated,” Phillips said.

When Phillips posts something to Facebook she often captions it: “If you do not agree with my position, these posts aren’t for you,” in efforts to ward off negative comments, but it’s not always effective.

Recently, Facebook has vowed to crack down on vaccine posts.

“We are working to tackle vaccine misinformation on Facebook by reducing its distribution and providing people with authoritative information on the topic,” Monica Bickert, vice president of global policy management, said in a post on Facebook’s Newsroom.

Updates to the post in April mention removing access to fundraising tools for initiatives that spread misinformation about vaccines.

An article published in monthly peer-reviewed medical journal Human Vaccines & Immunotherapeutics, two researchers with the division of medical ethics at New York University explored how vaccination-choice groups can garner the masses on social media to promote their claims.

The paper focuses on the claims of one group, A Voice for Choice, whose website says vaccines contain aluminum, a “neurotoxin” that exceeds EPA safety levels and that an infant can receive up to 4 milligrams of aluminum through vaccinations. The researchers point out that infants consume 7 milligrams of aluminum through nursing in the first six months of life, as the metal is found naturally in breast milk. 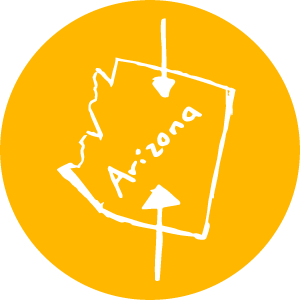 Arizona officials are caught between making decisions for the welfare of the community and questioning a parent’s right to decide what is best for their child. Within the vaccine divide, the Wolcott and Phillips families carry on with their lives.

When Phillips pulls into the pick-up line at school, her son already is waiting by the curb. At home, mother and son set aside time before music practice to do homework together. Phillips sits on the couch tapping on her laptop as her son works beside her. 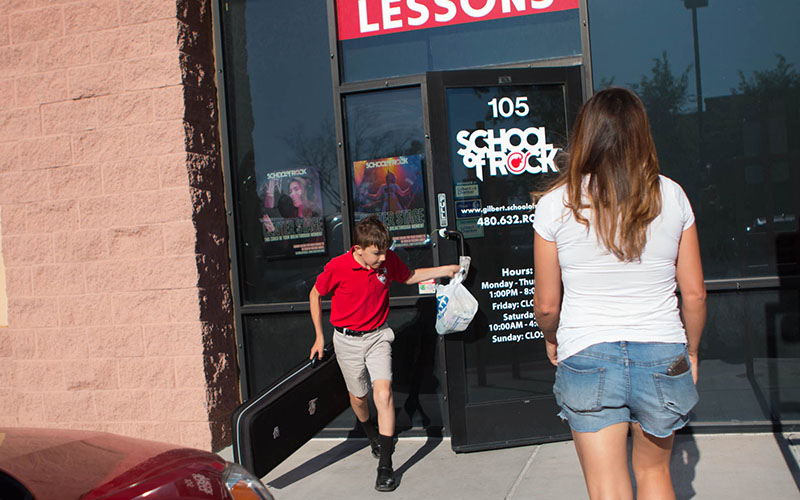 Jacquelyn Phillips takes her son to music practice after school. “Vaccination is a healthy option because the alternative is an illness that can either kill you or debilitate you for life,” she says. (Photo by Delia Johnson/Cronkite News)

“My kid doesn’t have an iPad. He has to entertain himself,” she said.

After homework time, he runs around with their two dogs, Daisy and Rosie, in the backyard fitted with a large pool, treehouse and a mural with blossoming, vibrant flowers spray painted onto an ocean of blue.

Phillips always wanted to give her son the childhood she never had, with a healthy home life, lots of family time and a thick skin. 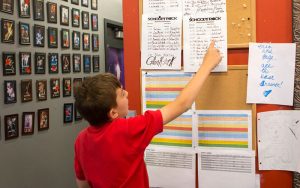 Roman Phillips points out which songs he will play during their band’s upcoming show. His mother said vaccinations are important to protect her son and the community.(Photo by Delia Johnson/Cronkite News)

When she found out she was having a boy, she imagined having an athletic son who would toss a football back and forth with her. That’s not who Roman is.

After school on a Monday afternoon in Chandler, three girls with fuchsia backpacks pile into Wolcott’s white minivan. Wolcott’s daughter plops down in a window seat, beside her friends, and soon they begin giggling about a space game they had imagined over the weekend.

Wolcott steals a glance at them every few minutes through the rear-view mirror, grinning as she recalls how her daughter talked all about the game the trio had made up over the weekend.

“It’s funny. I never pictured myself being the family mom in the suburbs,” she said. “But it’s the best, most rewarding job in the world – I wouldn’t trade it for anything.”

If they’re not at school, or at piano practice or playing sports, Wolcott’s kids are with her.

Sometimes she longs for five minutes of alone time but quickly dismisses the feeling when she looks at how fast her children are growing – she feels as though time is flying. She already misses her son’s baby feet and baby hands – she realizes she won’t get that newborn baby smell again.

In front of a piano keyboard, Wolcott’s son taps away at the black and white keys, his eyes following his mom’s finger as she glides it across the notes. When the two practice piano he gets to play his number game and writes out a number line from one to six, crossing off a number each time he plays through the piece. By the time he pencils a jagged slash through the six, he begs to play Jingle Bells.

Wolcott grins at this – he loves Christmas songs, she said.