PHOENIX – Squeals of joy fill a colorfully decorated schoolroom before breakfast on a Thursday morning. As the children wash their hands one-by-one, cook Mariela Alejos pushes plastic carts loaded with freshly prepared beans, tortillas and watermelon to each classroom. 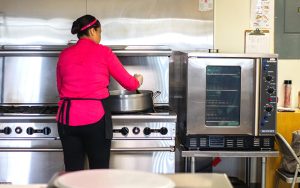 Mariela Alejos started cooking when she took a class in Mexico as a teenager. She honed her skills at home with her family. (Photo by Nicole Hernandez/Cronkite News)

Alejos feeds schoolkids every day at Arizona Migrant Head Start in Surprise. The smell of fresh cut cilantro fills her kitchen, mixing with the aroma of beef slowly simmering on the stove for lunch.

Alejos does everything with purpose. In between each task, she cleans any dishes, washes her hands and pulls on a fresh pair of gloves. She makes sure her kitchen stays pristine.

Maricopa County restaurant inspectors include day cares and school kitchens in their regular inspections, and there’s a wide range of performance levels for the 1,509 permitted schools and day cares. Violations from kitchen inspections pertain to food prep, storage and kitchen cleanliness.

“You want to get your letter A,” Alejos said.

After 19 inspections in the past six years, Arizona Migrant Head Start has received just one violation. 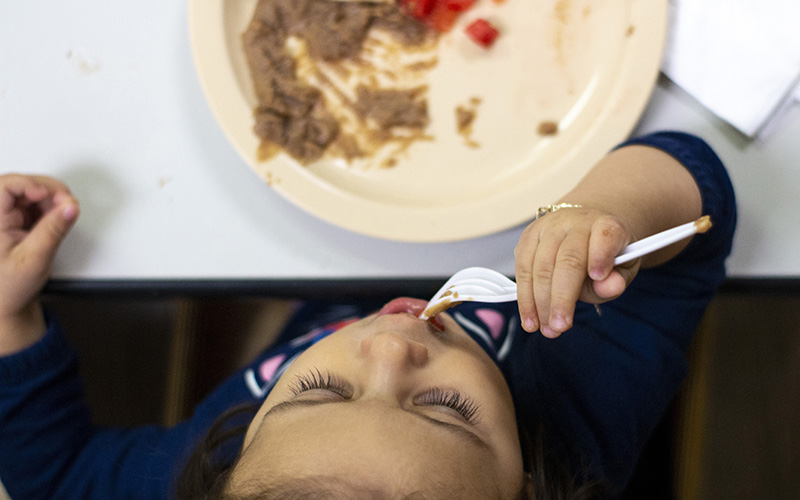 Arizona Migrant Head Start requires everyone to wash their hands before eating a breakfast of beans, tortillas, watermelon and milk. The food is prepared daily in the school’s kitchen. (Photo by Nicole Hernandez/Cronkite News)

“If everything is good in the kitchen, the kids … they’re healthy,” Alejos said.

But not every kitchen is as diligent. Based on Maricopa County inspection data from 2013 through 2018, 51 day cares or schools received more than 20 violations in that time.

Magali Bustillos, an environmental health specialist for the county, said day cares and schools are not obligated to notify parents when they are consistently underperforming on inspections. The information is available on the Maricopa County website, so it is up to the parents to check that the food their children are being served is prepared properly.

Carleigh Dillman’s 2-year-old daughter attends Little Scholars Academy in Peoria. Dillman chose the private preschool and kindergarten because of its outstanding online reviews, but she didn’t know its kitchen had been flagged for 30 violations since 2013. The violations range from personal cleanliness of the staff to the way hot and cold food are held.

“Temperature control, that’s a big one,” she said. “Because you don’t want to serve somebody that’s – I mean, if the temperature is incorrect, they can get sick from the food they eat.”

County health inspections are meant to prevent these violations through oversight and education.

“When you let someone in the kitchen know that … you are serving a highly susceptible (group) … and you provide them with training and resources that we have, they’re usually pretty receptive,” Bustillos said. “I think it’s based on education.” 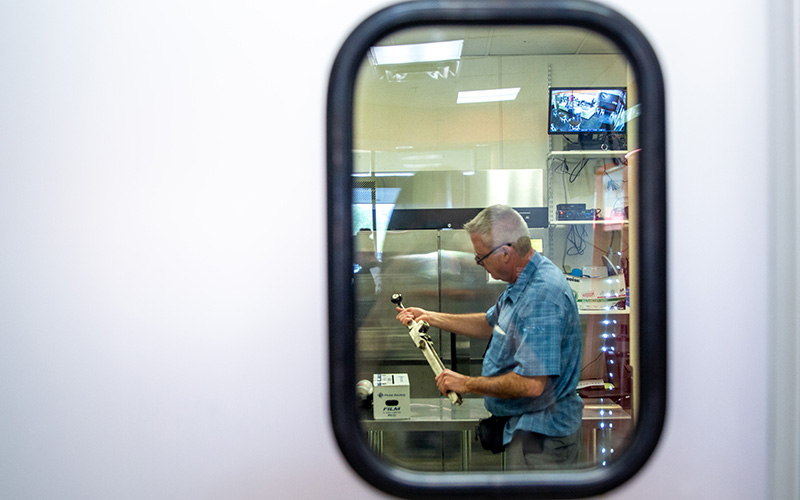 Maricopa County has conducted more than 21,000 inspections of day care and school kitchens since 2013. Although these inspections are informative, they aren’t the only inspections schools and day cares receive to legally operate.

“You put your faith into (them) with your kids and their lives every day, and it’s hard enough to drop them off,” Dillman said. “And then not knowing what’s going on while they’re there.”