Amethyst Hinton Sainz, who teaches at Rhodes Junior High School in Mesa, supports recent changes to the state’s English Learner program. The old one, she says, resulted in “virtual if not complete segregation” of EL students. (Photo by Kelsey Mo/Cronkite News). 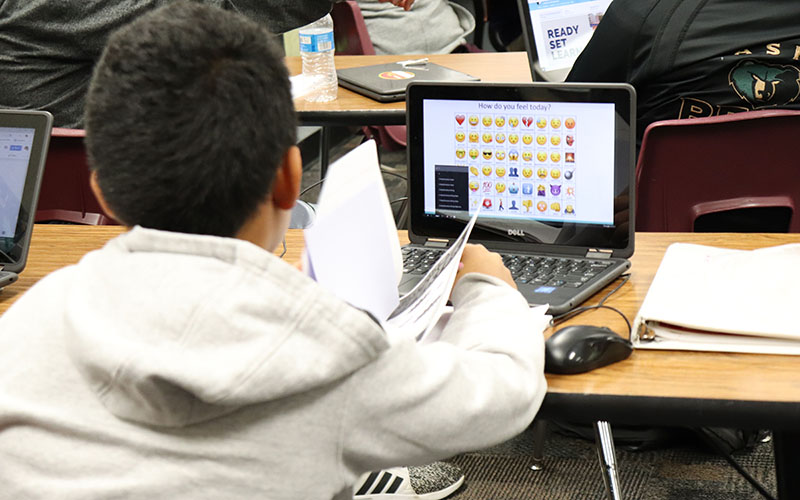 A Rhodes Junior High student works on his “mixed emotions” assignment, writing a short paragraph about a time when his feelings were conflicting. (Photo by Kelsey Mo/Cronkite News) 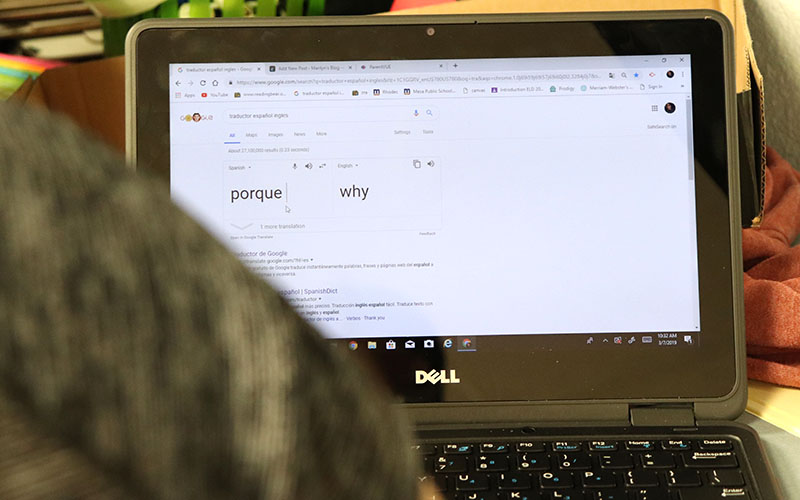 Students can use Google Translate to help them write their assignments – but only for certain assignments. (Photo by Kelsey Mo/Cronkite News)

MESA – A cacophony of voices speaking in Spanish, interspersed with laughter, fills a classroom at Rhodes Junior High School. Some students speak halting English, but on occasion they attempt to translate for students who don’t speak any. 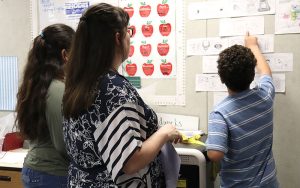 As the students try to type short paragraphs describing a time when they experienced conflicting emotions, several use Google to translate phrases or entire sentences. The students later upload those paragraphs to their blogs.

“Buscar a, buscan, buscen … como se dice?” she asked, conjugating the verb “to look” in Spanish.

“Buscen,” some of her students replied.

“Buscen a edublogs in your Gmail,” she told them.

Arizona has had a difficult history with providing adequate education for English Learners, which led to a lawsuit against the state in 1992. A law passed in 2006 required every school district to provide a four-hour model of Structured English Immersion for students who are classified as English Learners. Critics say the program segregates students who do not speak English as their native language from students who do.

In February, however, Gov. Doug Ducey signed Senate Bill 1014, which reduces the number of required hours EL students must be taught and gives school districts flexibility to craft their own research-based models. Advocates say this will help students and improve scores on AZELLA, a test used to measure proficiency in English.

‘Virtual if not complete segregation’

Rhodes Junior High, near Baseline and Dobson roads, doesn’t have a “set” bell schedule. Students attend what’s called advisory periods at the beginning and end of the day, where they might receive mentoring and individual work time.

Wednesdays at Rhodes is “Social Emotional Learning Day.” There are schoolwide celebrations, the students have more “independent learning time,” and clubs meet during school hours.

But Hinton Sainz’s students, who are intermediate- and introduction-level EL, didn’t often get to participate in the fun because of the required four structured hours of reading, writing, vocabulary and conversation, and grammar. With only so many hours in a day, it was impossible for students to be in the Structured English Immersion program and fit in math, phys ed and other classes required for graduation.

Some EL students haven’t had science or social studies all year, Hinton Sainz said. Her students were stuck in the four hour block, unable to attend other classes.

This sort of rigid model results in “virtual if not complete segregation,” she said.

“Without building a rich tapestry of background knowledge, English learners will fall behind in areas other than English and will lack the conceptual knowledge on which to hang their language,” she said at a January hearing at the Legislature for SB 1014.

Advocates say the low reclassification rates are the product of a failed system. Stefan Swiat, a public information officer with the state Department of Education, said the four-hour block has hindered the academic success of EL students.

Data for 2014 and 2015 were not available, Swiat said, because the state took a hiatus on the A-F School Accountability System, which gives letter grades to schools based on their achievement. Because the program wasn’t in effect, the data for reclassification rates was not included in its mandatory reporting. 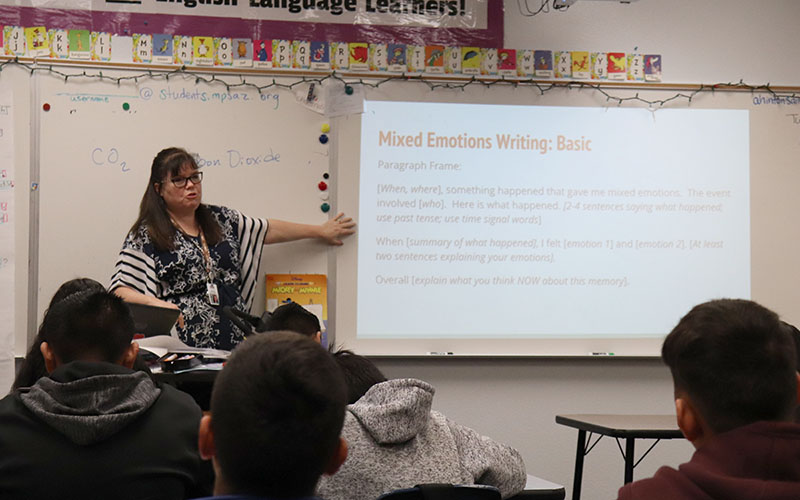 In 2016, the federal Office for Civil Rights told the department it was releasing students from English Language programs too early for them to achieve proficiency on other required assessments.

“So they tightened the screws on us and said that we had to beef up AZELLA … and basically keep students there longer and create more rigor for them so they can perform better and achieve proficiency on AzMERIT,” he said, explaining why test scores dropped.

With the new law, Swiat has high hopes.

“I would not be surprised whatsoever if we see reclassification increase even more after this legislation,” he said. “Being around people and interacting is the fastest way to actually improve your language skills. And that was being withheld from them. … So with that removed, I think you’re going to see a huge step forward for those students.”

A workaround at Rhodes

Hinton Sainz attended an Office of English Language Acquisition Services conference in 2018, where she learned what an equitable environment looks like. She said it helped her realize that school programs and Social Emotional Learning provided at Rhodes were not equal for non-EL and EL students.

And not all students in the introduction class have the same skill set. Some students are more fluent and able to answer questions, and others have just moved to the state with no knowledge of any English, Hinton Sainz said, adding that it was nearly impossible to meet each students’ needs.

“They’re not part of the school community, they’re not getting exposed to any curriculum outside my class and I’m having to spend time over and over again going over ‘to be’ is a verb,” she said. “Those top kids get bored of that stuff really fast.”

So Hinton Sainz created a workaround for the top-performing introduction students to give them time to take other classes. All the students stay together for reading and writing, but she moved the more advanced introduction students into the 48-minute advisory periods at the beginning and end of the day, during which she taught EL curriculum to get as close to the four hour requirement as possible.

That freed up extra periods during the day for those students to take elective classes, such as physical education and performing arts. It also gives those students exposure to English outside Hinton Sainz’s classroom and may help them feel more integrated into the school. It can get confusing because the school schedule changes day-to-day, but Hinton Sainz thinks letting students learn other subjects is worth it.

“It’s still crazy, but it’s not as crazy as it sounds like from the outside,” she said. “They know where they’re supposed to be.”

How the state has dealt with EL before

Arizona’s history with EL has been rocky.

In 1992, parents of students in the Nogales Unified School District filed suit in federal district court alleging the civil rights of English Learners students were violated under the Equal Education Opportunities Act because Arizona did not have a program that included “adequate language acquisition” or sufficient funding for EL students, and entry and exit procedures were poor.

In 2000, the court ruled in favor of the plaintiffs and the Arizona Department of Education entered a consent decree that said:

That same year, voters approved Proposition 203, which mandated that students identified as EL would be educated separately through Structured English Immersion programs for no more than a year.

Several bills nearly became law from 2004 to 2006 that would have helped with funding, but Gov. Janet Napolitano vetoed nearly all of them.

The courts later determined the state met all the requirements of the consent decree in 2014.

Under language voters approved in Prop 203, EL students were supposed to remain in these programs for no more than a year to become proficient in English. But in practice, this hasn’t always worked out. And with low reclassification rates, one state lawmaker acted to change the status quo.

Senate Bill 1014, introduced by Sen. Paul Boyer, R-Phoenix, reduces the required hours of SEI from four hours to two hours for students in kindergarten through fifth grade, and to one hour and 40 minutes for students in grades 6 through 12.

This allows school districts to submit their own “research-based” SEI models to the State Board of Education, which will have to create a framework to evaluate those models, for approval. The law also got rid of the one-year limit.

Boyer, an English teacher, said in a hearing that the Legislature does not dictate curriculum or how teachers should teach, but laws for teaching English were too stringent.

Hinton Sainz, who testified in committee, said that her students deserve to be integrated into the school as “social equals lacking only in language,” adding “they do not deserve to be shut off from the vast majority of seventh and eighth grade curriculum and community.”

At the hearing, Stacey Morley, government affairs director for Stand for Children Arizona, said SB 1014 was the culmination of a journey that began a few years ago in the Roosevelt School District, where a group of parents were frustrated their children were “segregated,” not reclassifying.

She added that on average, students spend seven years classified as an EL student.

“We are not throwing the baby out with the bath water. But we want to see what’s working and what we’re spending our money on and really allow local teachers and educators to make decisions for their students,” Morley said.

Hinton Sainz says she wants two full-time EL teachers for seventh and eighth grade. Dividing it up by grade level would simplify the current process of communicating between the different teams, she said, adding that she would like a separate period dedicated for new students to help them learn the basics before moving on through the program. 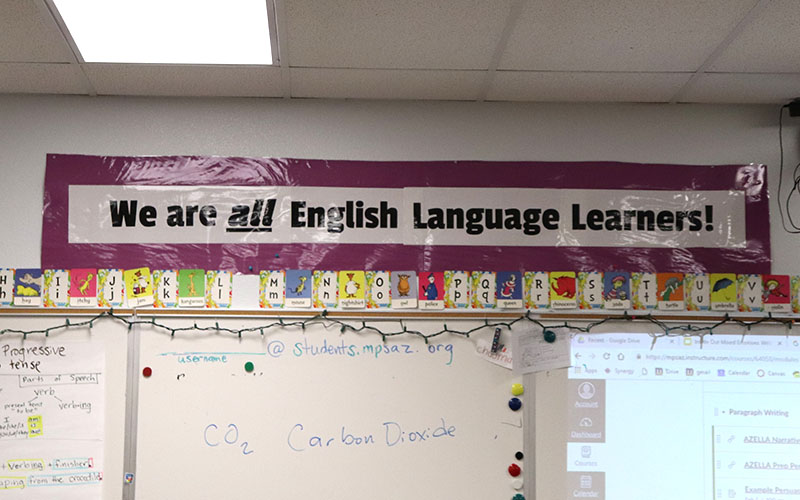 In the coming year, Arizona schools will develop an EL pilot program to submit to the State Board of Education. (Photo by Kelsey Mo/Cronkite News)

But funding is difficult, and it comes down to what Mesa Public Schools can justify in the budget.

“People go walking through the school and they see a class of seven or eight (EL students) and they see another class of 40, it just doesn’t look like you’re allocating resources very wisely,” she said.

For the junior high level, the programs will need to be a minimum of 100 minutes, but Hinton Sainz worries resources for EL students might be cut because the requirement has been lowered. She said Rhodes is not heading in that direction, but she can see it happening at other schools.

“I just really hope districts realize that if they are worried about the achievement of their kids, and all kids, then you still need to support the kids one way or another,” she said.

Next year will act as a transition period where the schools will develop the program to submit to the State Board of Education. And despite the process ahead, Hinton Sainz said she sees a lot of potential with the new flexibility.

“I don’t have probably all the expertise of different possibilities for types of programs we could have that other people might have. So, I’m looking for resources – think outside the box,” she said.