‘A blind eye in medicine’: Bias can affect the health of patients of color

TEMPE – Doctors treat minority patients differently from others, with physicians less likely to send African-Americans and Hispanics to specialists for treatment, a University of Arizona researcher says.

Dr. Khadijah Breathett, a clinical scientist who also is a Tucson cardiologist, said unconscious bias, inconsistent training and a lack of racial and ethnic diversity among doctors leads to disparities.

“I’ve seen it in practice that patients who are black or a minority tend to get passed up as far as early diagnosis and treatment,” Glover said. “It’s almost a blind eye in medicine.”

Breathett conducted her study last year by analyzing 20 years of studies and interviews of physicians to understand the treatment choices they make. She concluded that the way physicians treat black and Hispanic patients affected the patients’ health. That’s likely due to physicians’ unconscious bias when they treat minority patients. 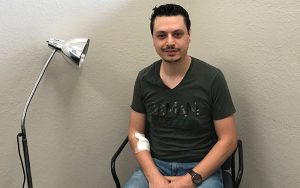 Mohammad Kayyali recalls seeking help at a hospital and watching the attitude of medical professionals shift when they heard his Arabic name. (Photo by Ashley Carter/Cronkite News)

“I believe that the majority of physicians mean to do well, mean to do the right thing with their patients,” Breathett said. “But it’s hard to see what’s unconscious unless you’re taking steps to become aware of the issue that you have.”

Reports on bias in the medical field, similar to those in other industries, mirror some of the findings in Breathett’s research.

A study done by Natalia Neha Kholsa, a student at the University of Chicago’s Pritzker School of Medicine, showed that clinicians rated white patients as more likely to follow treatment plans and more responsible for their health than black patients.

Minority patients spoke of subtle shifts in how doctors and other medical professionals treat them.

Joy Hale said doctors missed her serious illness. She outlined her symptoms to one doctor, then others, trying to find out what was wrong. 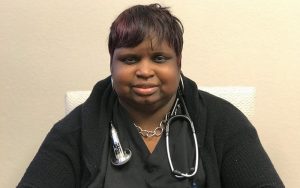 “I’ve seen it in practice that patients who are black or a minority tend to get passed up as far as early diagnosis and treatment,” says Dr. Jerwonana Glover, who runs a family medical practice in Tempe. “It’s almost a blind eye in medicine.” (Photo by Ashley Carter/Cronkite News)

Finally, her eye doctor diagnosed her with valley fever. By that time, the illness had progressed.

“It started with a cough, and before long, my organs were affected.”

“It really made me re-examine what I’m looking for in a physician,” said Hale, who’s a patient of Glover’s.

“I don’t think that just every doctor from every culture can handle the symptoms, the concerns or even understand fully the concerns that different cultures have.”

Another Glover patient, Mohammad Kayyali, spoke of seeking care at hospitals and watching the attitudes of medical professionals shift when they heard his Arabic name.

“They see the name – they’ll look at you and they’re like, ‘Oh you, Mohammad? OK, well, come this way,’ like they just want to get me out of there,” Kayyali said.

Subconscious bias can affect any doctor. Glover remembers when her own bias got in the way of treating one of her patients.

“He was a white, scrawny kid, and looked like he could have been on drugs,” she recalled.

Glover dismissed the man, saying she couldn’t treat him.

After leaving the exam room, the patient, who had been to other doctors, came to the front desk and urged her to look at his ribs.

A CAT-scan revealed he had pulmonary nodules throughout the lower lobe of his left lung, pushing his rib cage out and causing pain. He was gravely ill with valley fever.

“He was a near miss because of my biases, and my colleagues’ biases,” Glover said.

Breathett said realizing you have biases is a step toward combating them. Diversity training is taught in medical schools, but the amount and quality of training has been inconsistent.

“It’s a hard thing to address, especially when you don’t realize that the problem is there, or you don’t think the problem is real,” Breathett said. “There are a lot of people who say, ‘I don’t see color, I treat everybody the same.'”

Increasing the number of doctors from diverse backgrounds is another way to combat unconscious bias, she said.

According to a study by the Kaiser Family Foundation, 58.8% of medical school graduates are white. Blacks make up less than 6% of those graduates, Hispanics less than 5%.

But choosing doctors of the same race or ethnicity isn’t necessary to get good medical care.

Glover said all patients should shop for doctors, go to their practices and observe how they treat their patients and staff members.

And Breathett advises doctors to listen more carefully to their patients, and find a comfortable common ground to connect with them.

“What I tell providers, as well as patients, is to try to develop a relationship where there is trust so you can identify common ground, where you can see that person as your loved one,” she said.

“Even if the situation gets a little bit uncomfortable, you’re more willing to show empathy and show a lot of care with that person because it’s your family member or like a family member.”