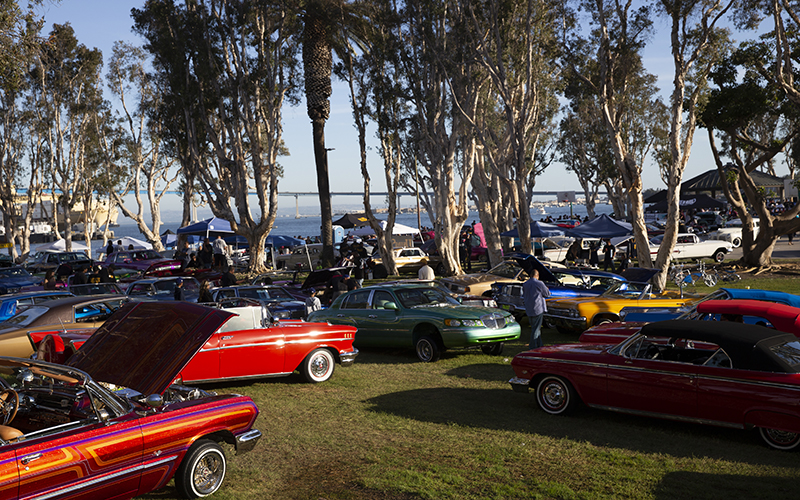 The annual Day at the Bay in San Diego showcases lowriders from car clubs across the Southwest, celebrating the unique culture surrounding the hobby. (Photo by Sam Leal/Cronkite Noticias) 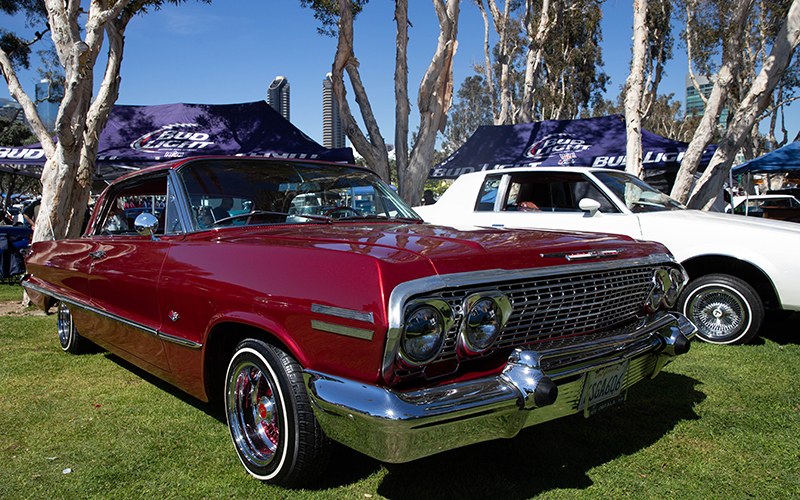 The Chevrolet Impala, such as this 1963 model, has long been a staple of the lowrider scene. (Photo by Sam Leal/Cronkite Noticias) 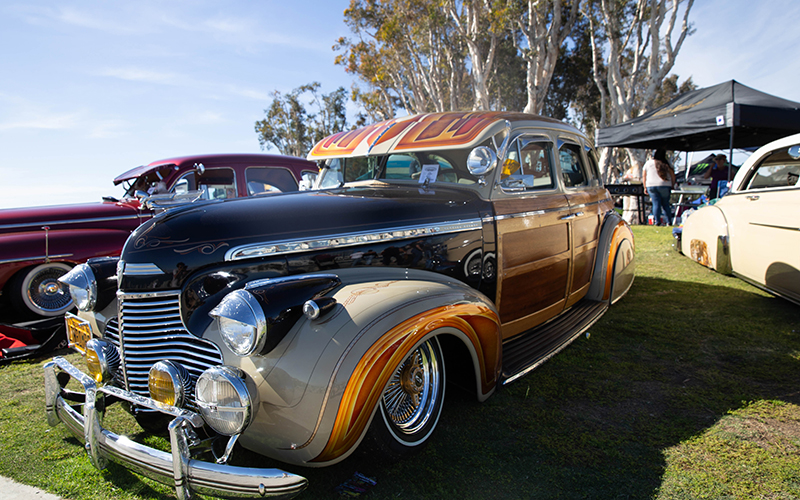 SAN DIEGO – The American Southwest is known for the meshing, coalescing and fusing of many cultures. Here, custom and tradition “no son ni de aqui ni de alla” (Spanish for “are neither here nor there”).

Nowhere is this better represented than in the lowrider culture, where lowering an automobile elevates its prestige and helps families bond over shared values and traditions.

Richard Ochoa, president of Society Car Club in Mesa and owner of Motorsport Showcase, an exhibition company, said lowriders are more popular than ever.

“This has happened because of the internet,” he said. “There’s mechanisms in place that let people who haven’t seen (the style) to participate.”

The Day at the Bay car show in San Diego speaks to Ochoa’s point. The show has been growing steadily since its inception in 2011, said its coordinator, Jose “Pelon” Alvarado.

From Mesa to the coast

Ochoa founded Society Car Club in 1980. This year, 18 members made the trip for the San Diego show. 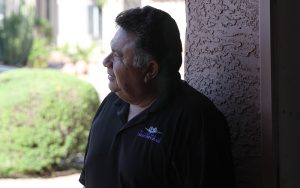 One of the 18 was Manny Sandoval, who wanted to showcase the family principles that Society prides itself in. The car Sandoval exhibited at this year’s event formerly belonged to his brother-in-law, whose death inspired the vehicle’s design.

“The car was made for him … he was my friend from childhood and we were passionate about lowriders,” Sandoval said. “We grew up around lowriders and always talked about his dreams and what he wanted to do to them.”

Seventy-six car clubs from Arizona, California and New Mexico participated in Day at the Bay, with the first two states being the most represented.

Latin Bombas of Imperial Valley, California, was among them.

“What we like is getting together with our families, our wives, our children and grandchildren. This is a family club,” Bombas member Manuel Molina said.

For Molina, taking part in the customs and traditions of lowrider culture goes far beyond customizing a slab of steel on wheels.

“It all comes together,” he said. “The way we dress, the way we talk … this is our culture, and that’s what we all represent.”

“Everyone thinks we’re nothing but gang members, but if you actually look at what we invest … that’s not true. We work, we provide for our families … and that’s what our culture is founded upon,” he said. “Time changes things, and we keep working to change that negative perception that people have of us.”

Molina is referring to the strong cultural links between lowriding and the pachucos, a subculture that started among young people of Mexican descent in the twin cities of El Paso and Ciudad Juarez, Mexico, in the 1930s and ’40s. Pachucos were known for their exaggerated zoot suits and flamboyant, sometimes rowdy, behavior.

Mexican-American youth saw the pachucos as a revolt against white society’s attempts to erase their Mexican roots, Ochoa said. However, much of white society associated the subculture with gang violence, crime and drug use.

Therefore, the pachucos identity focused on contradicting the cultural norms imposed by Anglo society. This is where the stylistic rebelliousness that shows in their clothing and demeanor was born.

It was not until the culture reached Los Angeles that the practice of lowering a car as close to the pavement as possible was developed in the mid-1940s.

This 1965 Chevrolet Impala Super Sport is equipped with the smaller wheels (and spinners) that are characteristic of many lowriders. (Photo by Sam Leal/Cronkite Noticias)

Not all lowriders have fancy paint and hydraulics – and not all are General Motors vehicles. This Ford Thunderbird is from the mid-'60s. (Photo by Sam Leal/Cronkite Noticias)

Some lowriders – and "gear heads" in general – display scale models of their pride and joy. (Photo by Sam Leal/Cronkite Noticias))

A cherry 1947 Dodge, part of the Latin Bombas club, has been lowered and fitted with "eyelids" over the headlights. The cylinder in the back window is an old-school evaporative cooler. (Photo by Sam Leal/Cronkite Noticias)

This 1987 Chevy Monte Carlo, owned by a member of City Car Club San Diego, is ready to get low and slow. (Photo by Sam Leal/Cronkite Noticias)

The Oldsmobile Cutlass is another General Motors ride that's popular with lowriders. This is a 1985 Cutlass Supreme. (Photo by Sam Leal/Cronkite Noticias)

The lowrider style is defined by its colorful paint schemes, elaborate graphics and undersize wheels on older, bigger cars – often Chevrolet Impalas, Oldsmobile Cutlasses and Buick Regals. Many incorporate designs that are rooted in Mexican culture, including Mayan and Aztec symbolism.

To get them low, the cars are equipped with powerful hydraulic systems that often allow owners to jack up the front, the back and either side – then drop the whole thing back to an inch of the blacktop.

Ups and downs for lowrider economy

The 1990s were a high point for Phoenix’s lowrider culture, said Luis Miranda, a mechanic in downtown Phoenix.

“People would cruise all along Central Avenue, all the way from the buildings to the mountains,” said Molina, adding that this custom was inherently rooted in Phoenix’s lowrider culture and its origins “in the late ’70s and early ’80s.” 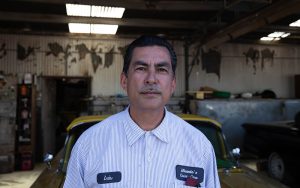 At 51, Luis Miranda considers himself one of the few lowrider mechanics in the Phoenix area. Today, there are no more than “seven or eight,” he says. (Photo by Sam Leal/Cronkite Noticias)

At 51, Miranda still manages his own car shop, Miranda’s Customs, which specializes in repairing and building lowriders. It opened in 1989.

Miranda said his is one of the few such shops left in Phoenix, thanks to the Great Recession, which began in 2007.

“Lots of (them) went out of business,” he said, noting that the total number of lowrider shops in Phoenix went from “about 20 or 25 to seven. There were very few people still investing money … I stayed because I’ve been in this business for many years and changing professions would have been very difficult.”

Miranda has great faith in his craft.

“I’m very proud of my work and it’s what I like doing,” he said. “What I’m interested in is using what God gave me … in the best way possible, to help people achieve what they want to have.”

Like Molina, Miranda also expressed a desire to change the way in which lowrider culture is generally perceived.

“People think we’re just gang members, that we sell drugs. But it’s not like that anymore. People have to change the way they view it because it’s like anything else … it evolves.”

Miranda said this cultural evolution is reflected in the international reach of lowrider culture: “There’s people in Japan, in Europe, in Australia that make lowriders.”

“But us Mexicans from the Southwest are the originators. No one can do it better.”