The sanctuary of the Benedictine Monastery, once a place of worship, now holds a slew of cots where migrants families sleep every night at Casa Alitas. (Photo by Nicole Ludden/Cronkite News) 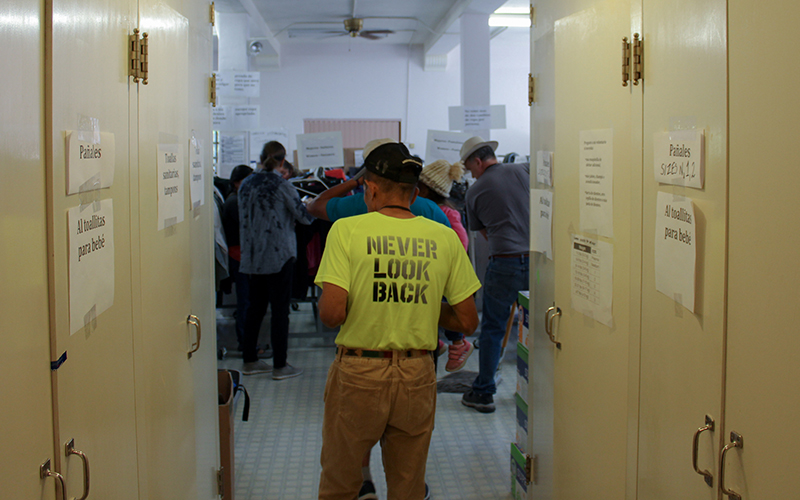 A man enters the clothing room at Casa Alitas. The shelter has a room full of donated clothing and shoes migrants can choose from. (Photo by Nicole Ludden/Cronkite News)

TUCSON – Dozens of families and children file into the wooden pews of the Benedictine Monastery in Tucson. A small child wearing a white men’s XL T-shirt clenches his mother’s hand while another plays peek-a-boo.

They sit inside the historic monastery’s spacious sanctuary – some gazing up at the grand dome and the four-pillared marble altar canopy at the front of the room.

Volunteers filter through each row of pews, offering reassuring smiles as they take families to further medical processing in separate areas of the church. This is the first step in the path each family takes as Casa Alitas, a program within Catholic Community Services, assesses their personal needs.

A Tucson developer bought the property in 2018, but it sat empty while he waited to begin building apartments around the monastery in early fall. The owner has allowed Casa Alitas to use the monastery since January, taking in hundreds of migrants weekly to provide personalized care in the often complicated asylum process. Just last Saturday, Casa Alitas housed 420 migrants in the monastery.

The migrants are led through a series of stations throughout the monastery, from an intake room that processes the families for their specific needs to a transportation check in location that aligns migrants’ departure from the shelter with another sponsor in the United States who can house them.

Migrants often enter Casa Alitas with hardships, but they leave with fresh sets of clothing, care packages of food and water and personalized guidance through the asylum process.

Because of a spike in the number of migrants entering the U.S., which has increased each month since October 2018, the overwhelmed Immigration and Customs Enforcement has depended on churches, shelters and even bus stations to house migrants seeking asylum until they can find more permanent shelter – most often with family members already in the U.S.

The migrants’ experiences vary, and they often face harsh conditions: Officials had detained some in an enclosure under a bridge in El Paso and dropped off others outside bus stations. But the organizers at Casa Alitas want to provide a different narrative for the migrants who walk through the arched doors of the former Benedictine monastery.

Not only are the migrants surrounded by the grandeur of the building, which was completed in 1940 in the pre-WWII Spanish Revival style, but about 150 volunteers see to their needs – from baby food and toothpaste to help securing a bus ticket.

“We’ve been able to meet the needs of the families as they come through here,” Casa Alita’s program coordinator Diego Pina Lopez said. “We welcome them to this sanctuary and say, ‘This is not the government. This is volunteers. We’re here to help you, and it kind of reassures them that way.”

Migrants arrive at the monastery after initial processing by ICE or U.S. Customs and Border Protection. Often, their shoelaces are removed and they have tracking bands affixed to their wrists. They carry their belongings in plastic bags.

Most of the migrants are mothers, children and pregnant women from Guatemala, Honduras and El Salvador, and they have traveled for days or weeks, according to Catholic Community Services of Southern Arizona.

“Pretty much every single person that comes through here is a parent with a child or a mom with multiple children, or sometimes it’s a couple with children. Many people have been hurt on the way in multiple ways. People who’ve violated trust or betrayed them or stolen from them,” said Kat Rodriguez, an intake coordinator at Casa Alitas. “All we can do is show them kindness and compassion.”

Diego Pina Lopez, the program coordinator for Casa Alitas, speaks in the indigenous languages room of the monastery. Volunteers dedicate their time addressing the unique issue of language barriers with migrants, many of whom speak only indigenous languages. (Photo by Nicole Ludden/Cronkite News)

A family lies on one of the American Red Cross cots scattered across the sanctuary of the Benedictine Monastery. Casa Alitas houses migrants here after providing them with a variety of services, including medical attention. (Photo by Nicole Ludden/Cronkite News)

Casa Alitas accepts drop-off donations outside of the property. “We’re always in need of a variety of things, and it’s always changing. As well as the basics, things that always pop up are underclothing for children and adults, smaller sized clothing,” program coordinator Diego Pina Lopez said. (Photo by Nicole Ludden/Cronkite News)

One room at the monastery serves as the last stop before migrants leave to join family or friends as they await an immigration hearing. All migrants are provided with the proper travel ticketing, food and car seats for children before they leave. (Photo by Nicole Ludden/Cronkite News)

The Benedictine Sisters purchased property on Country Club Road in the mid-1930s and laid the cornerstone of the monastery in 1939. The new owner is allowing Casa Alitas, a volunteer program within Catholic Community Services, to house hundreds of migrants there every week. (Photo by Nicole Ludden/Cronkite News)

When Casa Alitas receives a group of migrants, volunteers direct them into the sanctuary and give them an orientation. For many, it’s the first time they’re able to take a deep breath after the long journey to the United States.

“We invite them into the monastery. We take a medical evaluation here,” Pina Lopez said. “If there’s anything that deserves or warrants more screenings, we take them to another room and determine if they should get services here or off-site.”
The Casa Alitas team has an intake coordinator process each family to assess their specific needs.

“Part of it is to flag if there’s anything that we need to try and get them extra support for, particularly if they’ve encountered some sort of violence that might need some extra support or medical attention,” Rodriguez said.

Rodriguez said the families she works with every day are not in the United States illegally, but are in the legal process of claiming asylum.

“They’re not undocumented. These are folks that are in process,” Rodriguez said. “I think one of the most frustrating comments I hear is people saying, ‘Why can’t they just do it the right way?’ This is literally the right way.”

The U.S. allows people who have fled their country and who are seeking legal protection in the U.S. to apply for asylum, and there’s no way to ask in advance, “you just have to show up,” according to Olga Byrne, the International Rescue Committee‘s director of immigration.

After ICE processes the migrants, they usually stay at Casa Alitas for one to three days until they can travel to sponsors throughout the country – usually friends or family members who already are established in the U.S.

“You are making your request for asylum and you’re given a court date and you get your day in court. So, we’re just getting folks to a sponsor who’s going to take care of them,”Rodriguez said.

Victoria Ortiz, a Casa Alitas volunteer, said she immigrated from Chile in 2005. She volunteers mainly in the transportation department, coordinating migrants who are leaving the shelter.

“The first thing is a call to a family member. Then, we wait until that family member has bought either a bus ticket or a plane ticket for them,” Ortiz said in Spanish.

Casa Alitas then coordinates a driver to take the migrants to the bus station or airport.

As a fellow immigrant and mother, Ortiz said she feels a special connection to the asylum-seeking families who come across her desk.

“Sometimes it touches me a lot from mother to mother,” she said. “I am a mom, and I think I would do the same thing for my own son. As an immigrant, I, too, left my country behind, and it wasn’t easy to leave everything behind.”

Ortiz’ son, Isaac Carrasco Ortiz, also volunteers at Casa Alitas after his mother introduced him to the organization a year ago.

“I’m also a migrant, and I came here when I was a little boy. When I see the kids that are running around, I always think about myself in that position, because that was me at one point,” Carrasco Ortiz said. “I feel like it’s less of a ‘I have to do this because it will make me a good person,’ but rather, I like to do this because these people deserve something better in life.”

Carrasco Ortiz said he considers himself a jack of all trades at the shelter, as he volunteers in all roles, from transportation to packing food in the kitchen.

After volunteering at the shelter for more than a year, Carrasco Ortiz said he believes negative sentiments about migrants claiming asylum in the U.S. are based on misinformation.

“I’d invite people to sit down and talk with them,” Carrasco Ortiz said. “I respect their opinion as well, but I would just like them to at least see the situation that’s unfolding before them.”

“The asylum program is a scam. Some of the roughest people you’ve ever seen, people that look like they should be fighting for the UFC,” Trump said during a news conference at the Republican Jewish Coalition.

City Councilman Steve Kozachik, who represents Ward 6, where the monastery is located, says there have been initial run ins with protesters who are also against the presence of asylum seekers in the United States.

He believes these protests were misguided efforts.

“The people who are protesting are doing so on the basis that they believe the people at the monastery are there illegally. Nobody at the monastery is illegally in the United States,” Kozachik said. “We are providing a life-affirming service to these people who have nothing but tragedy in their lives up until now.”

However, Kozachik said in early September, the monastery will be forced to close its doors when developer Ross Runley begins constructing apartments around it.

Councilman Kozachik said he convinced Runley to house migrants at the monastery when the developer initially wanted to turn the historic building into student housing. Runley allows Catholic Community Services to occupy the monastery for free and pays its utilities, but is still “proposing about 50-foot high-end apartments surrounding the monastery,” according to Kozachik.

“What I don’t want to hear in September is Ross rolling through 400 migrants out on the street. At some point in the early fall, the access to the building goes away because it turns into a construction zone,” Kozachik said.

Kozachik said the monastery will be open for public use after construction, but he is working on finding other places asylum seekers can get the support so many have received at the monastery.

“I’m working now with school districts and fire stations and nonprofits to find a way to transition what’s happening in the monastery to other locations. There won’t be a single one because there’s no facility with a single footprint that this one has,” Kozachik said. “We will not be able to replicate what we’re doing in the monastery anywhere else, because we’re doing so much here.”

Volunteer Carrasco Ortiz said he would like people who view migrants negatively to have a conversation with one of them. His hope is that some common ground can be found.

“That’s like the bottom line, that we’re all the same,” he said. “No matter what happens, no matter what we go through, we’re all human beings and we all have a heart and a brain. They deserve people to help them.”