“ICE has done a number of things that make it more difficult to coordinate care,” says Michael Stancliff, a volunteer for the Restoration Project. (Photo by Austin Westfall/Cronkite News) 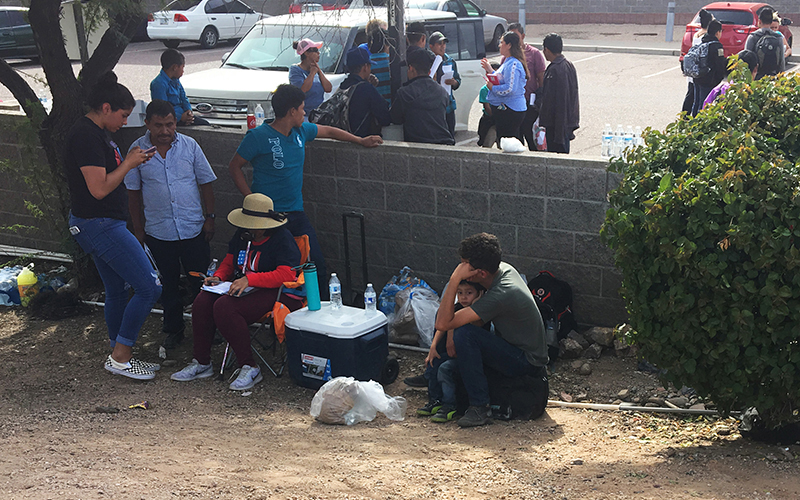 “These people are made in the image of God. They are not less than us. They are humans. They deserve basic human needs,” says Melissa Hubert, a volunteer with Redemption Church Alhambra. (Photo by Molly Stellino/Cronkite News)

PHOENIX – The 100 or so migrants, ranging from toddlers to elders, were hungry, thirsty and did not know where they were as they stood outside a Greyhound bus station last week. Dropped there by immigration authorities, they were awaiting the next step to reunite with their families.

“They’re in unsanitary conditions on dirt, rock floor next to construction and bulldozers,” said Melissa Hubert, a volunteer who witnessed the scene. “There’s danger every which angle you look. There’s kids without shoes. There’s babies that have no diapers. There’s women without feminine products.”

Hubert, a member of Redemption Church Alhambra in central Phoenix, frequently volunteers to assist migrants after Immigration and Customs Enforcement releases them from detention until their cases can be decided. She said she often plays games with rocks to help take the children’s minds off the situation they’re in.

Hubert said most of the migrants at the bus station had entered the United States seeking asylum from violence in Guatemala, Colombia or Honduras. She said all of them have family in other areas of the United States.

The hardest part, she said, is reuniting them.

The influx of stranded migrants, Hubert said, has come after Greyhound told ICE earlier this month to drop off migrants outside their stations instead of in Greyhound parking lots. The company also said that all people must wait outside the station until they purchase a bus ticket.

Crystal Booker, communications specialist for Greyhound, said the company doesn’t have the appropriate facilities to process migrants after they’ve been dropped off by ICE.

“The unexpected arrival of dozens of people, many with no travel arrangements, is a concern as we do not have the resources to house individuals for extended periods of time,” she told Cronkite News in an email.

But the bigger problem, volunteers said, is that ICE no longer allows migrants to make travel arrangements before they’re freed from detention.

In a written response, ICE spokeswoman Yasmeen Pitts O’Keefe said the number of asylum seekers has overwhelmed the abilities of ICE and Customs and Border Protection.

“In light of the incredibly high volume of FAMUs (family units) presenting themselves along the Arizona border, ICE no longer has the capacity to conduct these reviews without risking violation of the Flores limitations on lengths of stay for minors in both CBP and ICE custody. To mitigate that risk, ICE began to curtail such reviews in Arizona beginning Sunday October 7.” 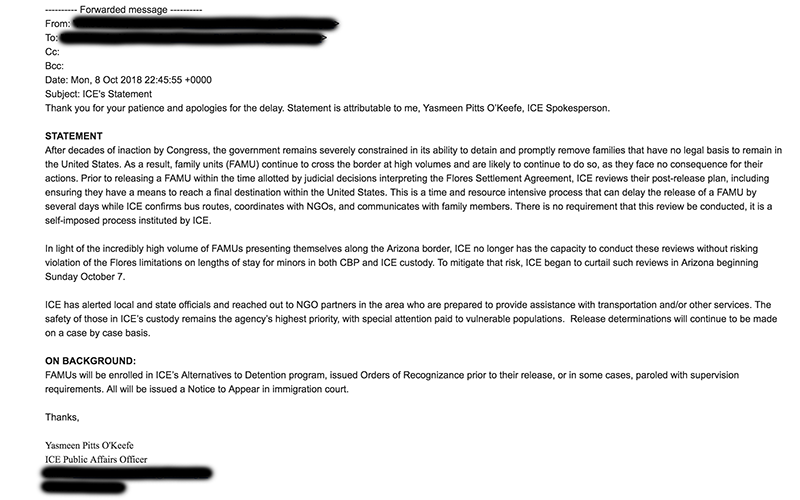 Before Greyhound made its request to ICE earlier this month, migrants were able to use Greyhound restrooms and seek shade in the stations. In Phoenix, they’re now left on patches of dirt alongside a busy street and construction zone.

Michael Stancliff, a volunteer with the Phoenix Restoration Project, an organization that provides services to immigrants after release from detention, said that not allowing migrants to make travel arrangements puts more pressure on volunteers.

“Many more of them (migrants) end up having to stay a day or more in Phoenix because by the time they get out and make their arrangements, they’re not even leaving until the next day or the next,” Stancliff said. “Lots more resources are necessary because people being let out of detention are on average staying much longer.”

He said the Restoration Project is imploring ICE to return to its previous practice of allowing migrants to make arrangements before being released from detention.

“Our position is, it’s more the responsibility of our government to provide a humane way to receive asylum seekers and other migrants.” Stancliff said.