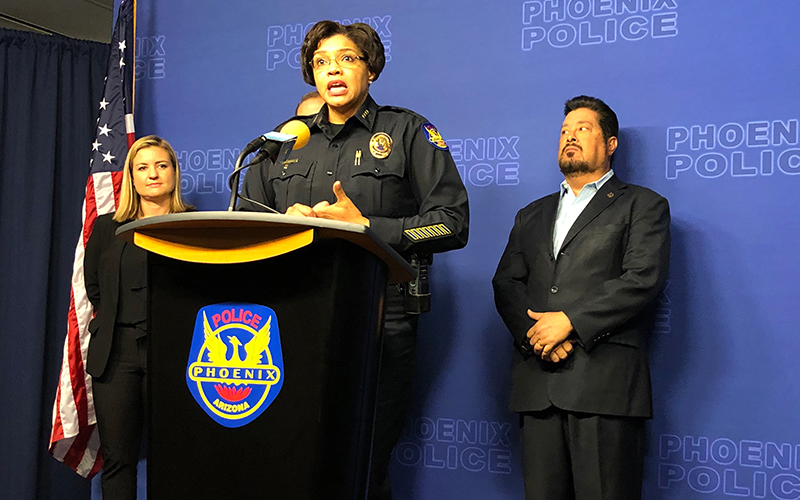 Police Chief Jeri Williams, flanked by Mayor Kate Gallego and Councilman Michael Nowakowski, says the department wants to work more closely with behavioral health and crisis-response organizations. “A tangible example could be and include the mental health professionals riding side-by-side in a car with a patrol officer or crisis intervention team squad.” (Photo by Hailey Mensik/Cronkite News)

PHOENIX – Police officials on Friday said a growing number of 911 calls involving people with mental health issues has led to a spike in officer-involved shootings.

Mayor Kate Gallego, pointing to a National Police Foundation report on the use of deadly force, called for an increase in mental health services to better serve the community and mitigate police involvement.

“It is something our officers deal with on a daily basis,” Gallego said at a news conference. “We responded to at least 4,100 suicide calls in the last year, and we had 12,500 people who we brought to behavioral health facilities.

“The closest patrol officer is not always the best person to respond to some of these calls.”

The city commissioned the report after averaging 21 officer-involved shootings a year from 2009 to 2017, which rose to an “alarming increase” to 44 last year.

Phoenix Police Chief Jeri Williams said many of the calls the department receives could be rerouted to better resources.

“When we get calls such as a family member who says that their loved one is having a mental health episode, or he or she has forgotten to take medication or he or she is high on something, is that necessarily the right call that the Phoenix Police Department should go on?” Williams asked.

She said the department wants to work more closely with behavioral health and crisis-response organizations.

“A tangible example could be and include the mental health professionals riding side-by-side in a car with a patrol officer or crisis intervention team squad,” she said. “There are numerous instances when we’re called upon to engage with people dealing with mental health issues, and although each of us are trained to some degree, and there are two dedicated crisis intervention team squads, it still remains very challenging.”

Jim Burch, president of the National Police Foundation, a nonprofit that conducted the study of 2018 shootings, said it centered on a key question: “What is it that we need to know to stop these tragedies?”

The study also found an increase in the number of officer-involved shootings in which a single officer responded to the scene.

Burch said the number of officer-involved shootings with a single officer responding in Maricopa County increased last year to about 41 percent, up from an average of 26 percent in previous years.

“This is consistent to some degree with what officers shared with us about their concerns about being the only one who can arrive on scene in time to handle and incident that may become” an officer-involved shooting, Burch said.

“While this does not justify in and of itself the use of deadly force, it certainly has an impact on officer decision making, as well as officer safety considerations,” he said.

Williams and Gallego said they will form a work group to evaluate how to implement the recommendations, including transparency. The department on Monday started equipping most of its officers with body cameras that automatically turn on when a patrol officer steps out of a car.

Among the report’s nine recommendations are documenting when police point their guns at someone, more consistent data collection and making that information accessible to the public, and improving police training in handling cases involving people with mental health issues or other disabilities.

The group also would determine whether the police department has enough officers to respond to calls and to provide adequate backup.