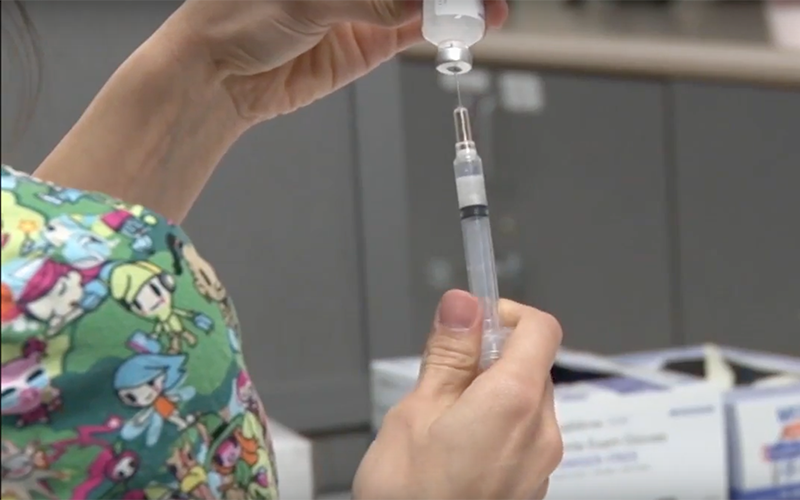 Arizona is one of 17 states allowing personal exemptions to vaccinations. (File photo/Cronkite News)

PHOENIX – The Arizona Department of Health Services issued a report on Friday warning that higher exemptions from vaccines are putting the state at risk this year for an outbreak of such preventable diseases as measles and mumps.

Immunization information is reported for three grade levels of children, but the health department uses the kindergarten coverage rate for measles, mumps and rubella (MMR) to indicate how protected an area is from those diseases. Officials consider the general threshold of immunity for such preventable diseases as 95 percent in a community, providing herd immunity from the spread of a disease.

“When we see coverage dipping below 95 percent for that vaccine, we know that Arizona is at a risk for measles outbreak specifically, and that certainly is one of the most severe diseases that we track,” said Jessica Rigler, assistant director for public health preparedness for the health services agency.

The MMR kindergarten immunization rate fell to 93 percent his year. In northern counties with historically high personal exemption numbers, that rate is much lower. Only 83 percent of kindergarteners are vaccinated for MMR in Yavapai County, according to health services data.

It’s not clear why personal exemptions are significantly higher in central and northern Arizona counties, Rigler said, but she noted a trend in certain demographics to not vaccinate children.

“We know that these are individuals with a typically higher education level, higher socioeconomic status, so there is sort of an income-education association,” she said.

Counties at the border have much higher immunization rates, all over the 95 percent threshold.

Arizona is one of 17 states allowing personal exemptions to vaccinations. Vaccines are mandatory for all grade levels, but DHS only requires schools to report immunization rates for students in preschool, kindergarten and sixth grade unless a doctor exempts them because of medical reasons or a parent exempts them because of personal, philosophical or moral objections.

“I just don’t see any other alternative than to get rid of the personal exemption,” he said.

ADHS reports 60 percent of counties in Arizona are now at risk for a measles outbreak. Only 4 out of 10 kindergartens are above the necessary threshold to be considered immune.

Measles is considered to be eradicated from the U.S., classifying it as an imported disease. People who get the disease often get it from visitors who have traveled here from other countries or from traveling internationally.

Measles is highly contagious, with 1 in 4 people hospitalized, according to a New York state study.

“If you are in a room of 10 people who are unvaccinated against measles and someone with measles walks in, nine of those 10 people are going to get sick,” Rigler said.

This year, 17 cases of mumps and one case of measles have been confirmed in the state, according to the health department.

This story has been updated to accurately reflect state policy for immunizations. Vaccines are mandatory for all grade levels. The Arizona Department of Health Services only requires schools to report immunization rates for students in preschool, kindergarten and sixth grade.