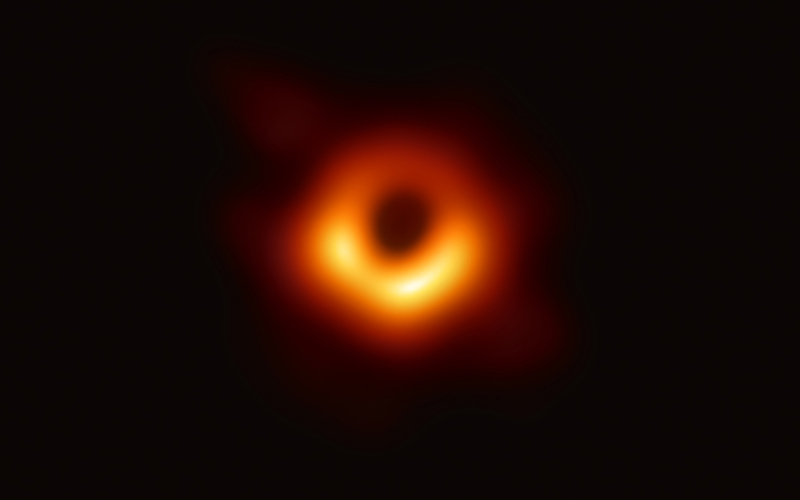 The first-ever image of a black hole, an object in space that is so densely packed that not even light can escape its gravitational pull. University of Arizona researchers were on the global team of scientists that spent years to see “the unseeable.” (Photo by Event Horizon Telescope/National Science Foundation) 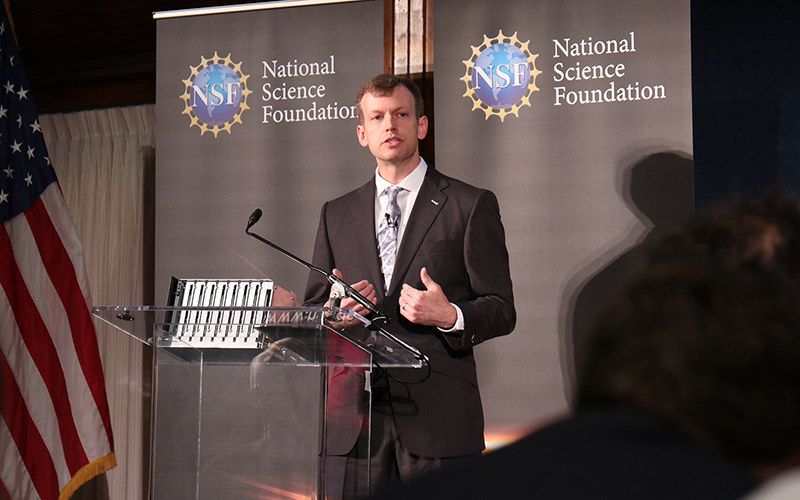 Dan Marrone, a University of Arizona associate professor, compared the massive amount of data that had to be collected by the Event Horizon Telescope team to the amount that would be needed to store “all of the selfies that 40,000 people will take in their lifetime.” (Photo by Andrew Howard/Cronkite News) 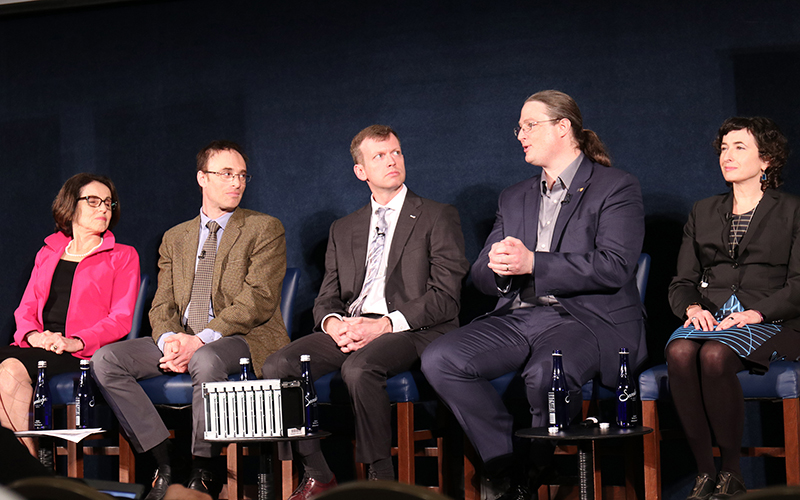 WASHINGTON – They said they had “seen the unseeable,” and when astronomers Wednesday unveiled the first-ever pictures of a black hole deep in space, the audience erupted in applause.

“It was incredibly exciting,” to be there when the image was captured, said Lia Medeiros, one of the University of Arizona researchers in the years-long project that synchronized telescopes around the world for a shot of what had only been a theory before.

“We all got together in a room, everybody had their laptops and we all pressed the button together,” Medeiros said. “The first time anyone actually got an image that looked like something we were all super excited, everyone huddled around the laptop.”

What they saw was an image of the black hole in Messier 87, a galaxy 55 million light years from Earth in Virgo, captured after years of work by the Event Horizon Telescope team, which involved hundreds of people and eight synchronized radio observatories.

“It is exciting, it is beautiful, it is a big relief,” said Dimitrios Psaltis, a UA astronomy professor and project scientist for the Event Horizon Telescope, after the National Science Foundation event in Washington that released the photo. Similar events were held at the same time around the world.

A black hole is super-dense matter, often from the collapse of a star, with gravity so powerful that even light cannot escape.

The image released Wednesday shows a bright orange-red ring, the event horizon or “point of no return” surrounding the circular black hole, a shape that supports predictions based on Albert Einstein’s equations and general theory of relativity.

“The Einstein equations are beautiful,” said Avery Broderick, physicist and associate professor at the University of Waterloo in Ontario, Canada. “Sometimes the math looks ugly, but there’s a really strong aesthetic in theoretical physics.”

“In my experience, nature wants to be beautiful, and that’s one of the striking elements of Einstein’s description of gravity,” Broderick said. “It is fundamentally one of the most beautiful theories that we have. For that reason alone, and the long history of Einstein being proven right, I suppose we’re not terribly surprised.”

But that proof did not come easy.

Sheperd Doeleman, director of EHT and an astrophysicist at the Harvard-Smithsonian Center, said the array of telescopes used had the “highest resolution possible on Earth,” the equivalent of being able to read the date on a quarter in Los Angeles from Washington, D.C.

Eight radio telescopes were involved, in Arizona, Hawaii, Chile, Spain and Antarctica. It took years of work just to synchronize the telescopes.

“Getting the sites to work isn’t the end of the process,” said Dan Marrone, an associate professor at UA and a co-investigator for the project. “We also had to test them all because you really only get one shot.” 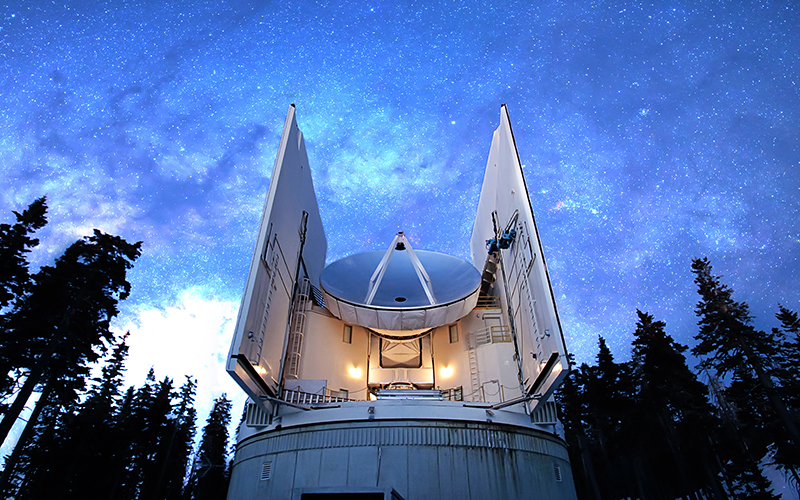 The Submillimeter Telescope on Mount Graham in Arizona was one of two telescopes managed by University of Arizona researchers, and one of eight used worldwide for the Event Horizon Telescope. (Photo by David Harvey/National Science Foundation)

UA graduate student Junhan Kim traveled to Antarctica to help set up hardware that synchronized the telescope there with the others.

Even with the hardware functioning, and no glitches, the project needed good weather at the same time on four continents to work.

The team then had the challenge of storing the data, which totaled five petabytes. One petabyte is the equivalent of 1,000 terabytes. Marrone said amount of data collected by the project is the same as 5,000 years of MP3 files or “all of the selfies that 40,000 people will take in their lifetime.”

When the project first started, Psaltis said, there was no way to store that much data.

“Five years ago you couldn’t store five petabytes worth of data,” he said. “We had a very big appetite … and thankfully technology evolved as quickly as we could do it.”

Even then, the photo had to be assembled from those petabytes of data and made small enough to process into the picture unveiled Wednesday.

“We have seen what we thought was unseeable,” Doeleman said. “We have seen, and taken a picture, of a black hole.”

Chi-Kwan Chan, a UA astronomer who was involved in computing infrastructure and image reconstruction for the project, said “there were many nights without sleep” during the project. But he said the work has just begun.

“A lot of science will come out of it,” Chan said. “This is only the beginning. With our data, when we dive more into them, we will learn a lot more about the black hole, especially the magnetic fields.”

Psaltis echoed Chan, saying “this is where the fun starts.”

“I think because this (image) is the first thing that we saw, we only paid attention to the things we were very careful and positive about,” he said. “I’m looking forward to go deeper into the details now and to look for the unexpected.”