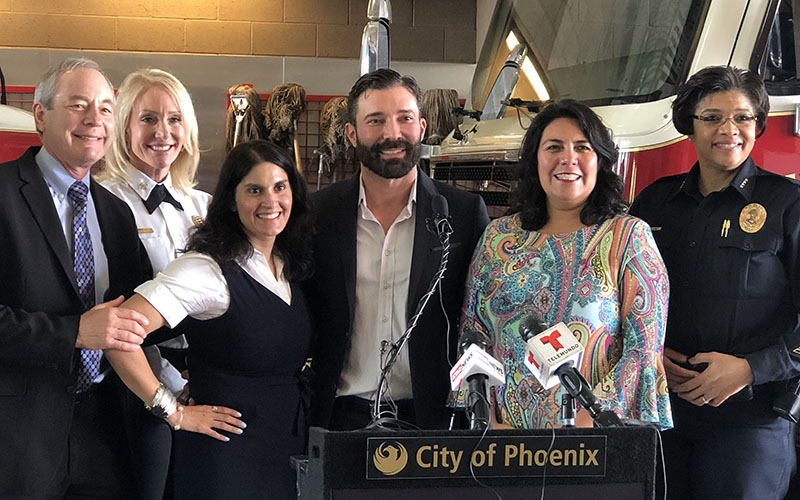 PHOENIX – A joint cancer screening program for Valley police and firefighters that began in November has detected two cases of prostate cancer, two cases of skin cancer and a thymus tumor, but all were caught early enough to successfully treat, officials said at a news conference Thursday.

The partnership between the city and Vincere Cancer Center of Scottsdale, which was spearheaded by Councilwoman Laura Pastor, so far has screened 132 firefighters and 32 police officers free of charge, according to Dr. Vershalee Shukla, a radiation oncologist at Vincere.

The screenings may have saved the life of Jason Underwood of the Chandler Fire Department.

“They found a tumor right in the center of my chest,” Underwood said at the news conference. “I didn’t have any symptoms … I just wanted to get checked out and, fortunately, being able to have that access helped us find it early. … I personally think this is an awesome outcome.”

The screening found a tumor in the chest of Jason Underwood of the Chandler Fire Department. It was caught early and removed. (Photo by Julio Lugo/Cronkite News)

Lung screenings had the highest number of detections, with 41 nodules found.

Underwood was lucky to have been allowed to undergo a low-dose computed tomography scan for lungs.

“Low-dose lung CT wasn’t even approved for lung cancer” until recently, Shukla said. “In 2014, it got approved in smokers who are at least 55 years or older, but because there’s so many young first responders in this state and other states (that) are getting lung cancer, we opened it up and started screenings for first responders at the age of 40.”

That allowed Shulka to find Underwood’s tumor and treat him without chemotherapy or other harsh procedures.

“The general population has about a 42 to 45% susceptibility to cancer,” she said. “We’re finding in the American fire service that 65% of firefighters are at risk of having cancer. I look at it as you take an oath and put on a blue shirt, you’re raising your risk of cancer by nearly 25% … so early detection is the key.”

In response to stress, Dr. Pablo Prichard said, the body releases cortisol, a hormone that can depress the immune system and make first-responders more susceptible to cancer.

Vincere Cancer Center has partnered with Deepak Chopra Interspace to help police officers and firefighters deal with the intense pressures of their jobs.

“With Deepak Chopra techniques, including yoga, meditation, therapies and grounding, we’re trying to reduce the stress of the first-responders to again help their immune systems,” Prichard said.

Pastor hopes to eventually offer these free screenings and preventive measures across the nation. She and her partners plan to install “grounded meditation centers” in all 59 Phoenix firehouses by the end of the year.

Pastor reached out to Kalkbrenner and Police Chief Jeri Williams after Vincere Cancer Center officials told her about the health risks of first-responders.